Happy to be in Hong Kong

Our flight from Chengdu to Hong Kong was delayed by an hour, arriving into HKG at about 8PM and putting us into Kowloon at 9PM.  Ordinarily, this would not be a big deal, but every night from 8-8:15, Hong Kong’s skyline comes alive with their Symphony of Lights, so we missed it on this first night — not a huge deal because it runs every night….

…however, we had booked a harbor view executive suite (with knee to ceiling windows) at the Intercontinental — which is the preeminent hotel for harbor viewing and one of my all time favorites — to watch the show.  Sigh.  So we missed that opportunity because we were just staying there a single night before moving to the HK Island side. (**Hong Kong Phooey was a cartoon from 1974.  No relevance here other than the disappointing timing and catchy name and theme song)

But, we still enjoyed the pretty lights of the Hong Kong buildings that evening from our room: 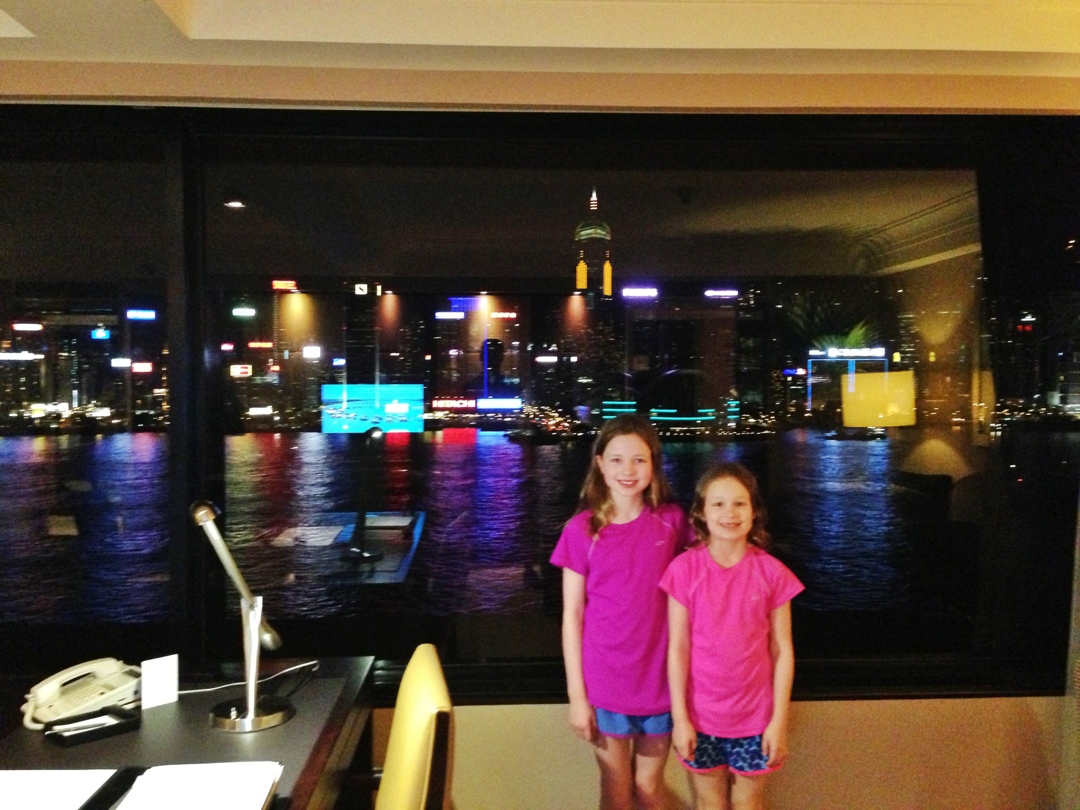 We had a nice and relaxing dinner — including all the things you are not supposed to eat while in China such as fruits and vegetables without a peel —  at the hotel’s restaurant which had these cool light-up menus (not iPads). 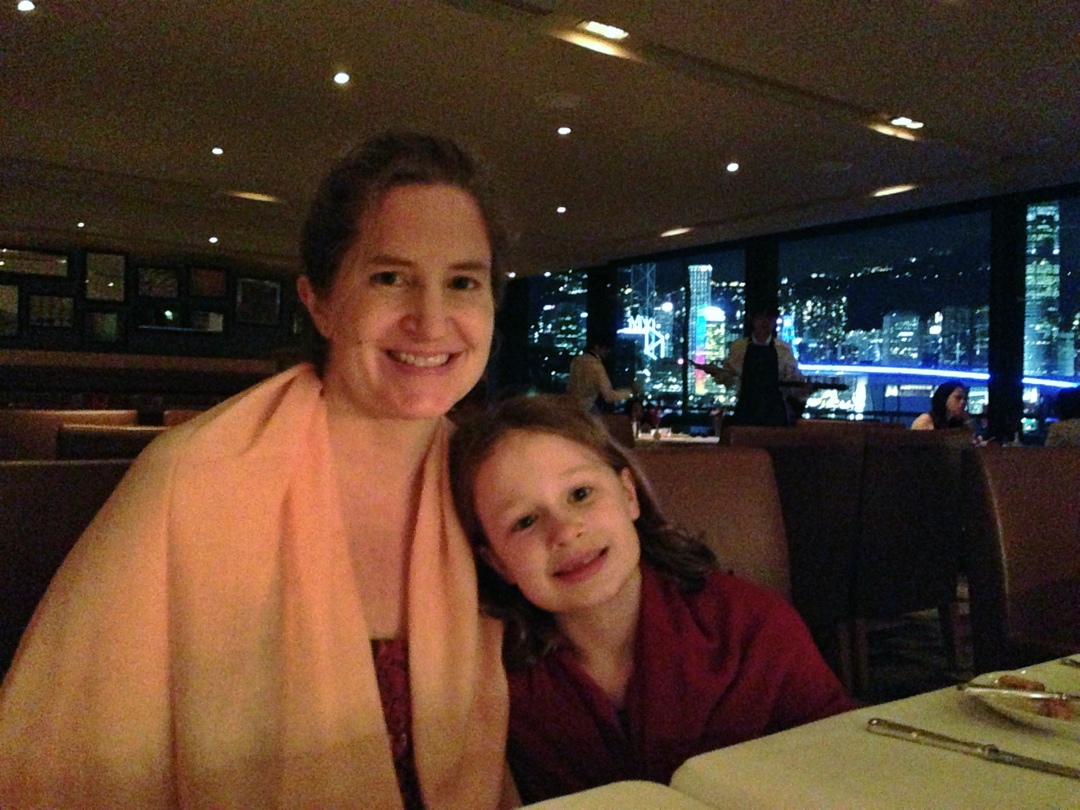 In the past Hong Kong (and the Intercontinental, especially) has always been the bookends of my trips to mainland China (thanks, Ralph!) .   The rooms are great, the food is safe, the views are amazing, and this hotel is 5-stars all the way. 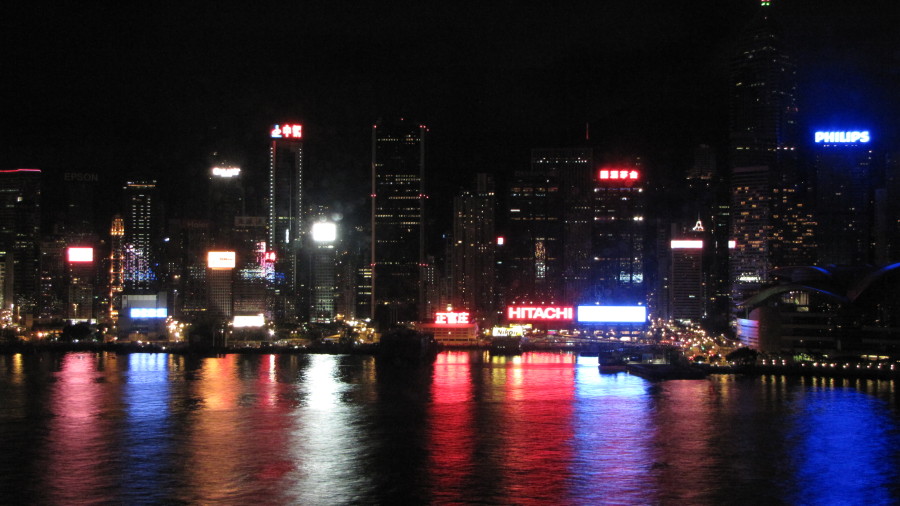 The next morning we woke to blue skies (in the 6 previous times that I’ve stayed here, I have never seen blue skies!), and with a late 2PM checkout secured, we had a late, leisurely, and awesome breakfast buffet before returning back to our room to just relax — no tours to take, no sweltering heat to battle, no flights to catch — nothing but the amazing view that continued to unfold out the window. 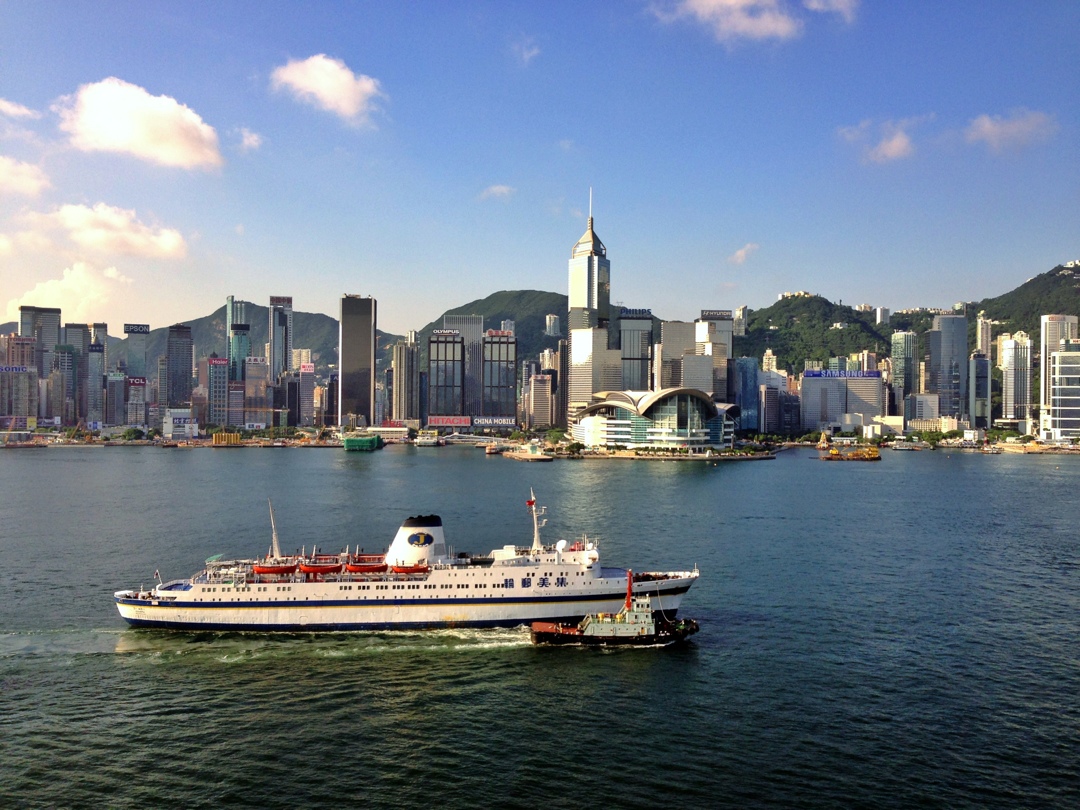 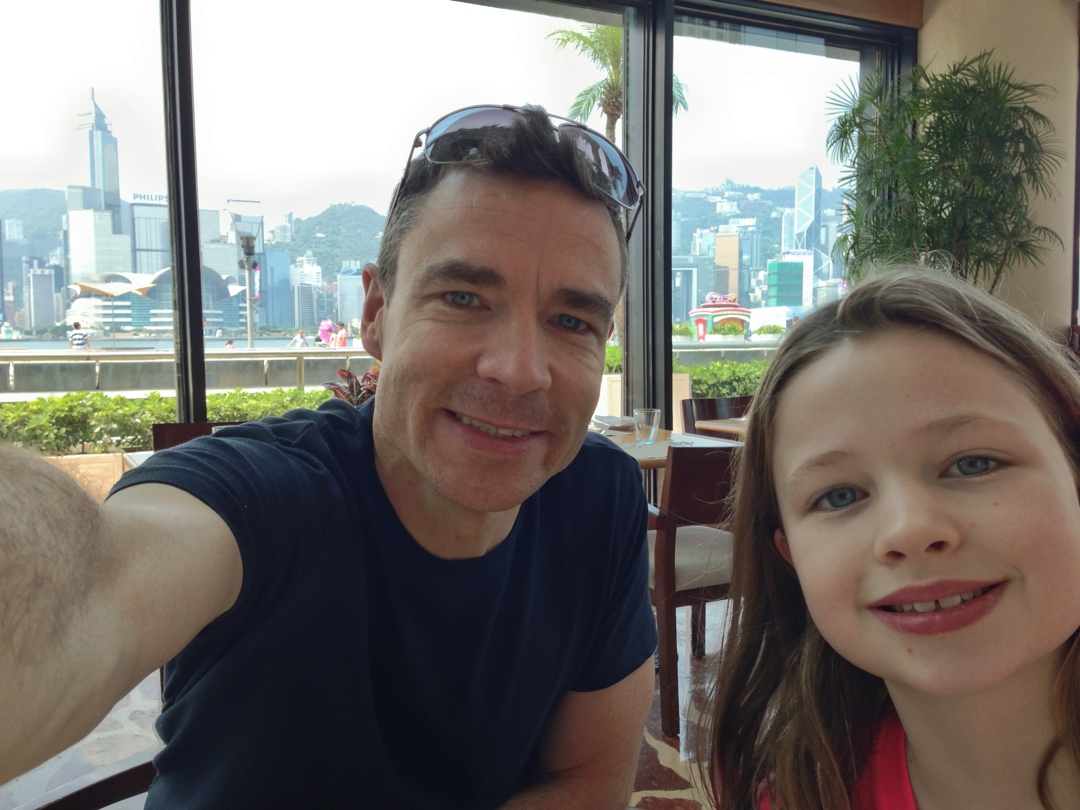 From the breakfast buffet 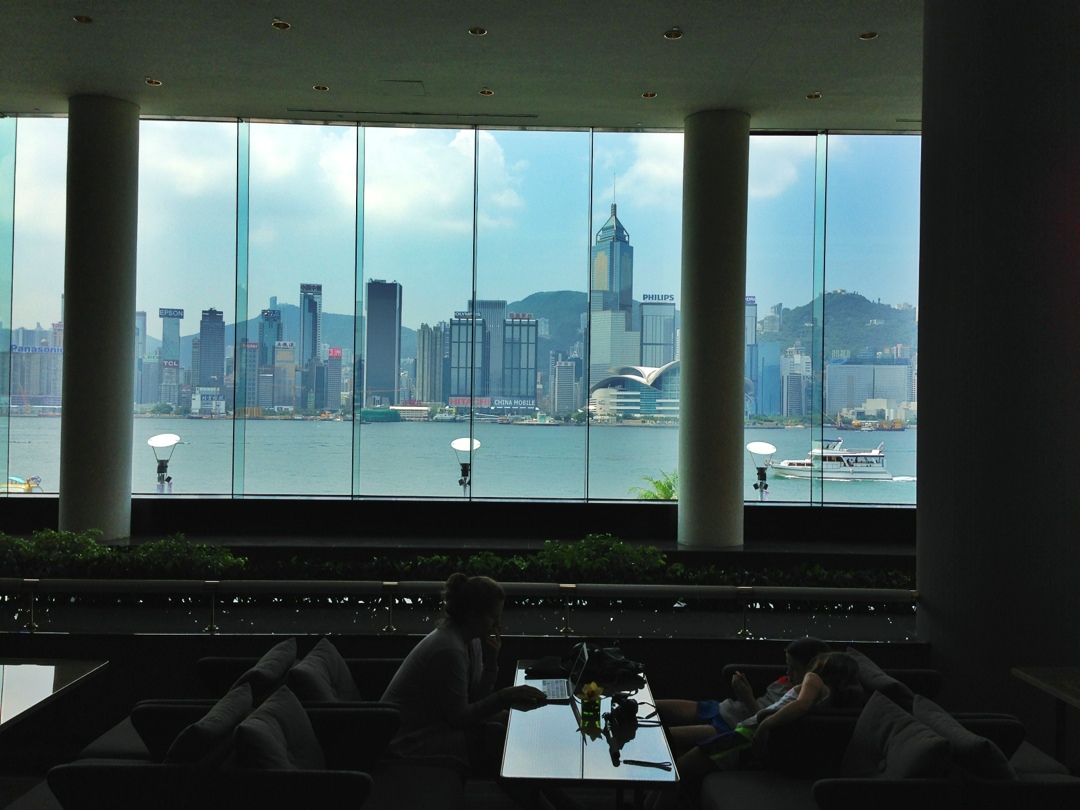 Our editing staff hard at work in the lobby

It’s easy to sit and just stare out the window, watching the harbor traffic go by.  Barges, fishing junks, cruise ships, ferries, and cargo ships are among the vessels. 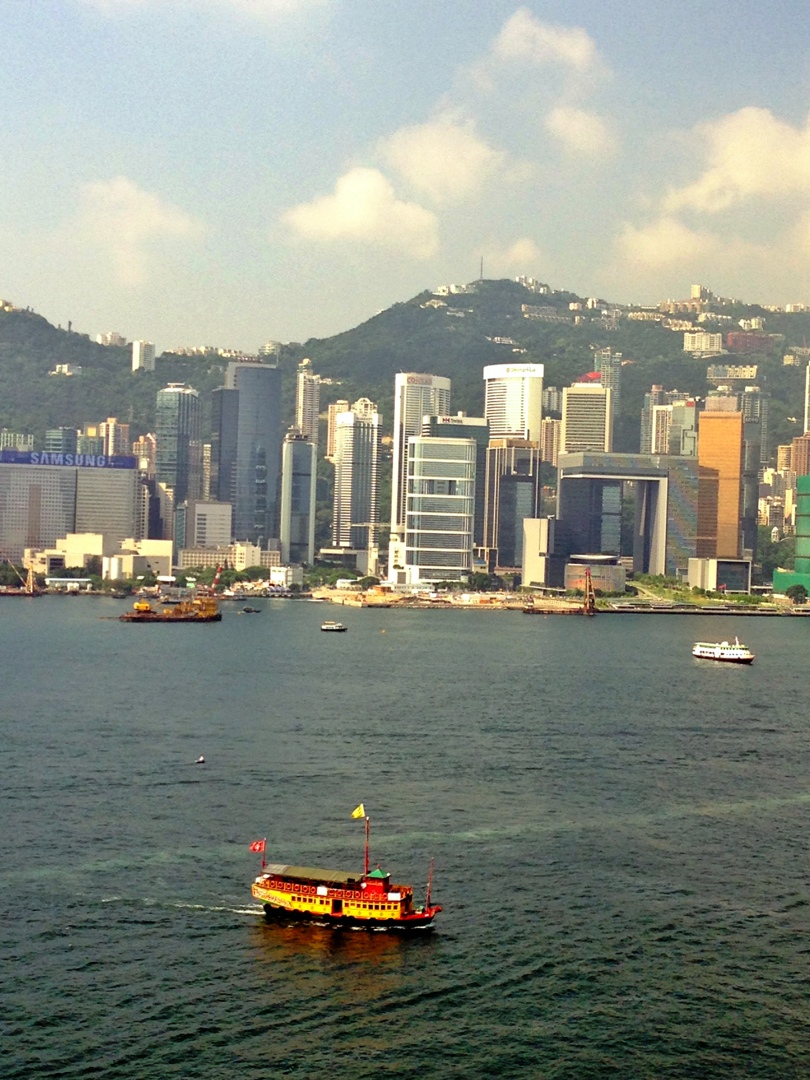 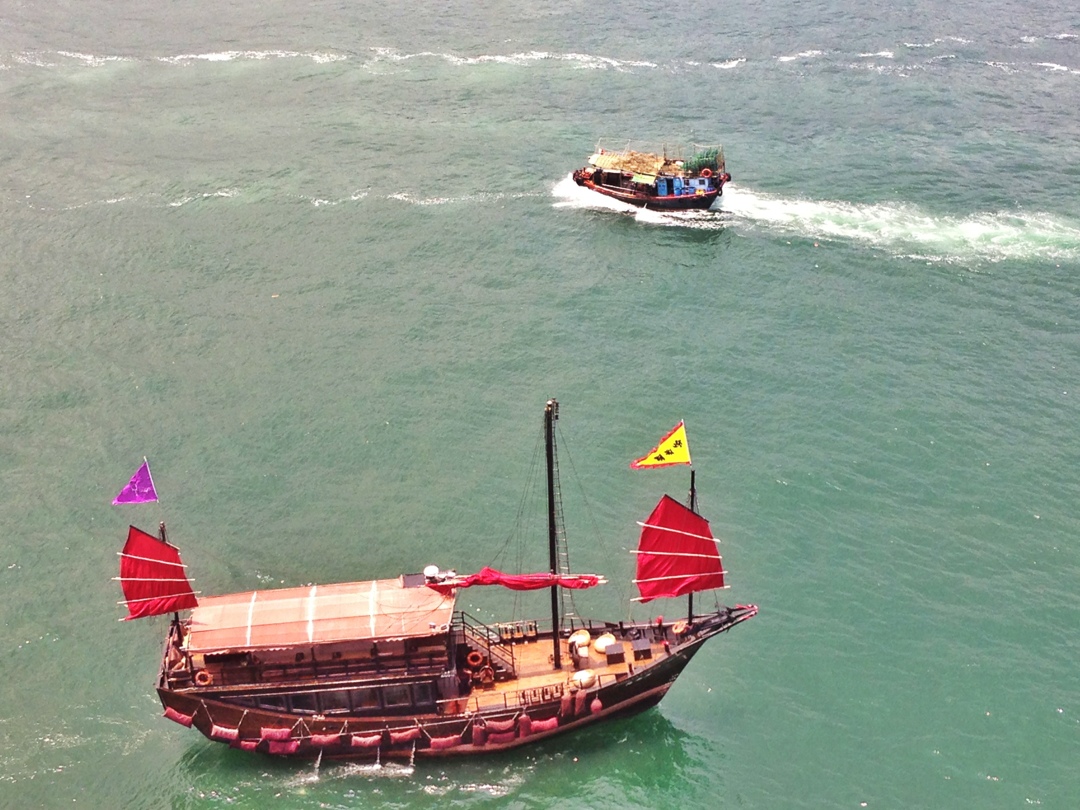 Somewhere along the way, we managed to lose a front tooth.  By the way, the exchange rate for a tooth in Hong Kong is about HK$10. 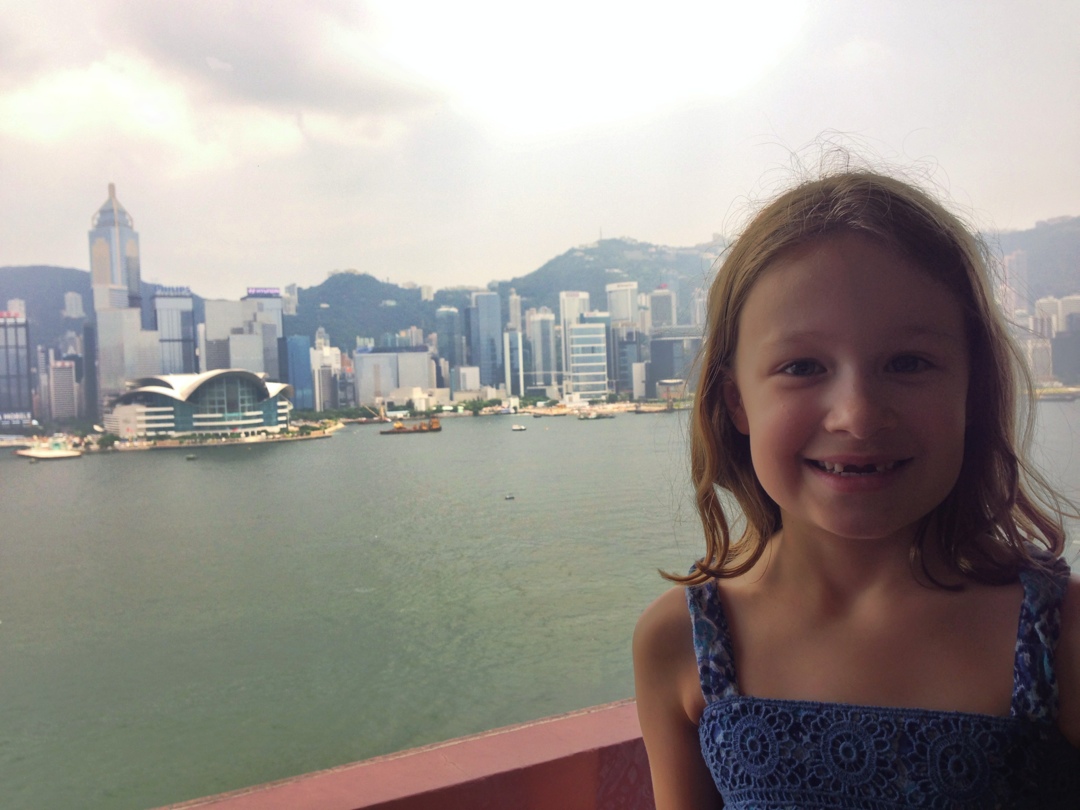 At 2PM, we checked-out, hopped in a cab (with every intention of taking the MTR subway but didn’t) and enjoyed the cab’s A/C all the way to the island where we pulled into the JW Marriott for the next two days of sightseeing (and more chillaxing).

The view from the 24th floor (note the reddish Intercontinental between the mirrored building and the radio tower): 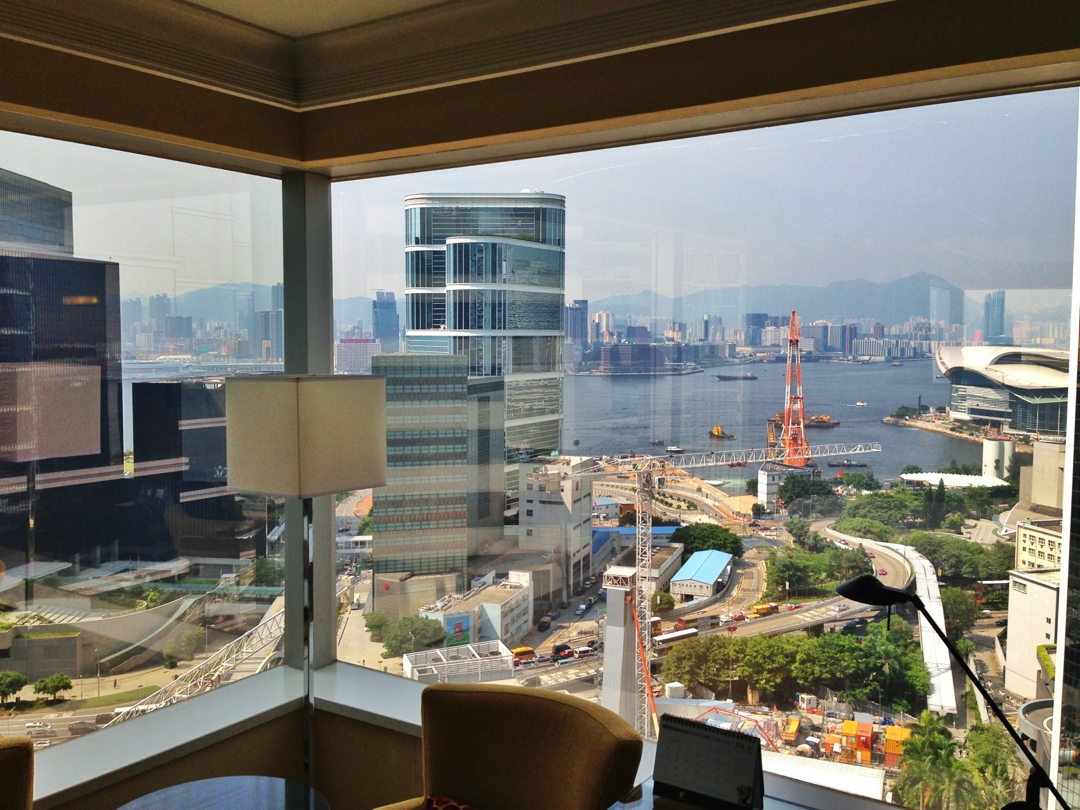 That afternoon, with the mercury in the mid-90s, we opted to hang low and enjoy the pool, the mall (I blew my NiMH battery charger in China–not rated to take 240V–so I found another one), and the view from the island of the Kowloon side.  The pool is surrounded by the Shangri-La and Conrad hotels.

Not to miss it again, we took the subway to the Central stop for some dinner, and onto the Star Ferry (past a massive ~20,000 square foot, 2-story, overpass Apple store) to catch the light show from the Kowloon side. 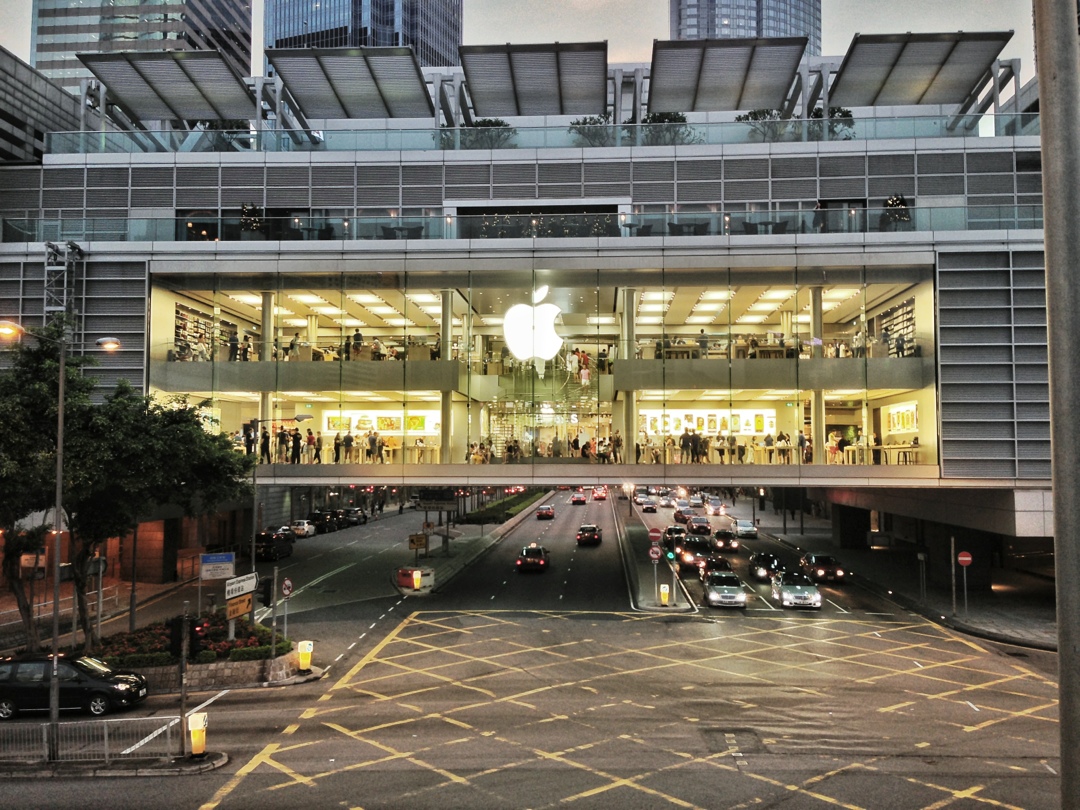 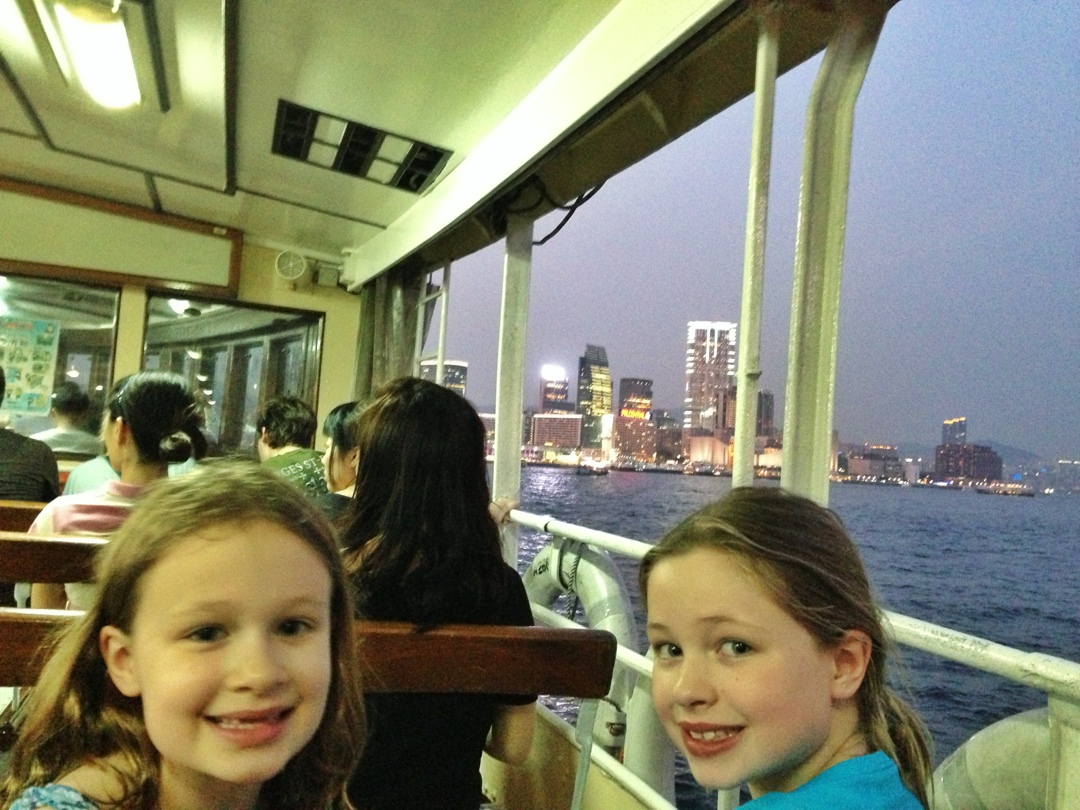 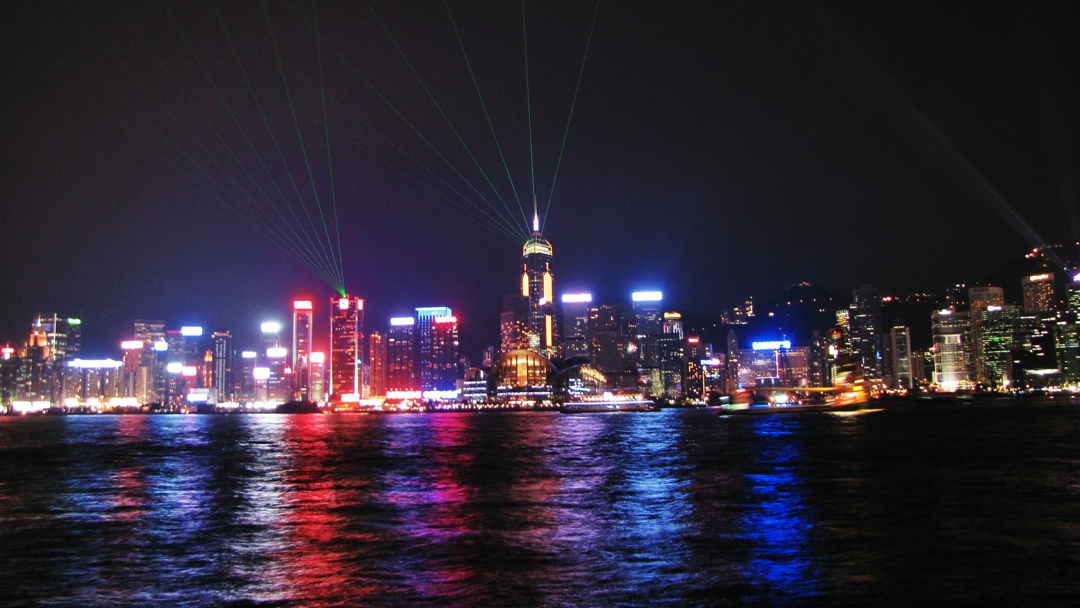 We caught the MTR (subway) back to Admiralty and popped up to our hotel, hit the pool, and hit the hay. 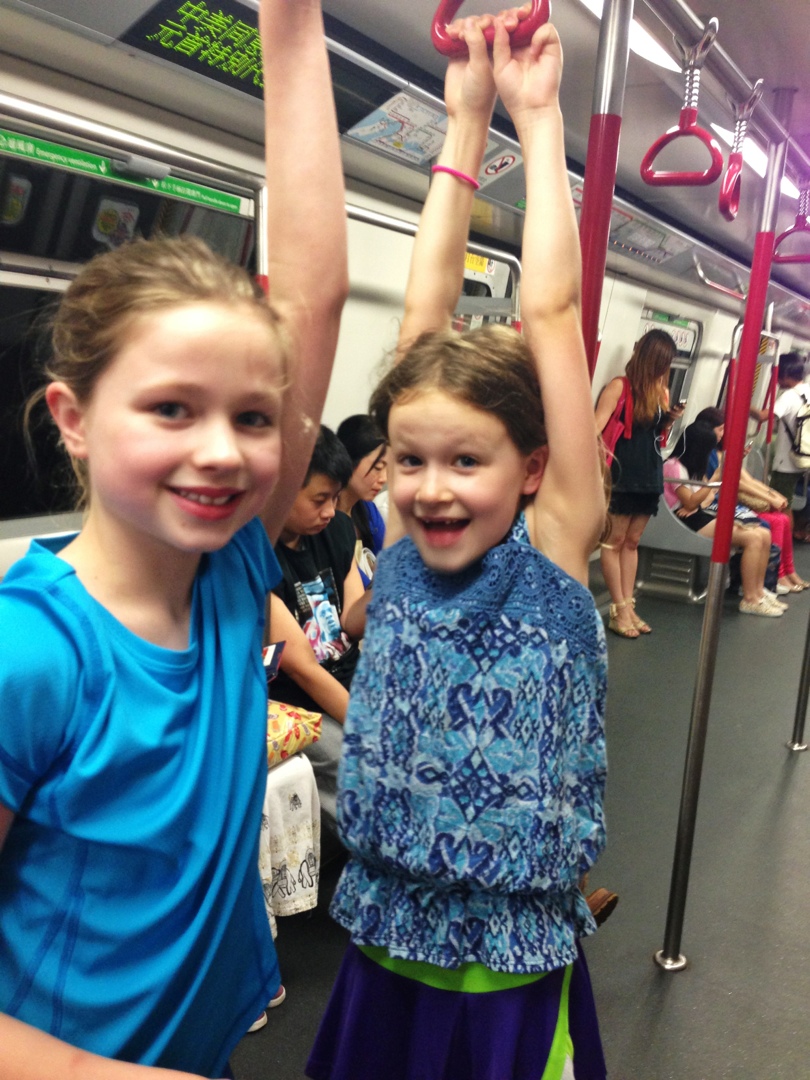 Day 2 in Hong Kong started slow again, and the temperatures started to rise — mid-90s again — but we were determined to get out and see a few things.

One of the most interesting things in Hong Kong are the wet markets.  These are traditional open air outdoor markets where locals buy meat, fish, fruits and vegetables. There are a few of them around the city that we identified: Bowrington Road (Causeway Bay), Stanley Street (Central) , and Spring Garden Lane (Wan Chai).  Based on a recommendation by one of the hotel staff, we went to see the market at Spring Garden.  We also took this opportunity to ride the Hong Kong Tramway double-decker trolley cars, which, by the way, are not air conditioned and may stop and start suddenly (only one child fell down the stairs backwards–but only part way– oops). 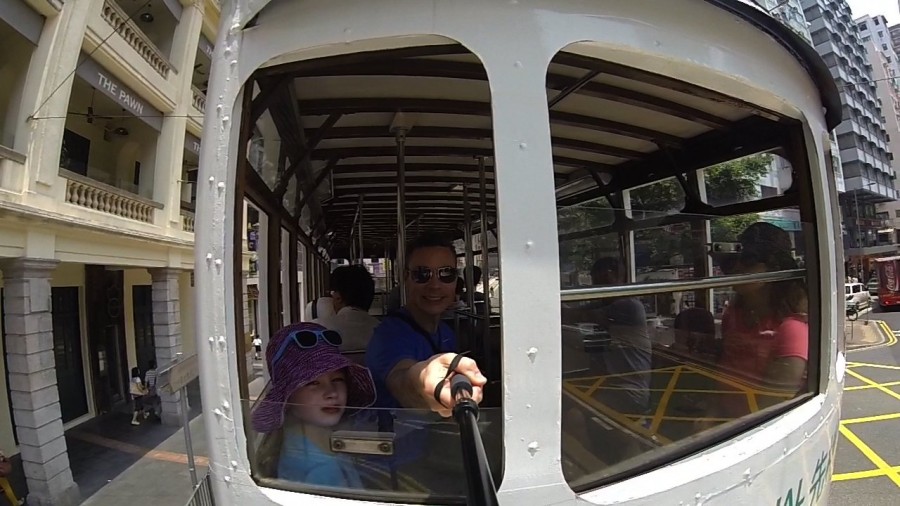 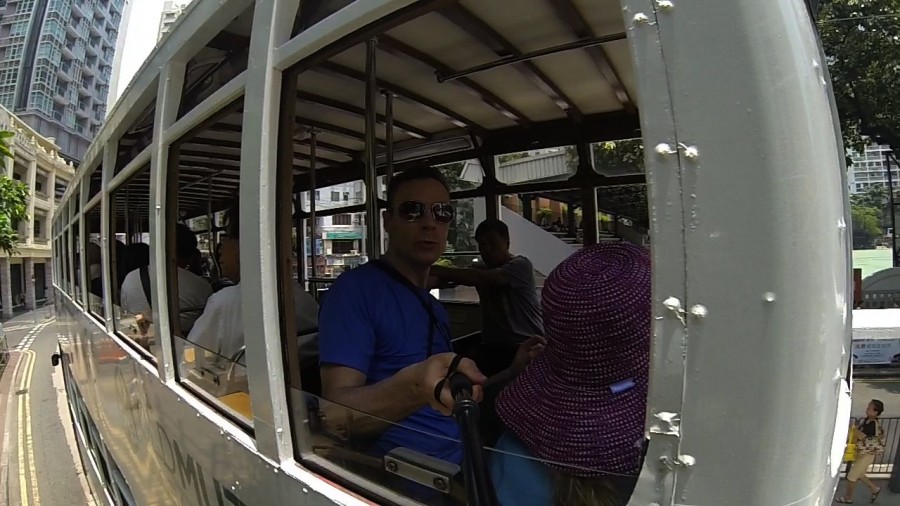 The wet markets are really eye-opening.  Fish and other sea creatures (water bugs, frogs, snakes) flopping around in buckets, half-filleted fish with beating hearts and heavy air sacks to show the freshness of the fish, and meat hanging without refrigeration are just some of the things we saw. 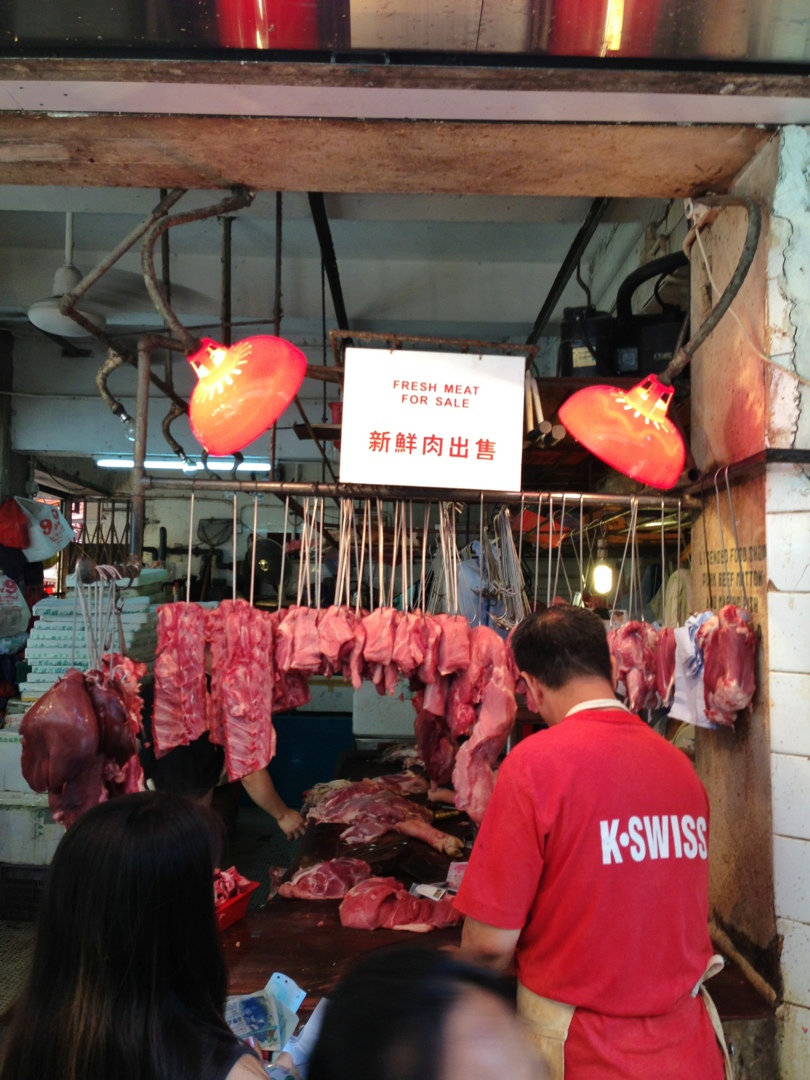 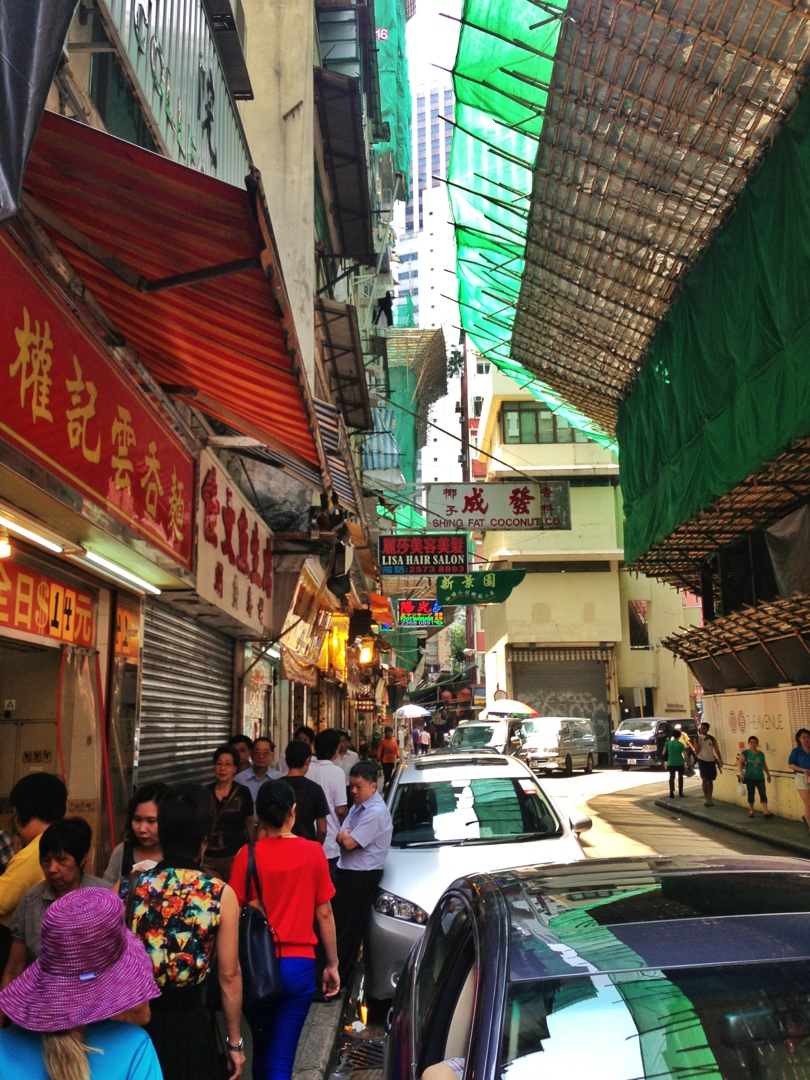 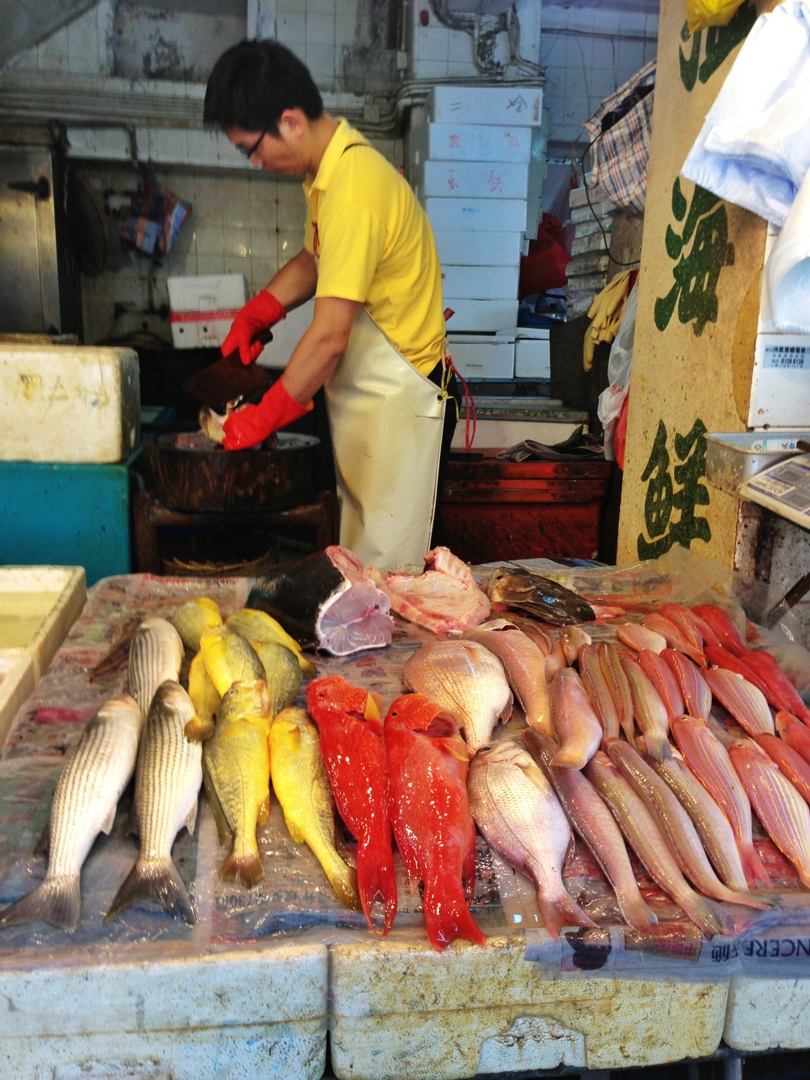 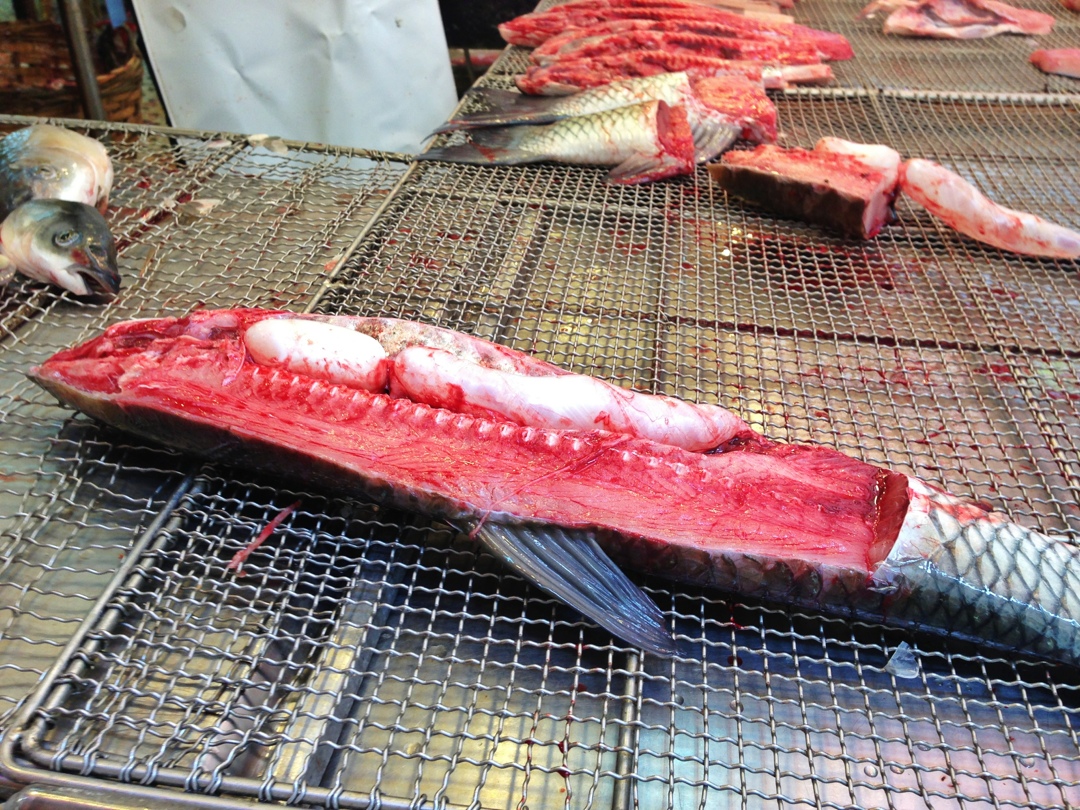 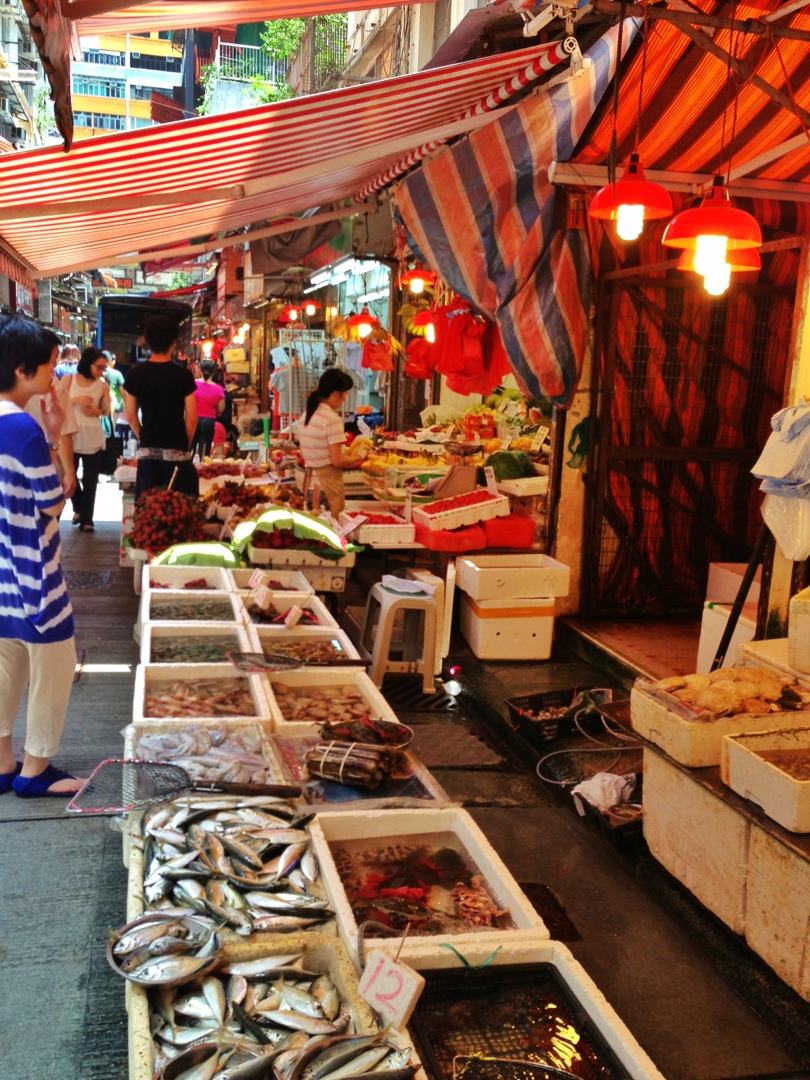 Following adventures in the old food trades, we hopped the trolley and headed to the Victoria Peak Tram.  The Peak Tram was built in 1888 to service British colonial military staff and high ranking Hong Kong officials (the governor) who lived on the hill under the peak.

Dripping with sweat, we marched from the trolley to the Tram station and waiting in line (and perspired some more).  With trams operating every 10-15 minutes and an up and a down tram (a funicular system), this operation does not scale well.  After 30 minutes of waiting, we finally hopped on board and began the climb up the 1.4km track with a 400m elevation change. 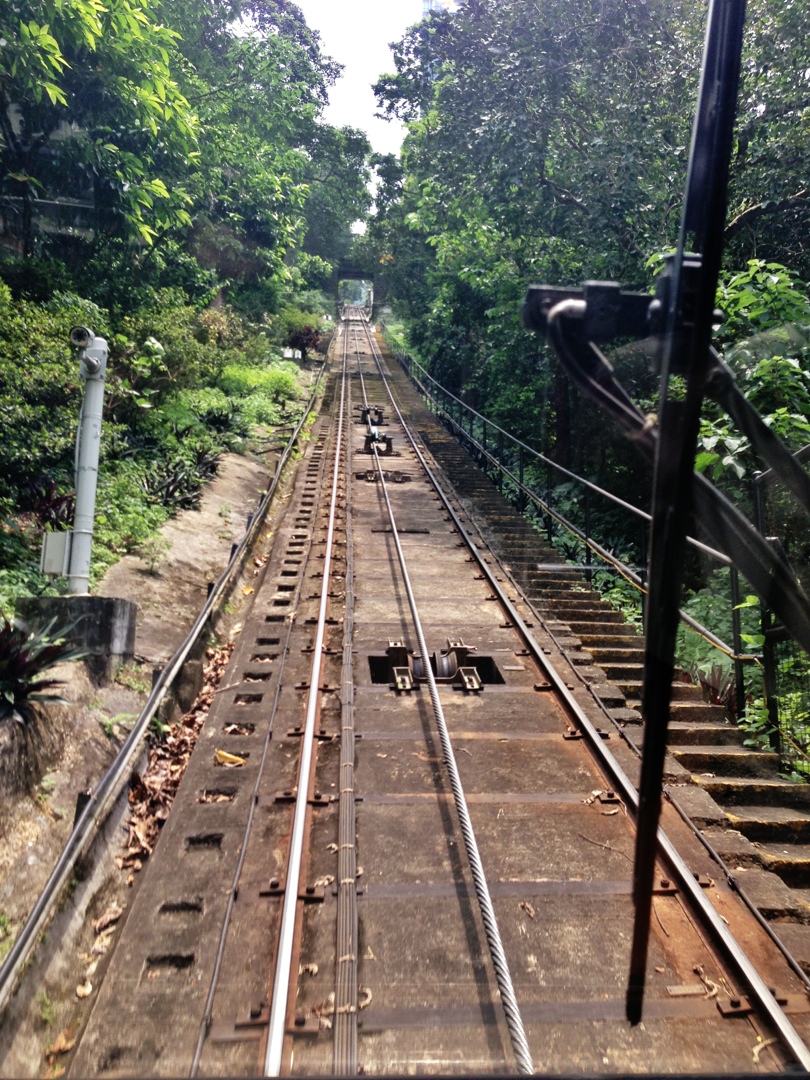 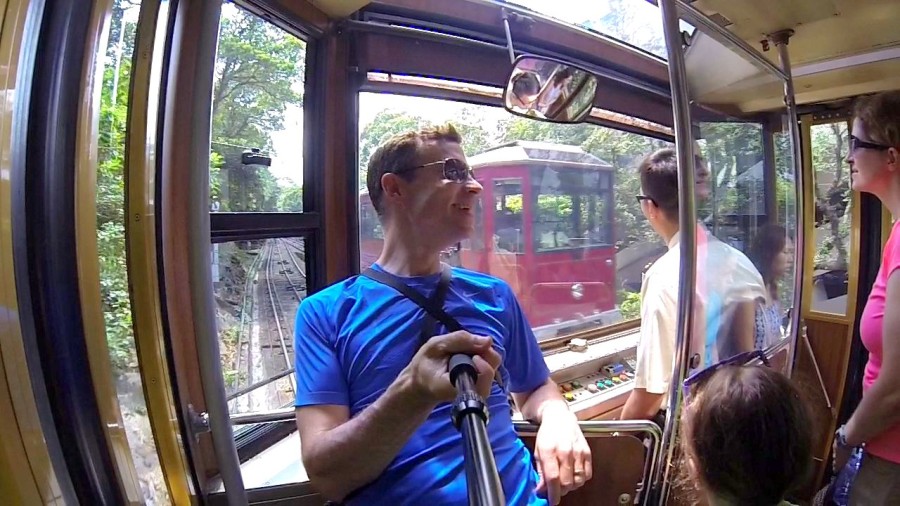 We spent some time up top before heading back down.  The top provides a panoramic view above Hong Kong. 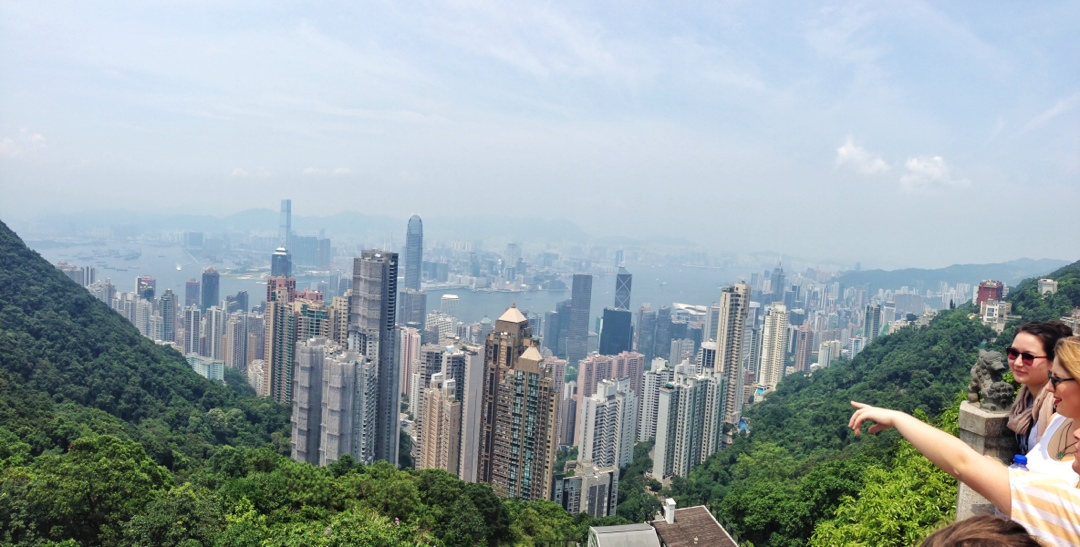 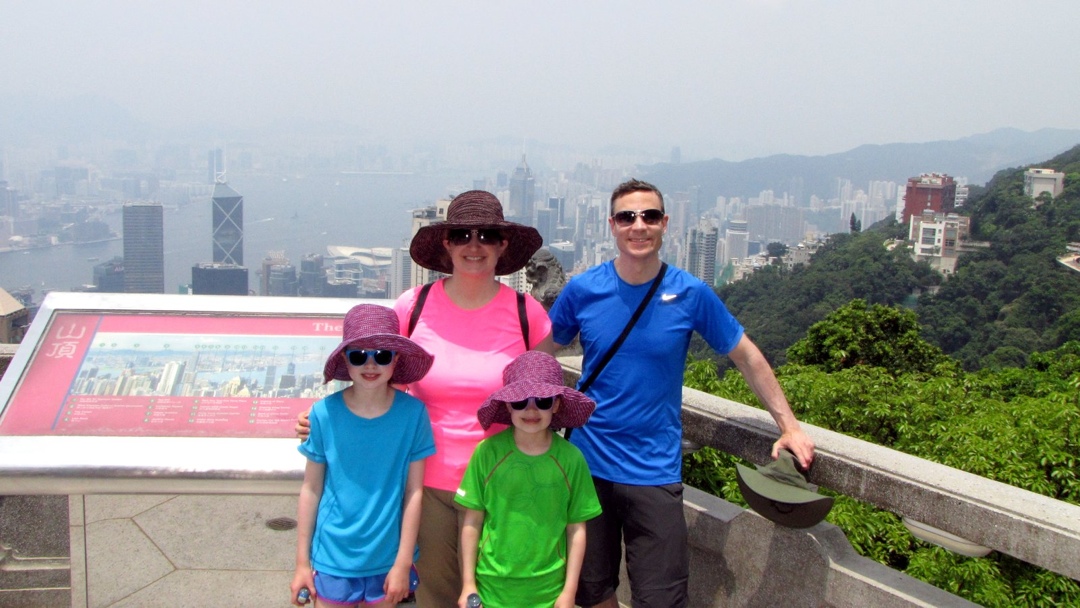 The ride down was uneventful.  Both up and down, we rode at the top end of the car standing up.  At some points you just lean back due to the steep angle. 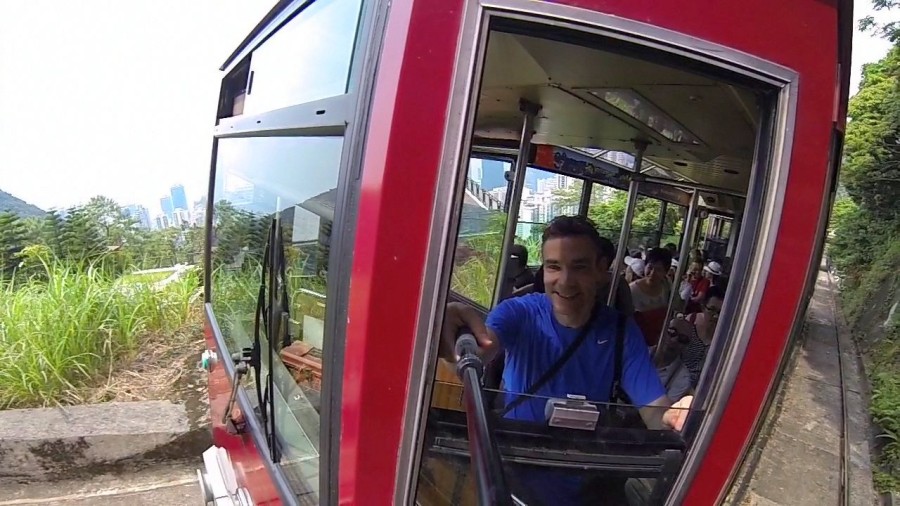 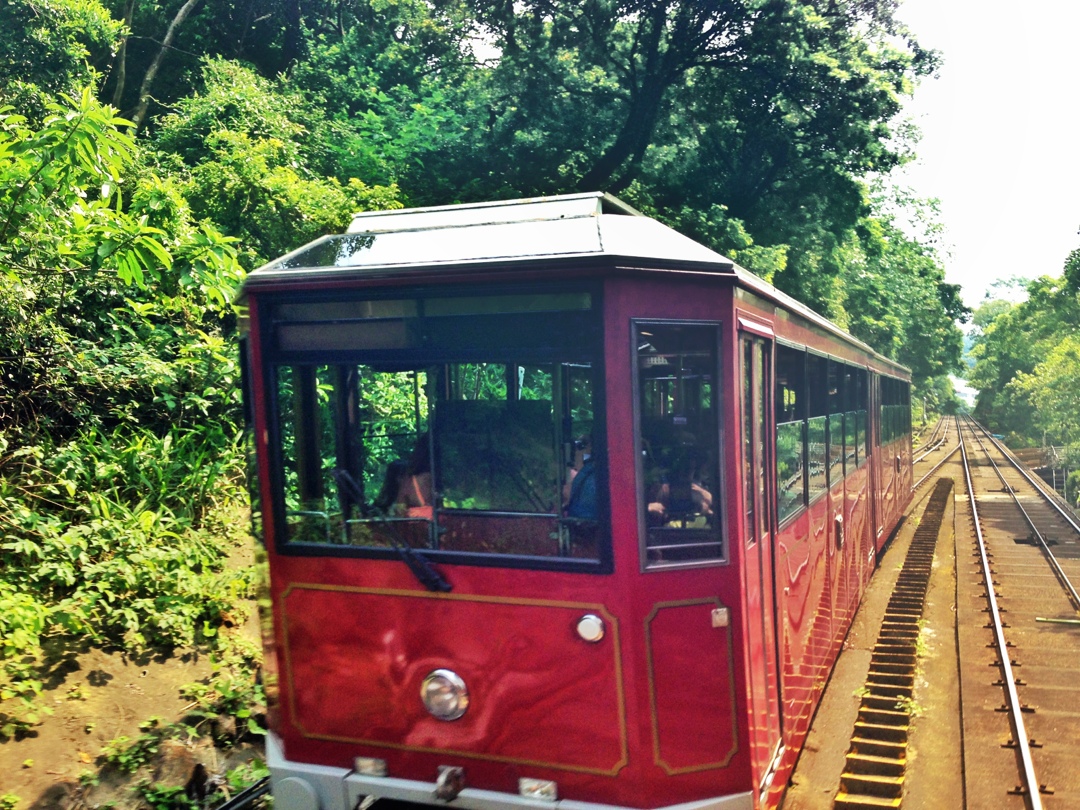 Hot and, well, not tired, just hot, we grabbed a taxi back to the hotel to unwind.   The girls had their sights set on a nice cool movie at the theater.   Hong Kong (maybe all of China?) does movies a little differently.  Seats are assigned (no general admission).  These theaters were really small, too, so by the time we got there 30 minutes before the movie we wanted to see, it was sold out.  The next movie had 2 seats in the front row, and the 9PM movie had 4 seats in the front row.  So we wandered the mall before heading back to the room to read and write.

We did dinner at the hotel poolside (Fish Bar) before jumping in the pool. 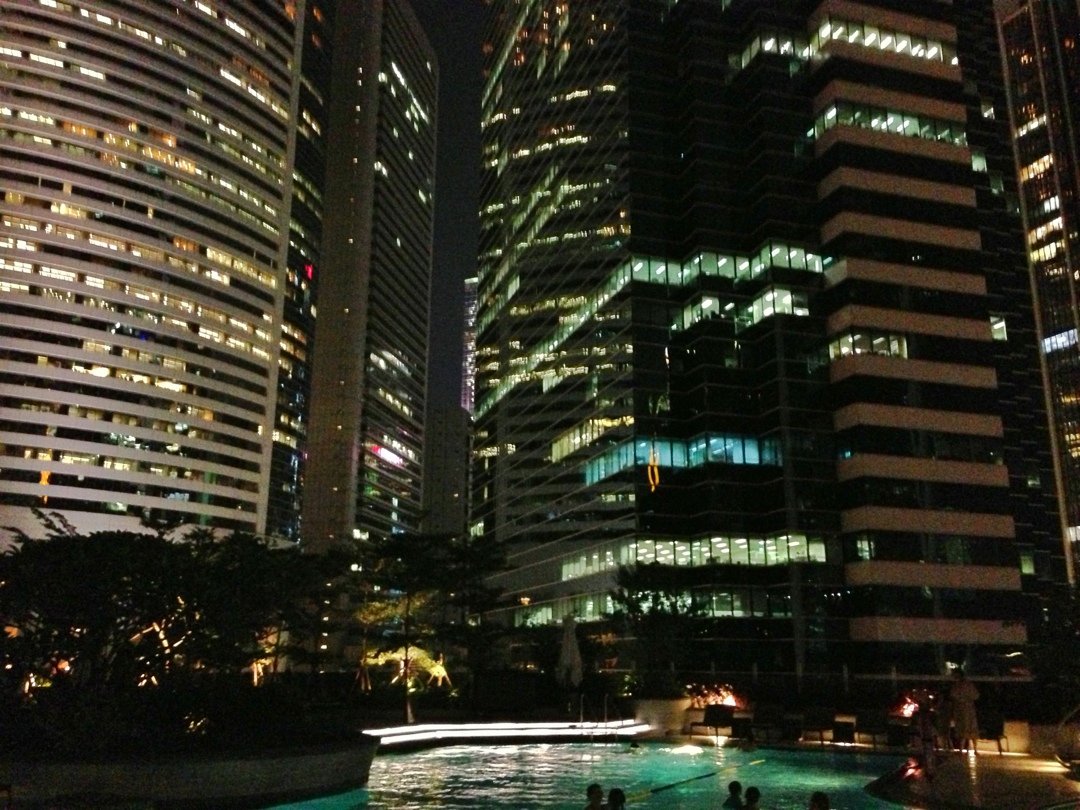 We headed out the next morning to the airport via the Airport Express train and headed off to the Maldives via Singapore for a short layover.