Today we woke up to rain and a little wind. We were picked up at 7:30AM for an 8AM tour to explore a dormant volcano!

The Thrihnukagigur volcano last erupted 4,000 years ago. It was discovered by a local caver in 1974 who is the same guy who started taking people down into the volcano only a few years ago. Inside the Volcano is now a 2-3 times daily tour during the summer months.

Because of the rain, we suited up in bright day-glo yellow rain slickers.  It was not guarantee that we’d stay dry, but it would help. We had to do some creative buttoning to cover up the girls. 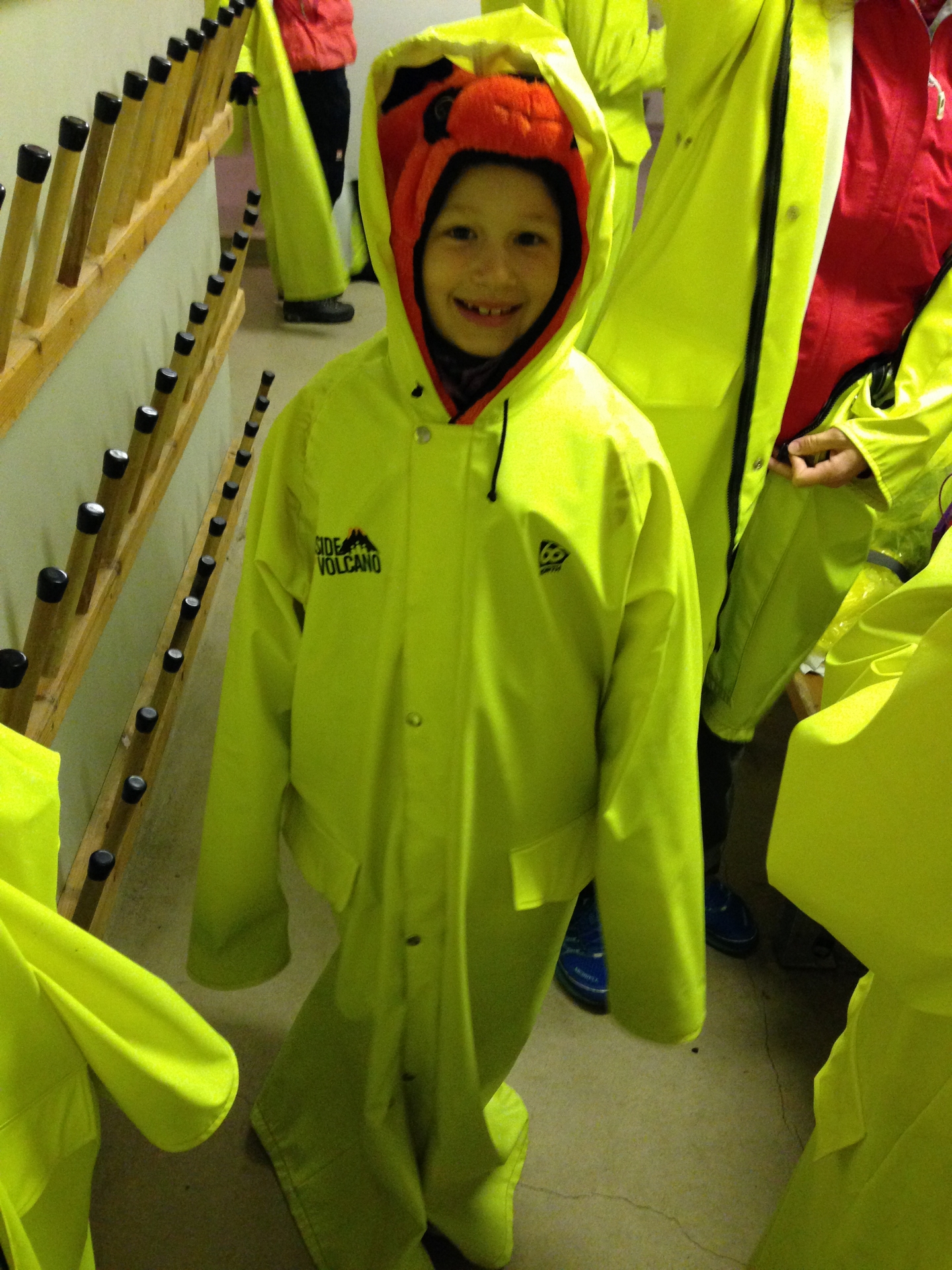 The website describes a moderate 50-minute hike over lava fields.  On a nice day, the hike would be pleasant.  Today, however, almost 2 miles in horizontal blowing rain was not quite what we had signed up for.  The good news was that the wind and rain was at our backs, so we got a slight wind assist.   The bad news was that we were going to have to come back the same way!

We started the hike in a single file line against a post-apocalyptic-meets-martian-movie-set backdrop. 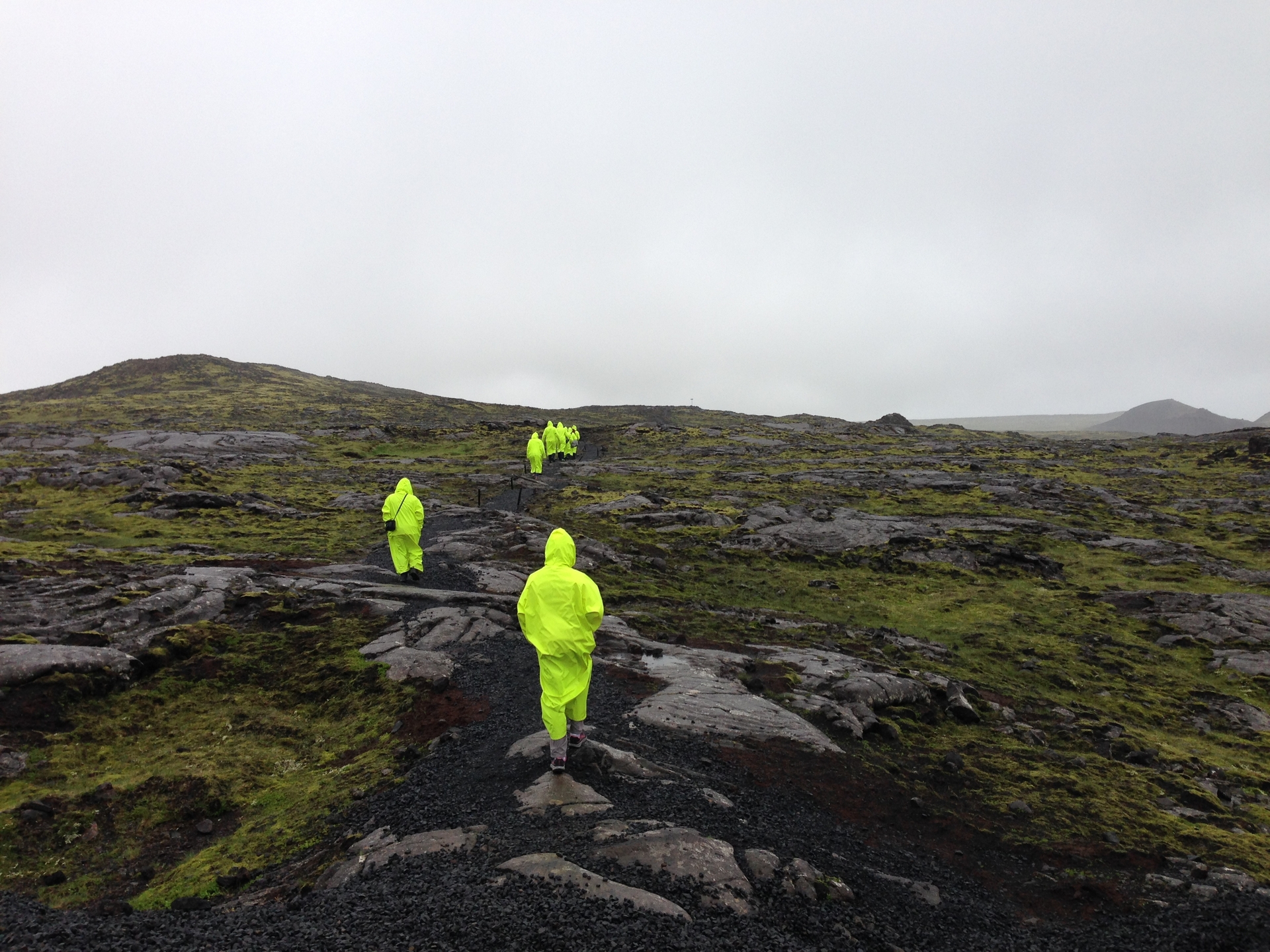 In all directions, there was nothing but ancient lava and an occasional cinder cone. 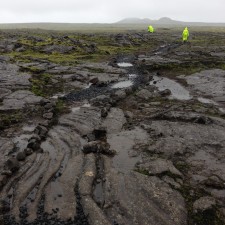 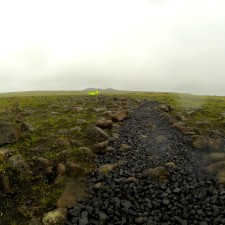 About half way into our hike, we crossed over a short cable bridge that spanned a small ravine. This was an exposed section of the mid-Atlantic ridge (you may recall we toured through Thingvellir a couple days ago), so we crossed from the Eurasian plate to the North American tectonic plate. 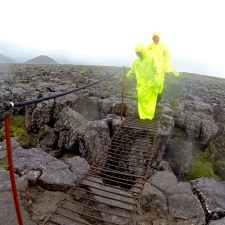 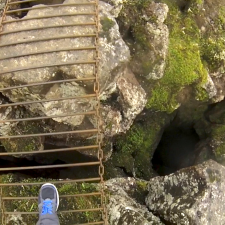 Warming Hut!
At the end of the hike, there was a much-needed warming hut where we got to take a little break from the elements outside. We removed our slickers, warmed up, dried off, and enjoyed hot coffee and tea (and soup later upon our return). 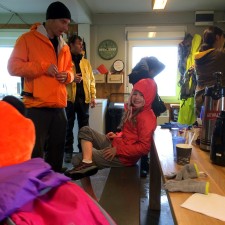 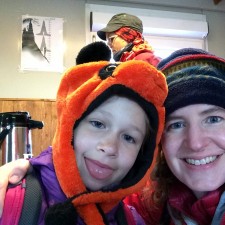 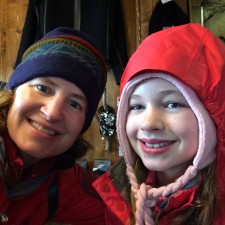 This hut, interestingly, is completely off the grid, and it is transported and placed and removed by helicopter every season (summer). Supplies are also mountain biked in (when the weather is better).
After a rest break, we divided into three smaller groups and donned the appropriate safety harnesses including these fancy helmets and headlights: 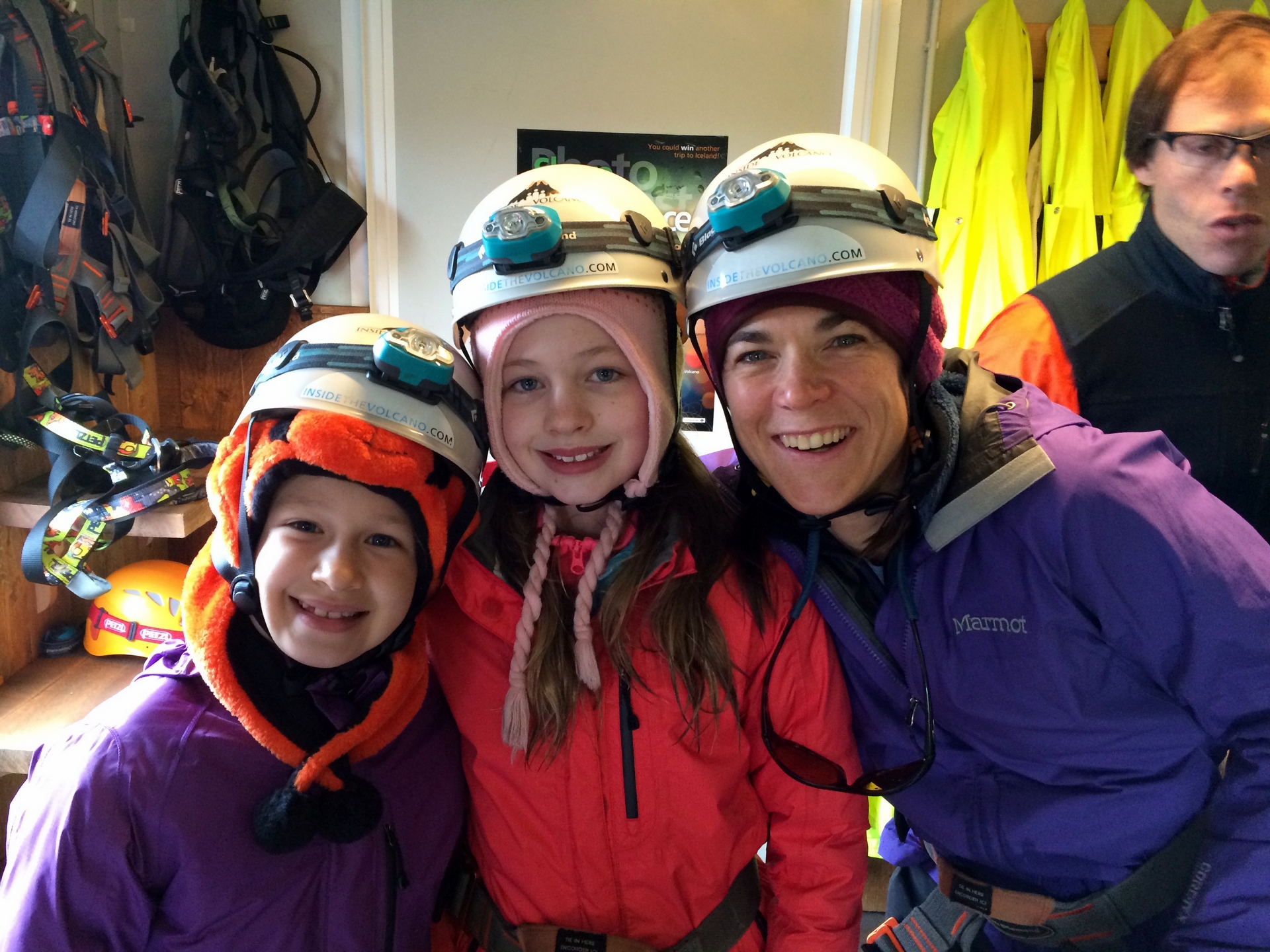 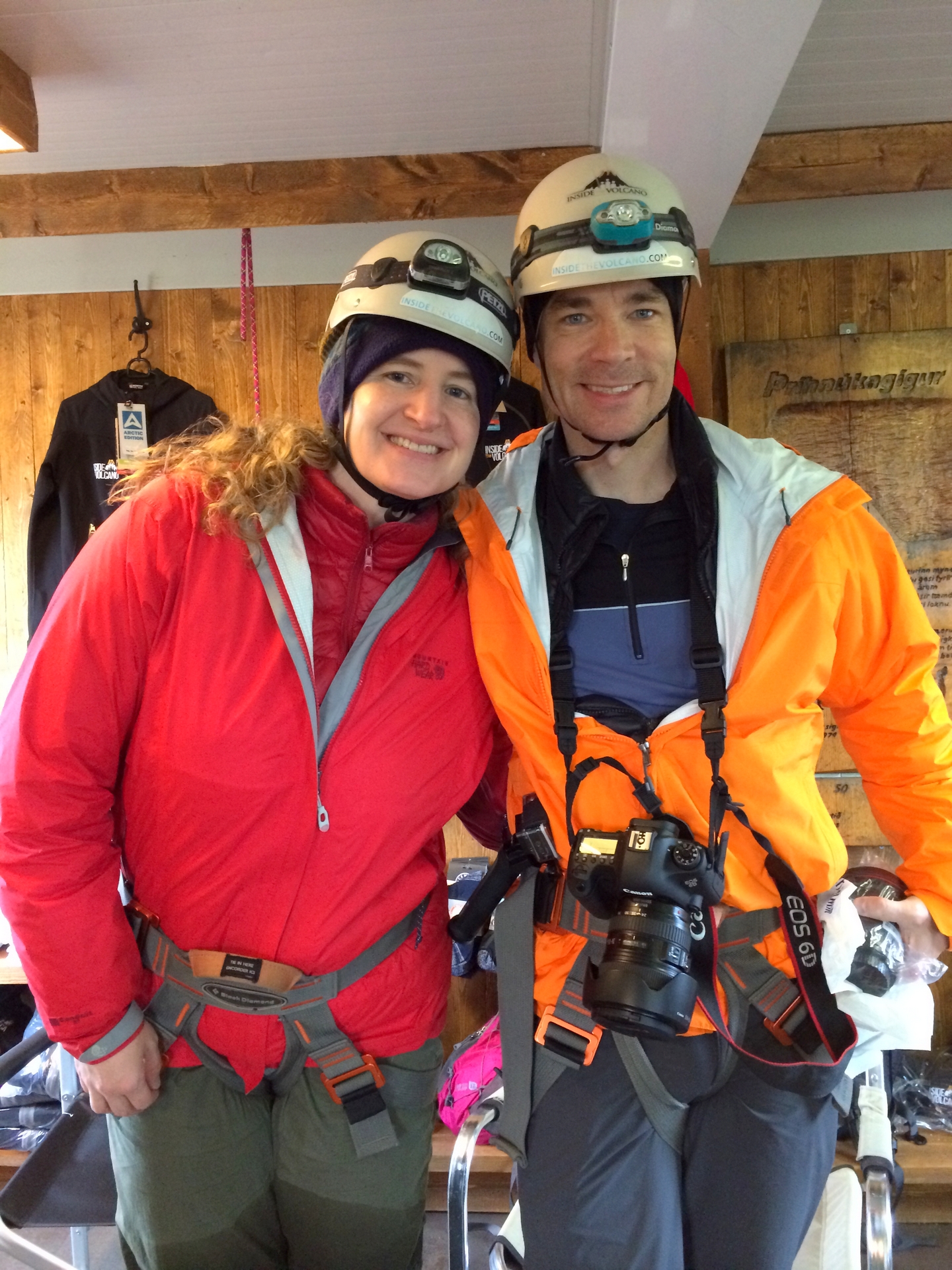 When it was our turn, we put back on our dayglo slickers and headed out into the driving wind and rain. 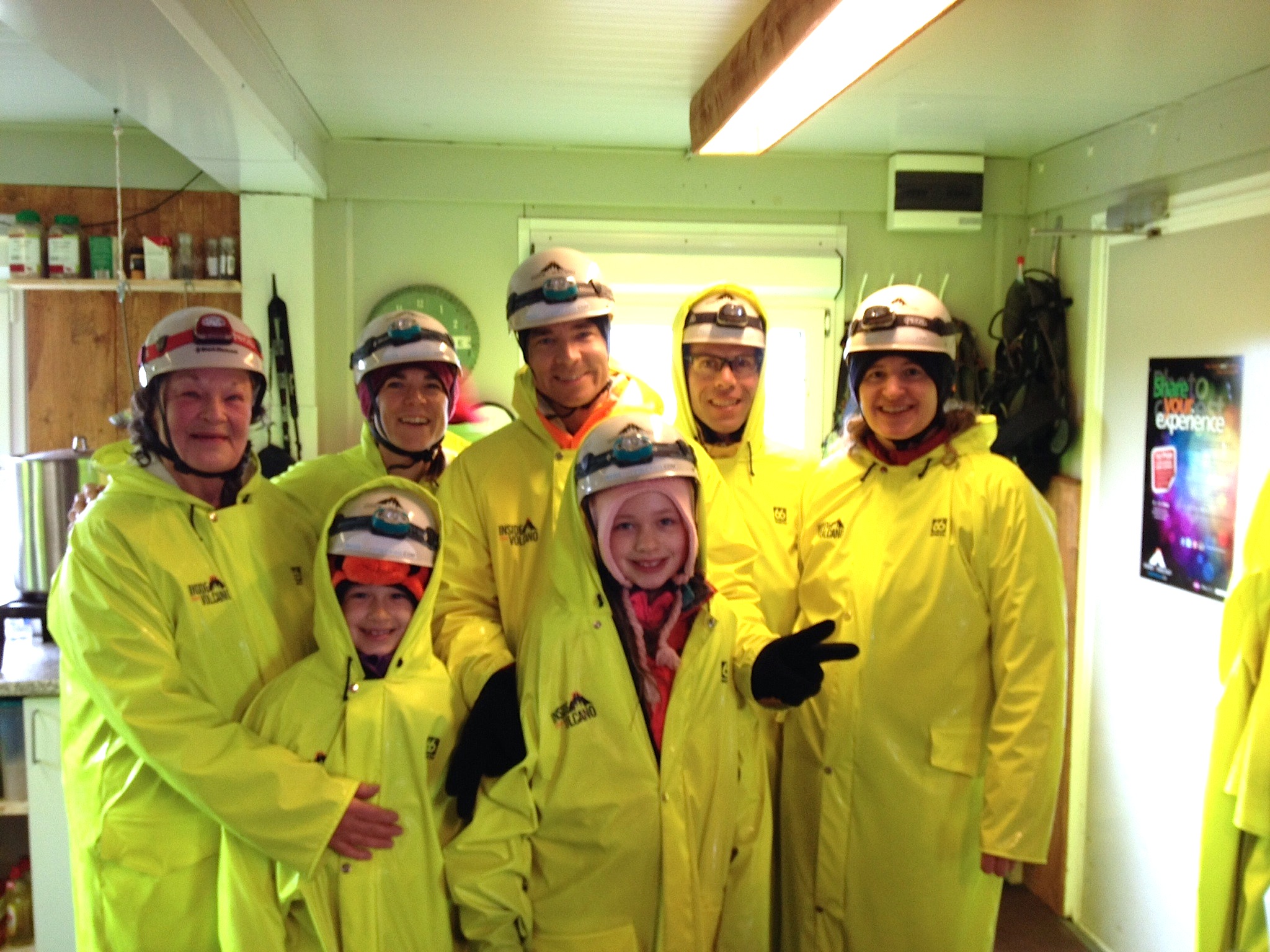 To the Mouth of the Volcano

Unfortunately, the wind gusts had increased slightly. Opening the door to the warming hut was a challenge in itself as the wind pressed it closed and the horizontal rain pelted us upon exiting.

From the hut, it is a 5 to 7 minute walk up to the entrance around the cinder cone and up a wire stair-ladder. You can see the hut over my shoulder in the first photo. They place and remove these ladders every season. Note the absence of handrails: 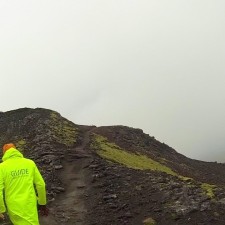 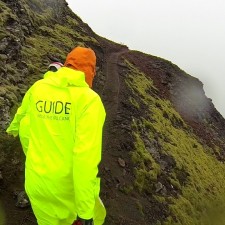 (Almost) Blown off the Volcano
The wind was still at our backs climbing up the hill, but we weren’t prepared for what came next. As we crested over the top, the wind was so strong that it swept our kids right off their feet swinging them around the front of us. Fortunately, we had been holding on tight. Here are a couple screenshots of the brief chaos that ensued (note my foot off the ground as we’re spun around by the wind): 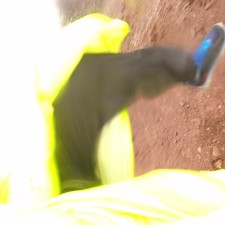 To relive this moment:

If you want to see more of the hike up the hill, you can see it here.

Immediately after the top, the wind completely died down, and it was calm for the last 25 feet of the trail to the mouth of the volcano.

The floor of the magma chamber is approximately 120 meters (390 feet) down from the entrance – taller than the Statue of Liberty (305 feet from ground to torch). Back in 1974, the climbers used ropes to explore the chamber. This is not a practical way to cycle tourists through, so they adapted an industrial window washing rig used in multistory buildings for the job. One by one, we crossed the metal bridge and boarded the lift: 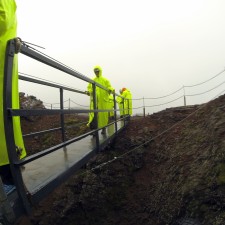 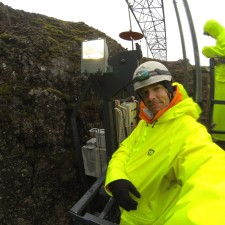 We squeezed all 7 of us plus the operator onto the lift and headed down into the chamber. The ride takes about 5 minutes, but we won’t bore you with the video – well maybe some stills: 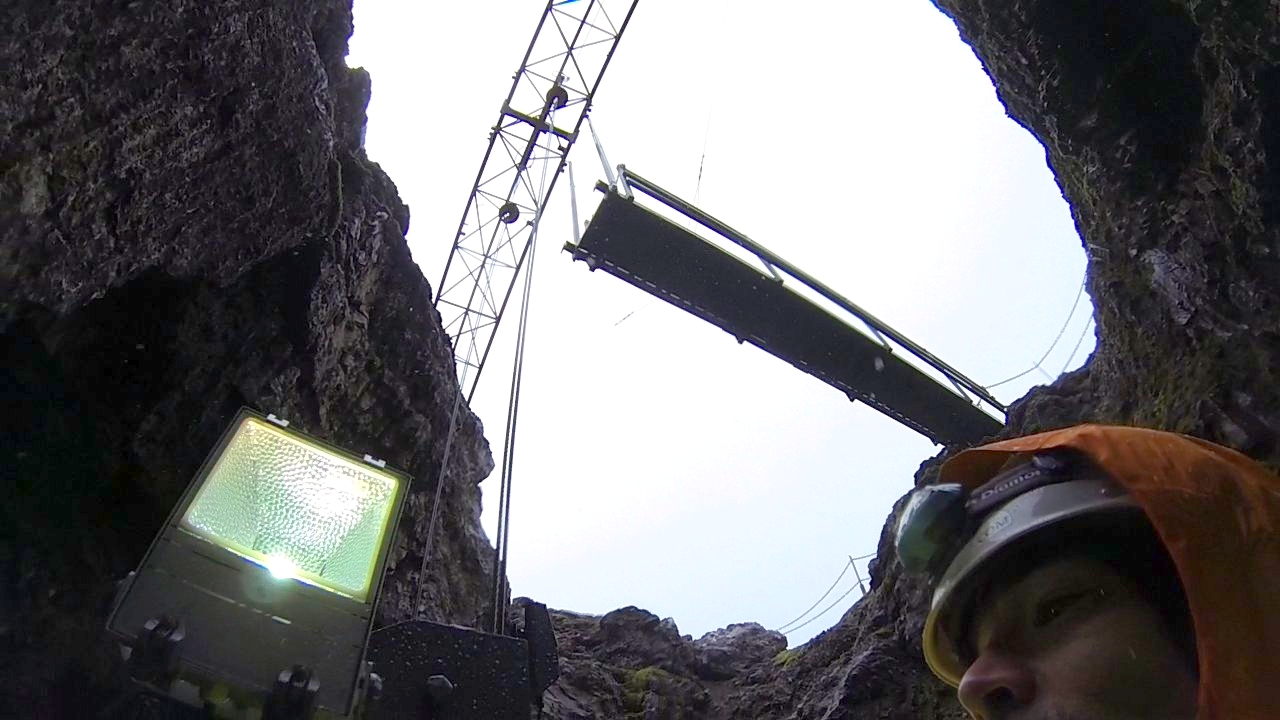 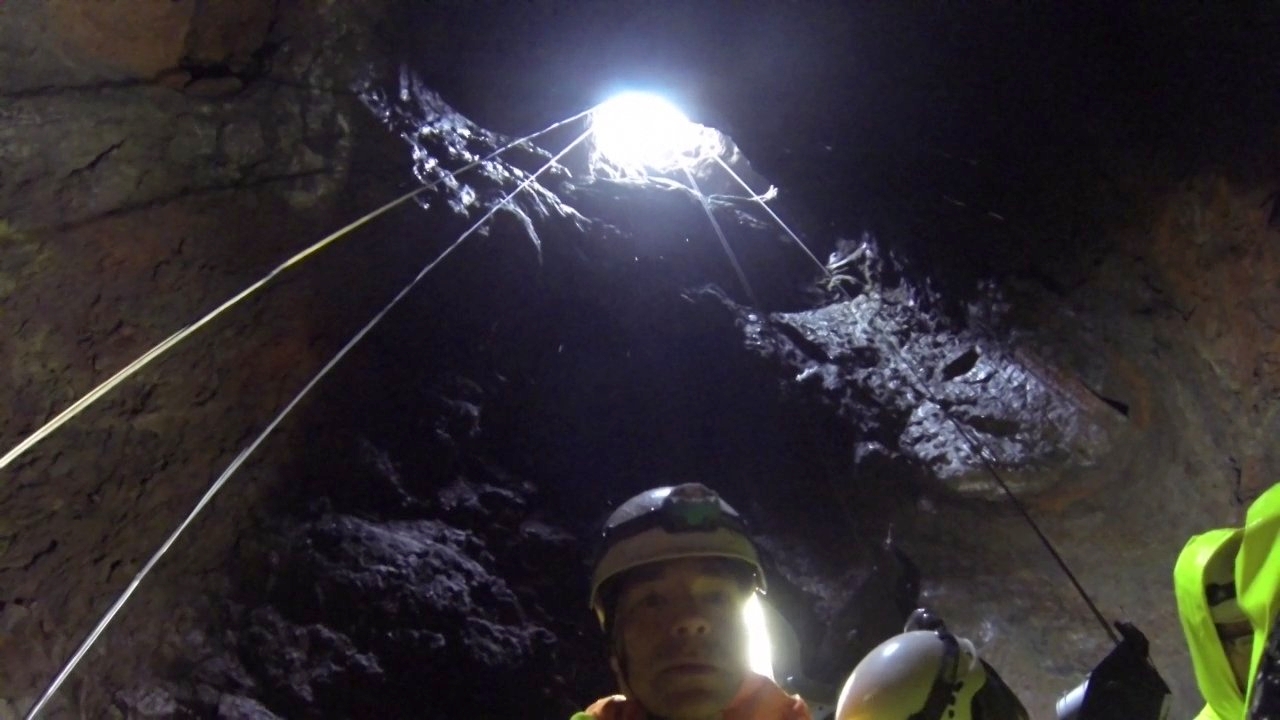 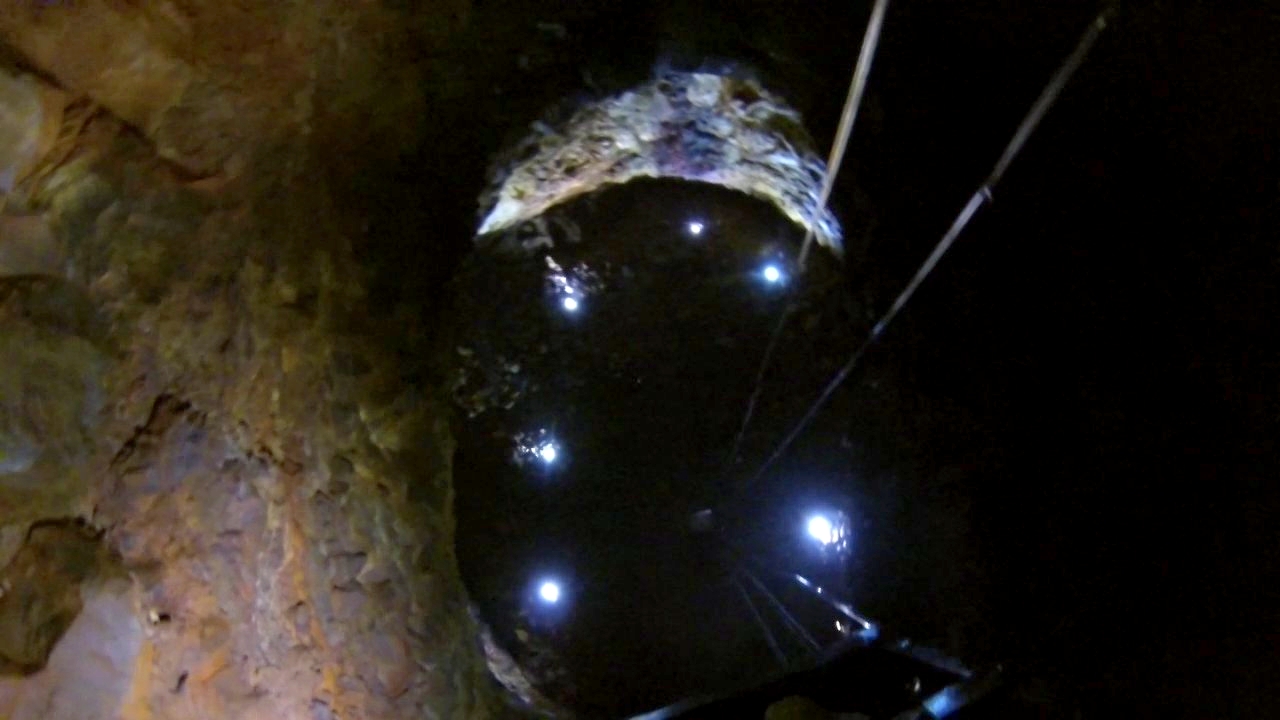 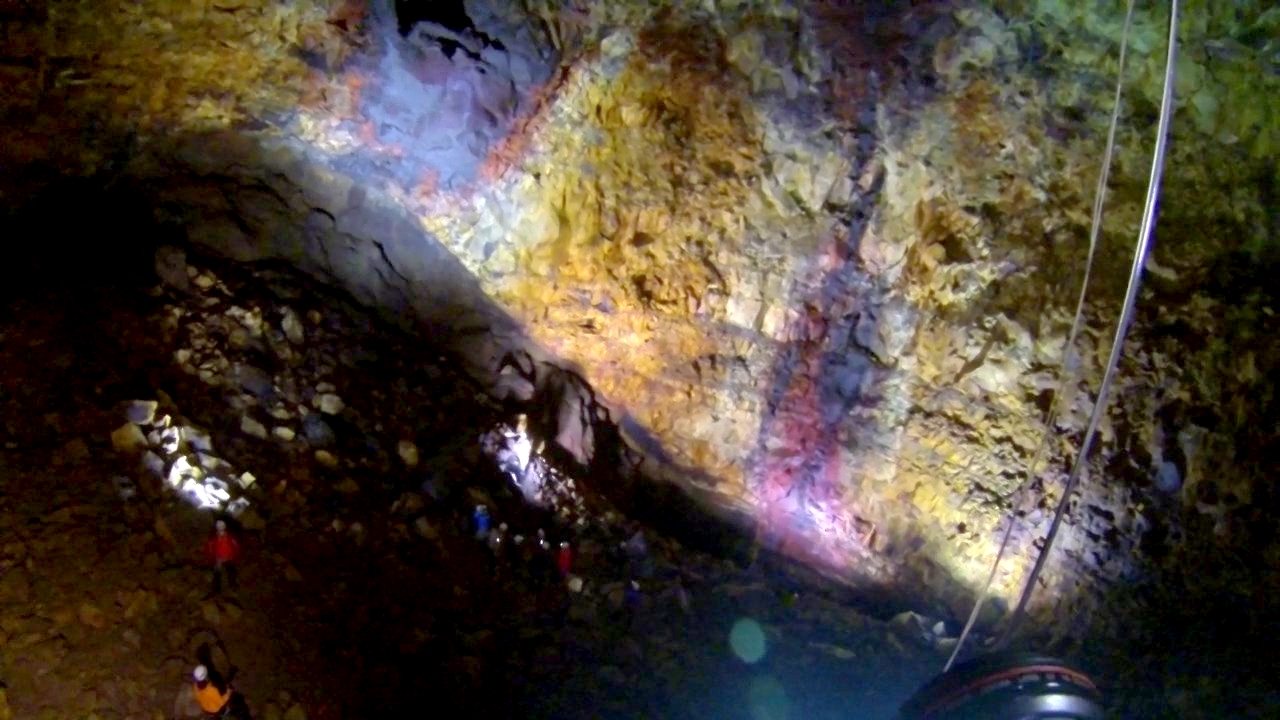 Once at the bottom, we were allowed to freely explore the chamber – but not before we took a few group shots and struck a few poses: 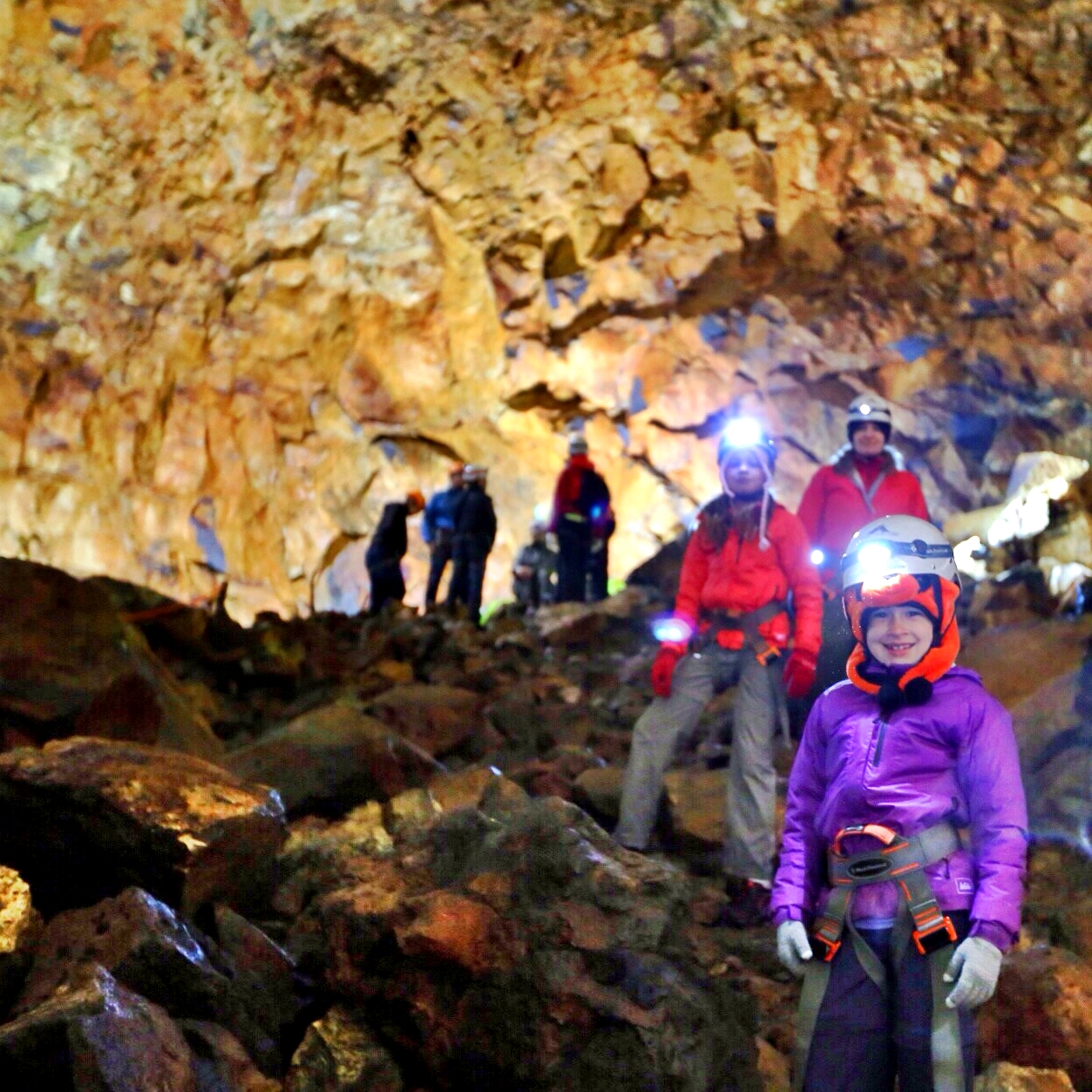 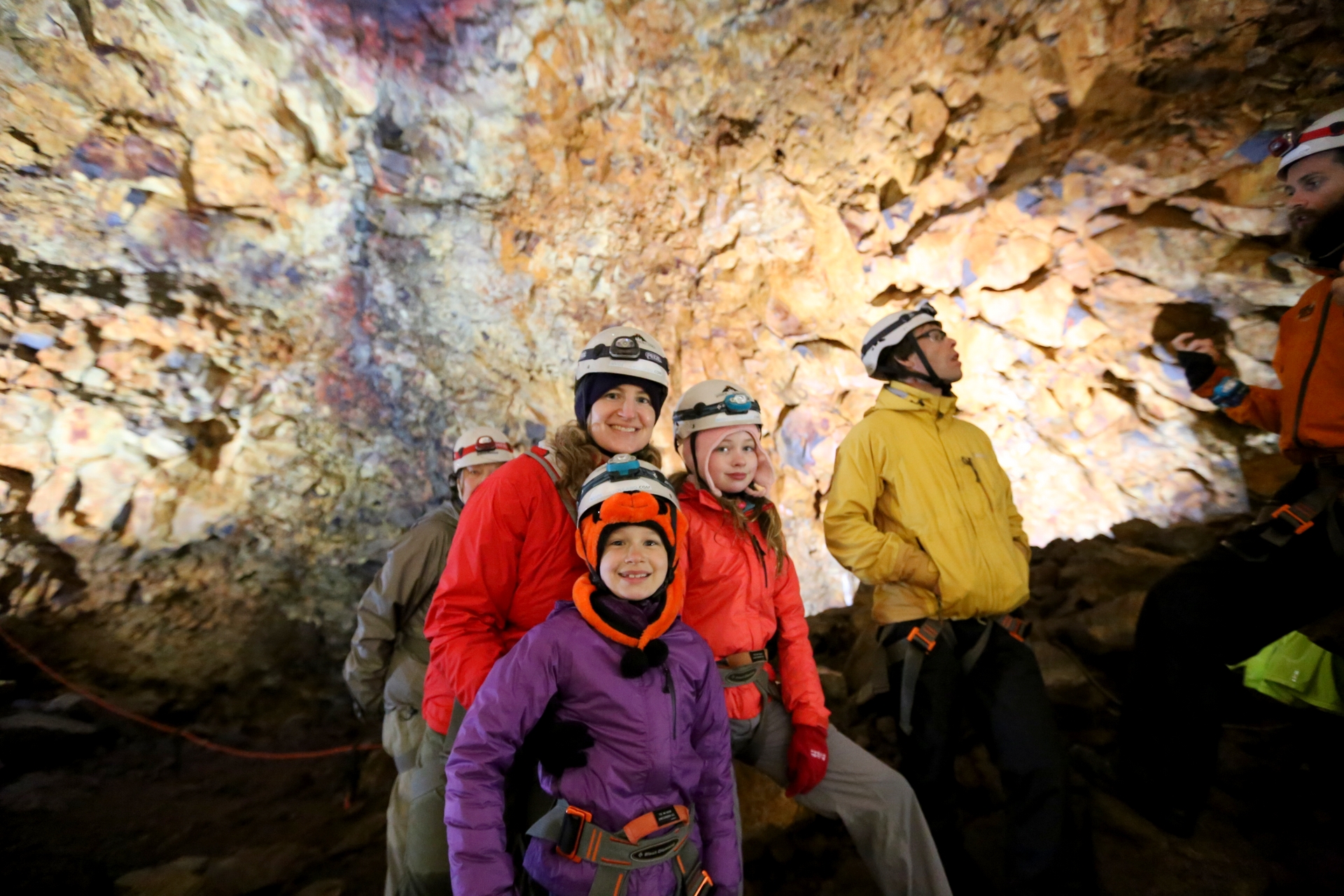 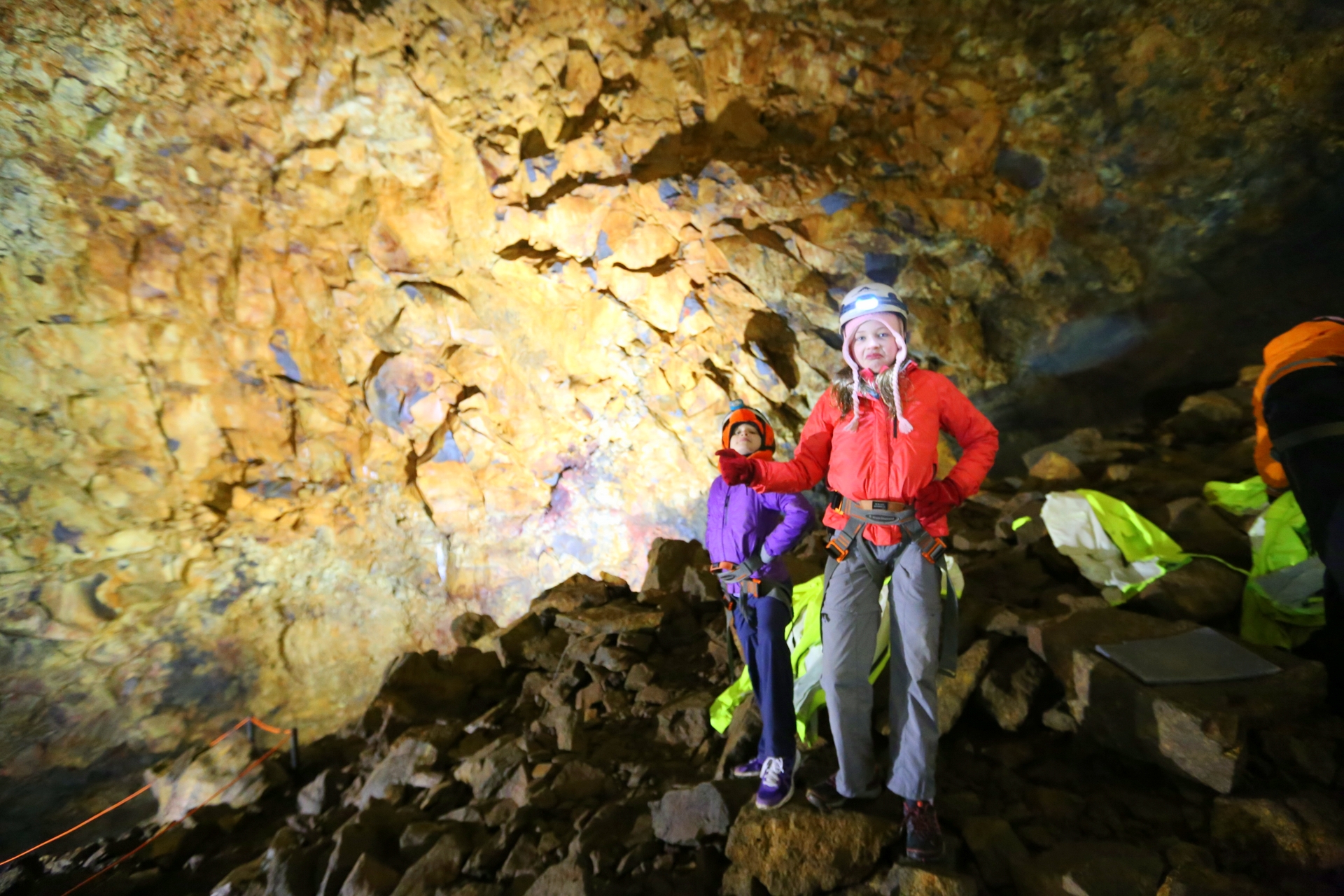 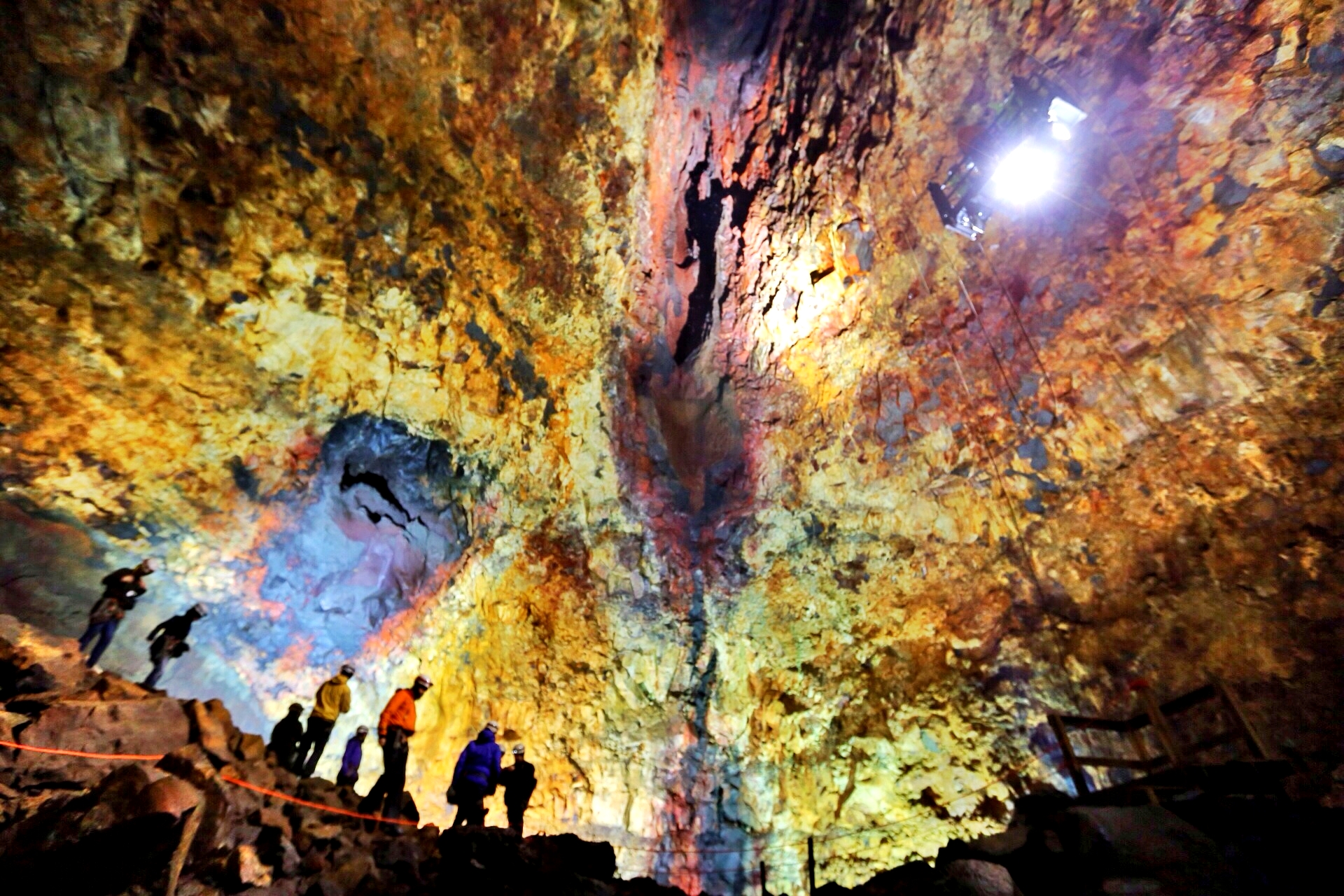 It’s a little surreal in the chamber and feels a bit like a red abyss. The lift with its lights looks like a submarine coming down to explore the colorful depths. You can see what almost looks like stalactites along the walls of the narrow chimney. This is, in fact, lava that more or less smeared and dripped back down the inside wall of the chamber. 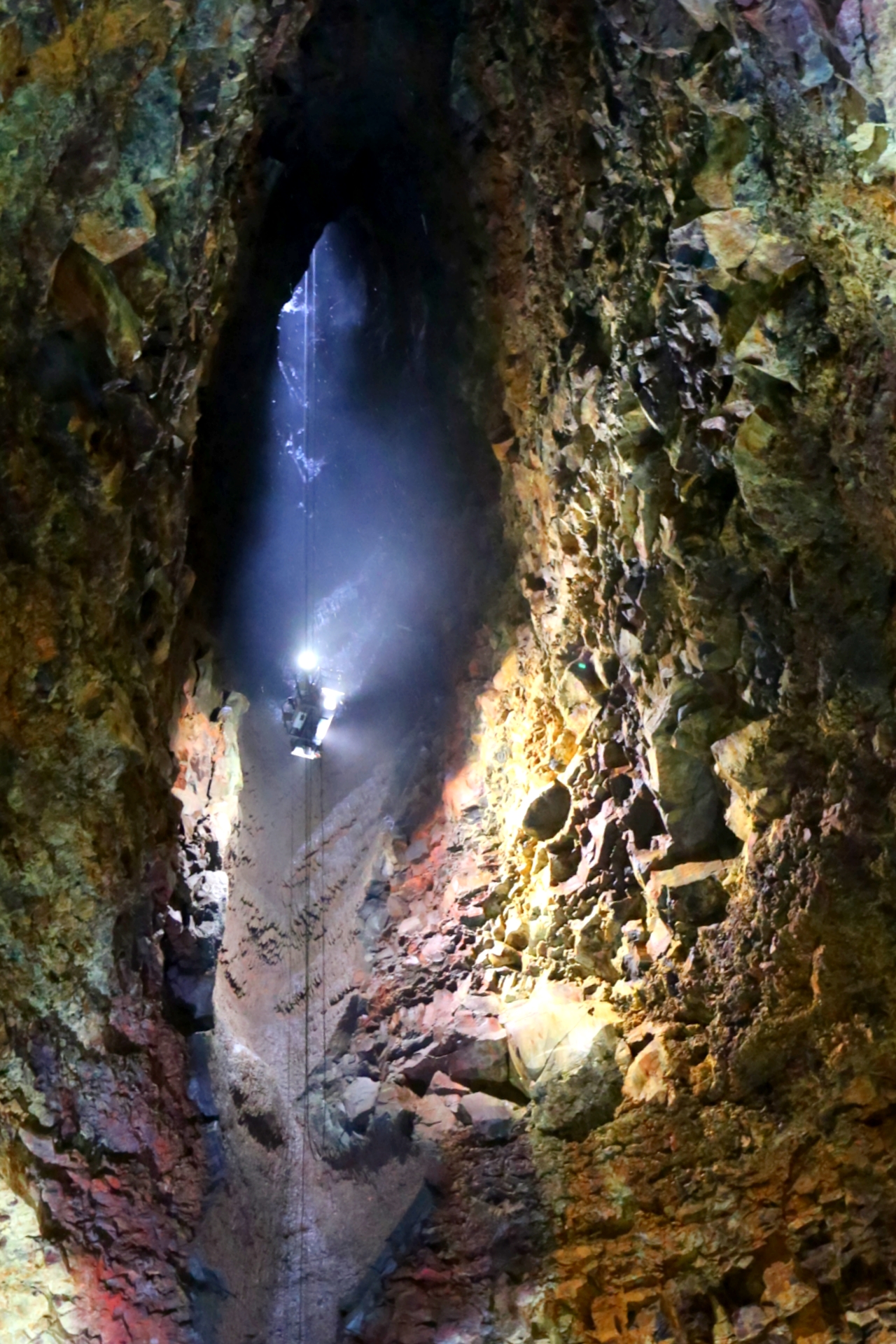 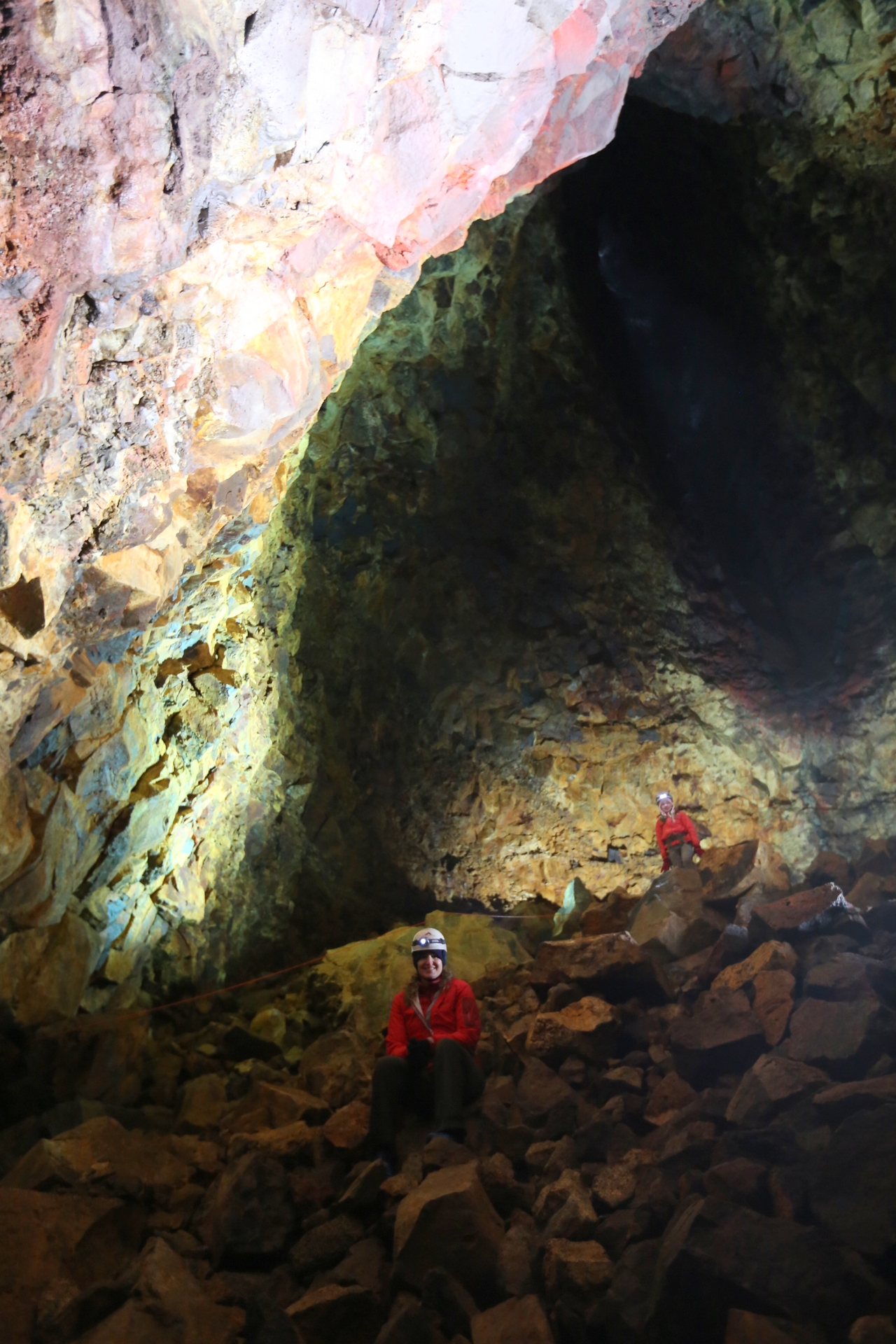 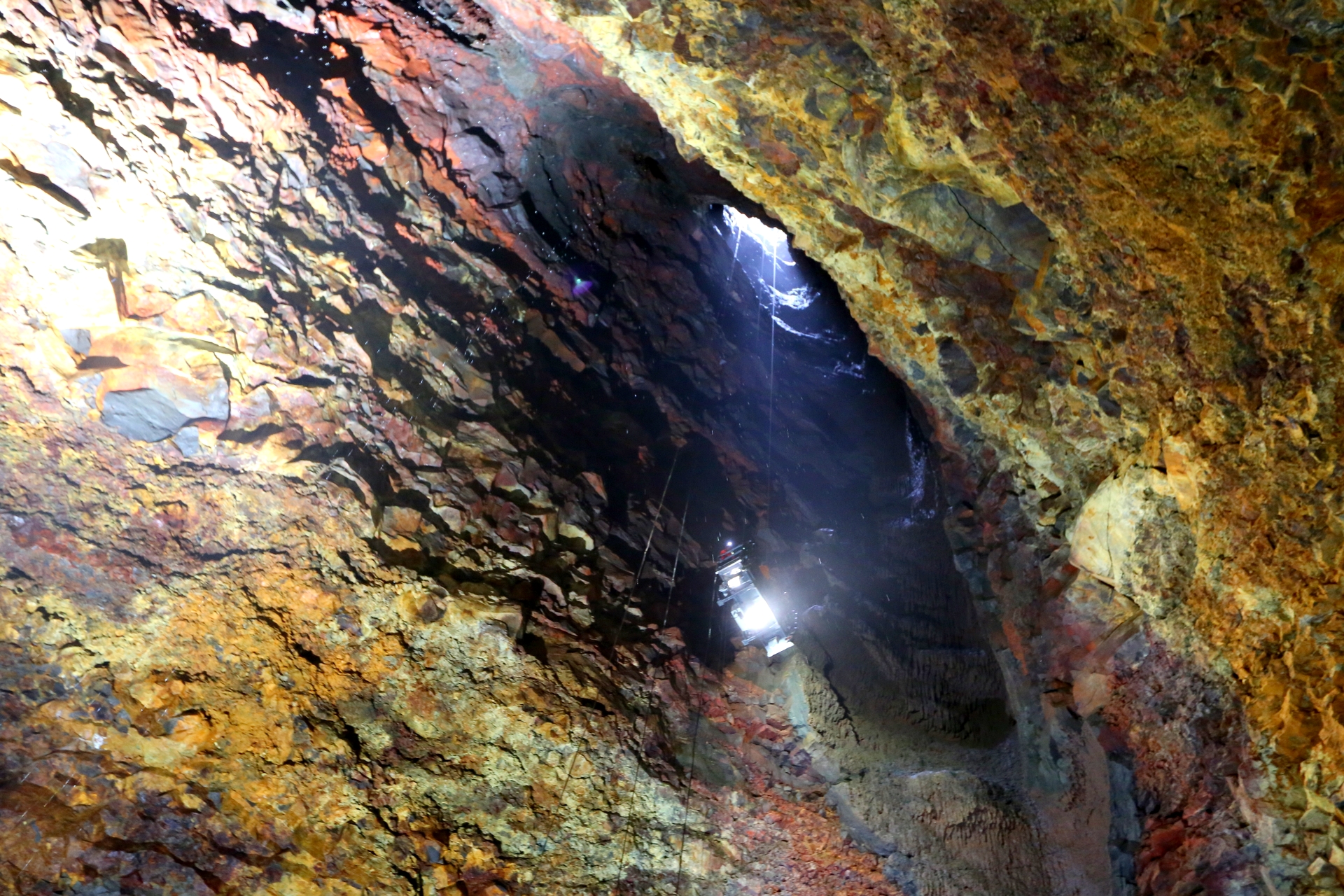 After about 40 minutes in the chamber it was time to ride the lift back up. This time, however, we were prepared for gusty conditions over the top of the hill:

After another warming hut stop for some soup, we headed back to our starting point.

The wind and rain were directly in front of us so we were heads-down for 3km. 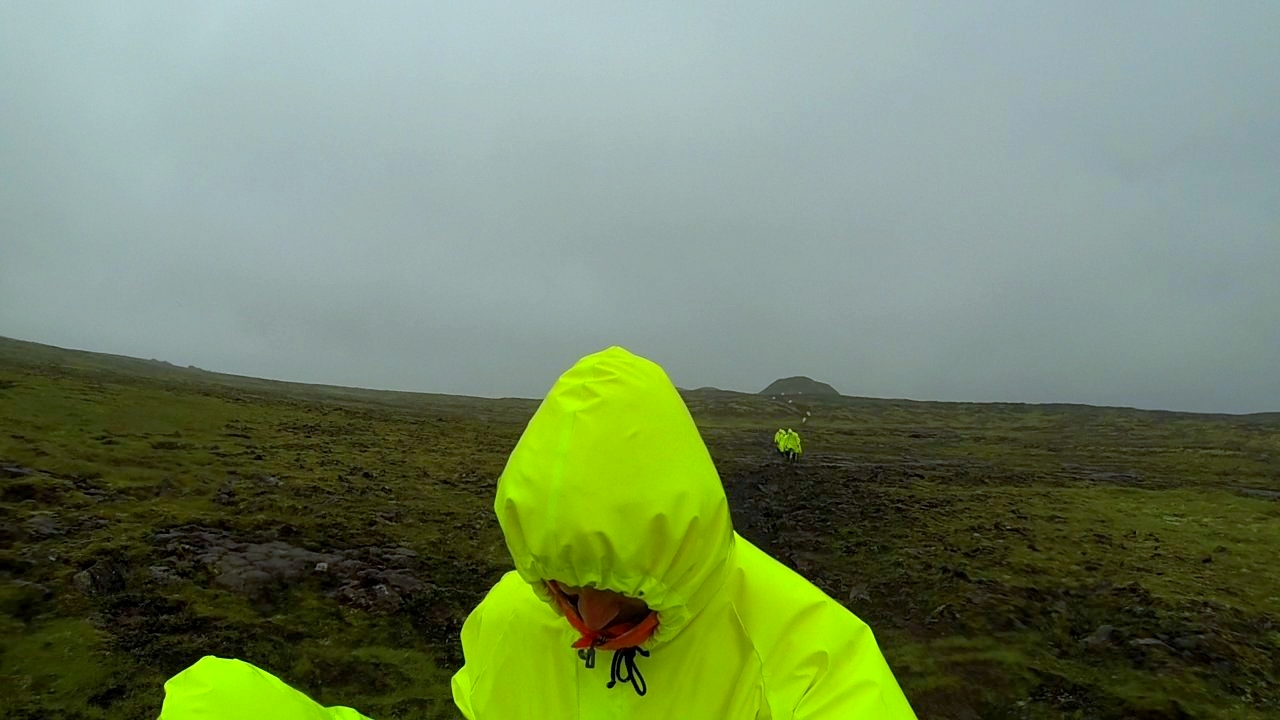 Once back, we removed our slickers, climbed into the waiting van, and headed back to relax a bit before our midnight sun diving adventure in a few hours…

More info:
Inside the Volcano

One thought on “Iceland: Day 4: Diving Deep Part 1: Inside the Volcano”