Iceland: Splashdown at the Blue Lagoon

After 15 hours of flights via Toronto (Air Canada) and Copenhagen, we finally arrived in Iceland via Wow Air to overcast and moody skies.  We had heard that the previous couple weeks had been wet, so we were hoping for better weather.  We also hoped to take advantage of the 24-hours of daylight during the summer solstice.

Iceland is almost halfway between Greenland and Norway (closer to Greenland), and it is at the same latitudes as Alaska.  It lies directly over the Mid-Atlantic ridge which is formed by the separation of the Eurasian and North American tectonic plates moving apart by about one inch per year (image from USGS):

Needless to say, Iceland has a history of volcanic activity and earthquakes as the earth moves and shifts.   One interesting fact we learned – or was touted by one of our guides – is that the 8-month eruption of Laki between 1783 and 1784 is said to have started the French Revolution because the ash and poisonous gas cloud killed crops and people in Europe, sparking a revolt.  Its effects were felt worldwide as far as India, Africa, and North America where temperatures and rainfall were affected.  In Iceland, 25% of the population was killed as well as over 50% of its livestock.

Here is an 11,000 year old lava flow near the airport, now broken down and covered with moss – a very foreign looking landscape: 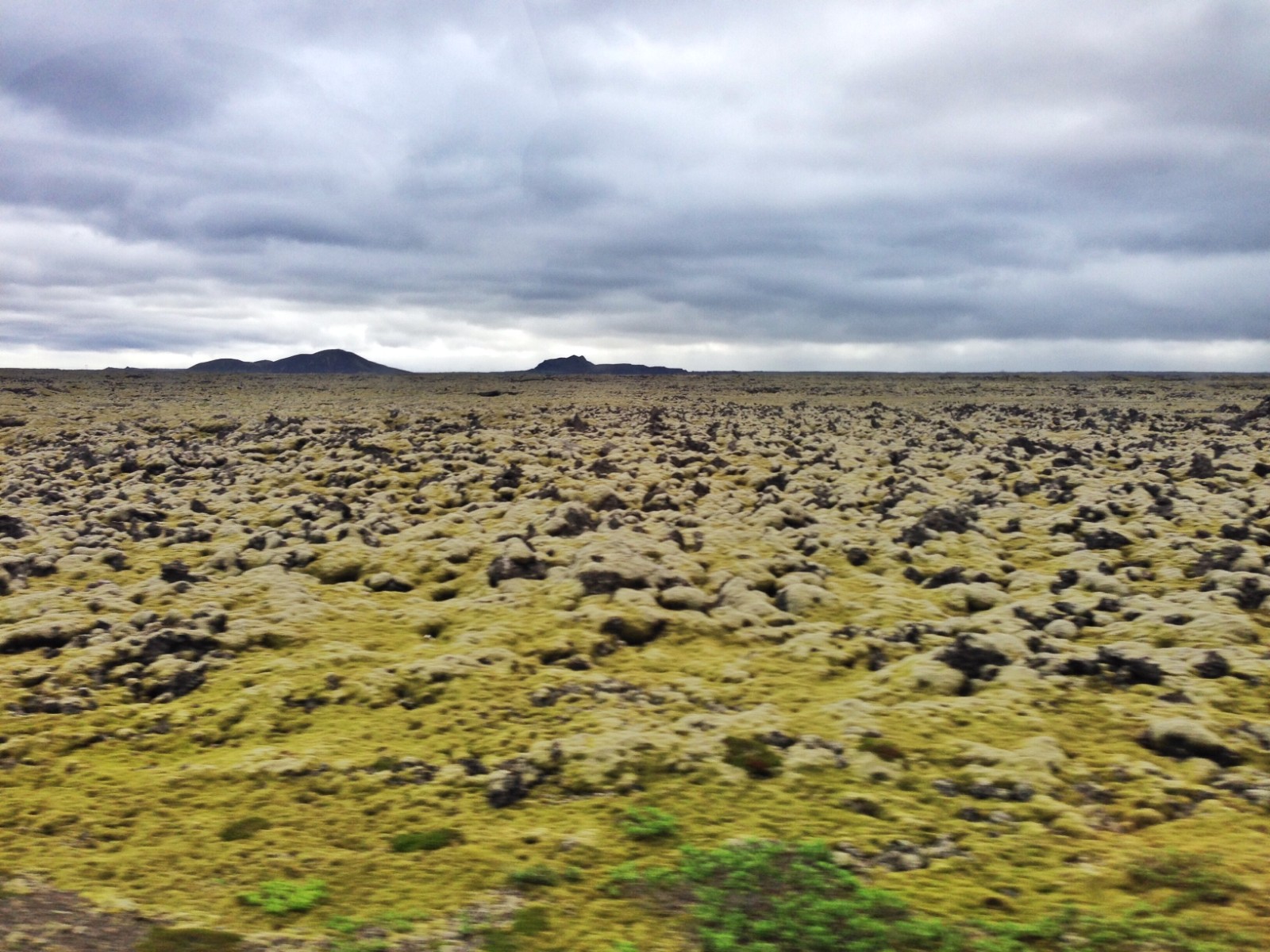 The Blue Lagoon is a man made pool that is fed from the neighboring geothermal power plant. The over-400F degree water is pumped from underground and drives steam turbines, reducing the effective temperature.  This reduced-temperature water is what feeds and heats the lagoon.

The entrance path has been cut through a lava flow: 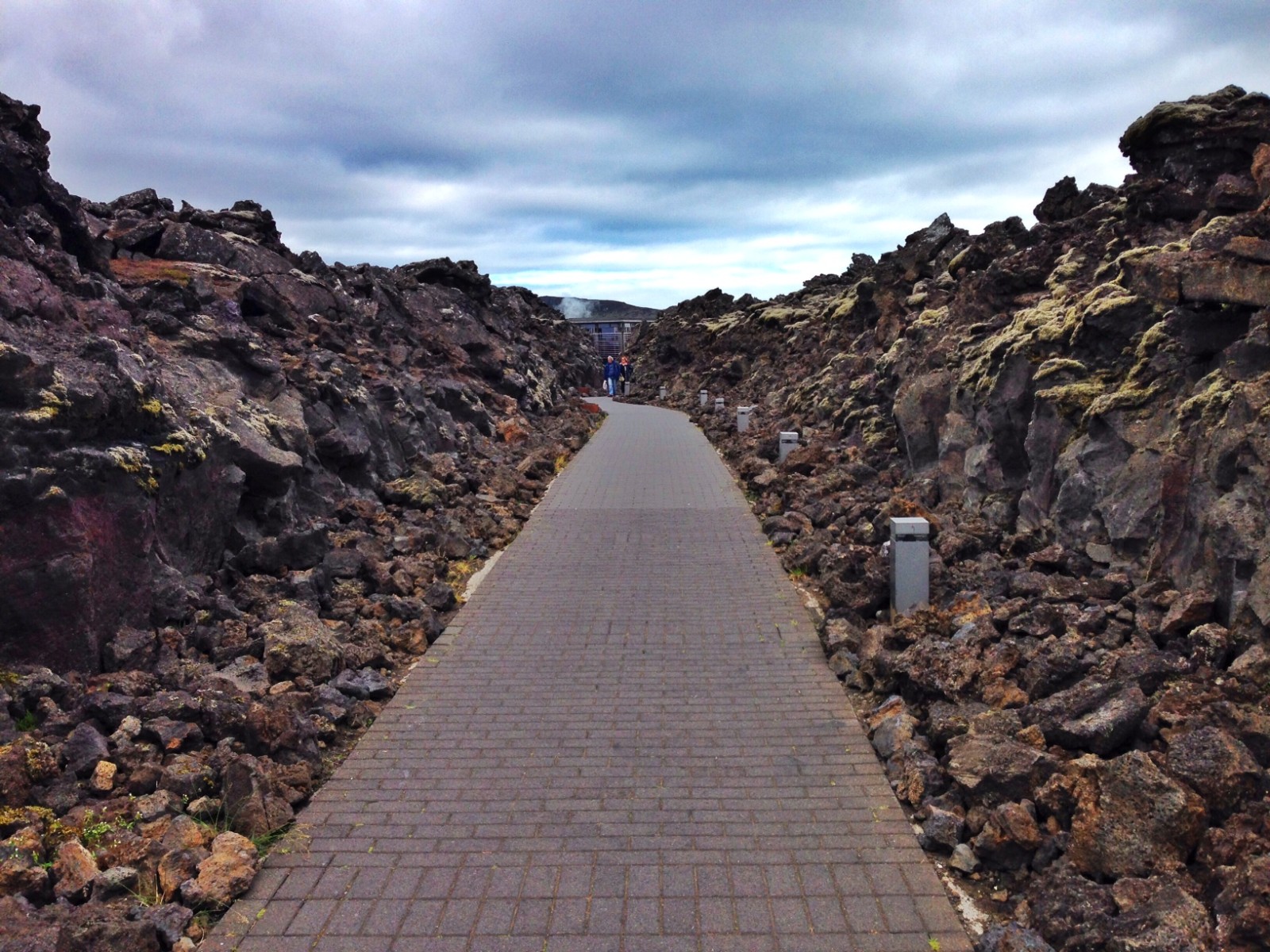 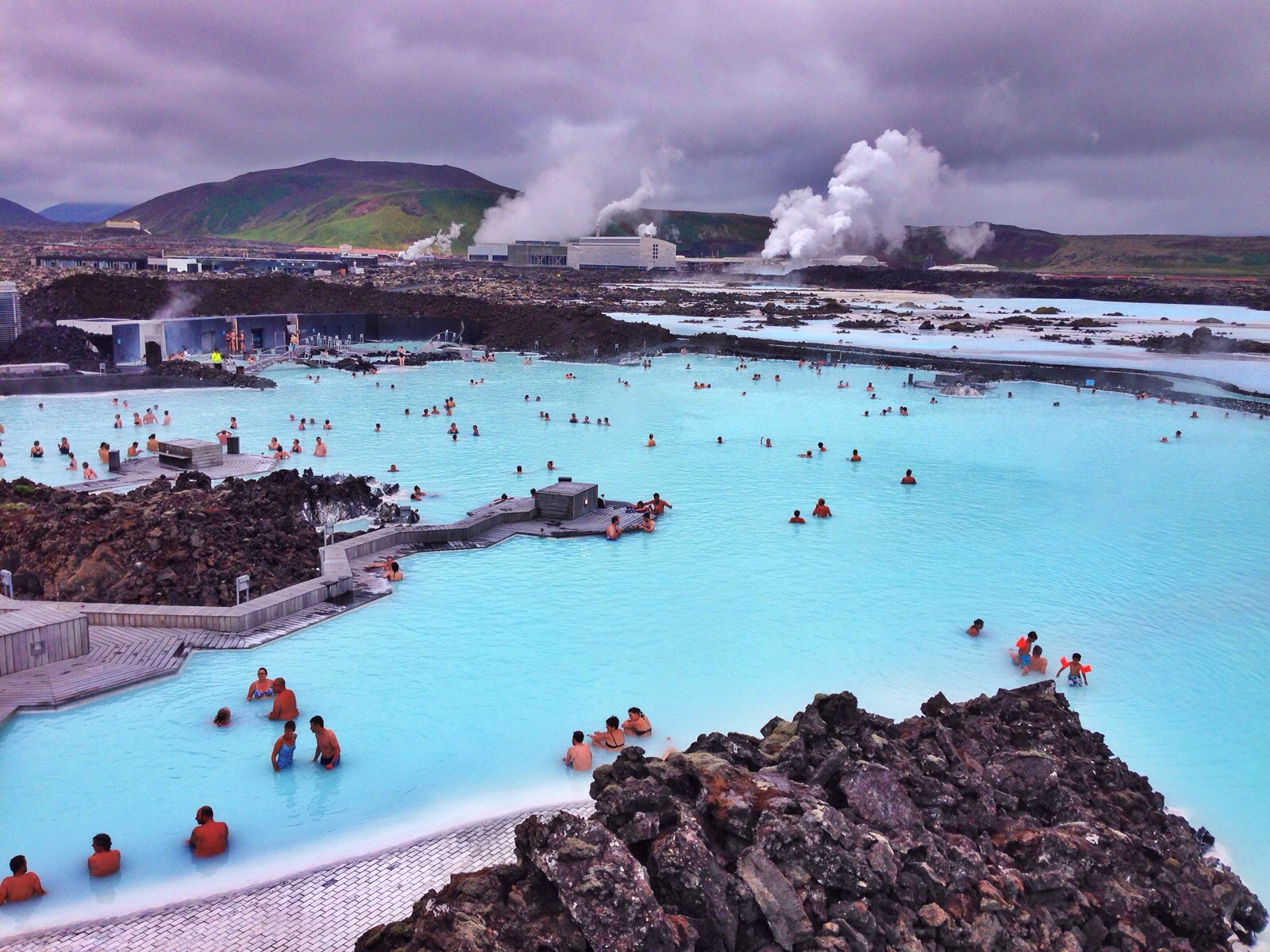 Fifteen years ago, we flew IcelandAir to Europe and took advantage of the Iceland layover on the way back. But back in ’99, we traveled in January (yes, January), when the sun rises at 10:30AM and sets at 2:30PM, and visited the Blue Lagoon and took the Golden Circle (Geysir, Gullfoss) trip. So this time, we were excited to experience the midnight sun where there is 24-hours of daylight.  Here is a Blue Lagoon photo from January 1999 (note the sunset – this was probably between 2:30 and 3 PM in the afternoon: 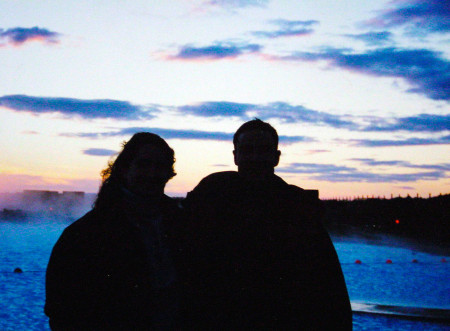 This time, we arrived around 4PM and there was plenty of light.

After storing our luggage at the entrance and renting towels, we changed and plunged back into the Blue Lagoon. When we first visited, it was very basic and simple. Today it’s a bit more polished with modern changing facilities (showers, lockers), restaurants, full service spa, and swim up bar – all changes for a better destination experience and an easy layover excursion if you have a couple hours in Iceland.  At the swim up bars you can buy the white mud or some black sand/pumice (we didn’t purchase any so we’re not sure exactly what it was), but there was also the white silica mud available around the perimeter of the lagoon. 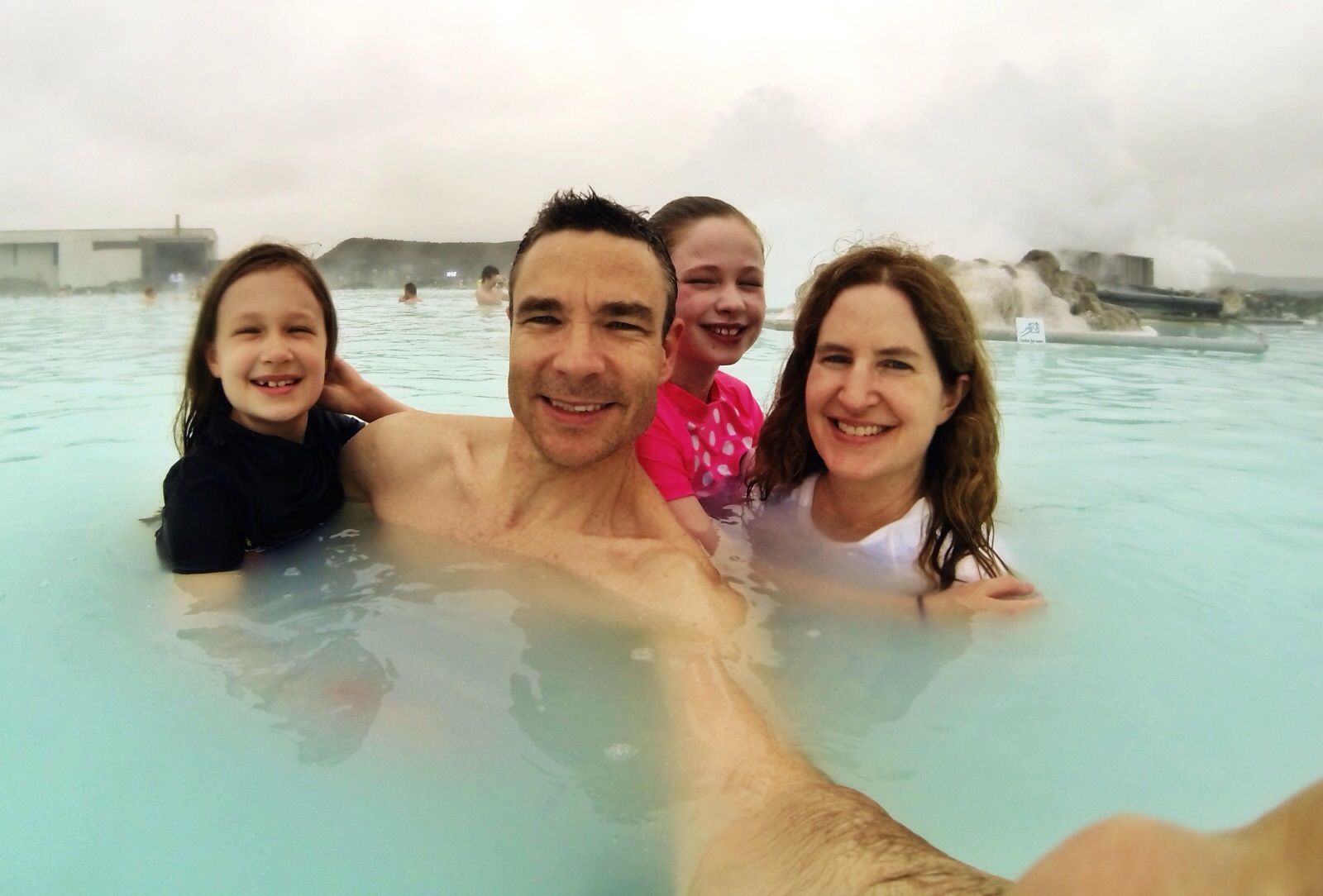 We scooped mud from buckets with ladles and smeared it on our faces (that’s a mud-bucket/platform/ladle behind us). 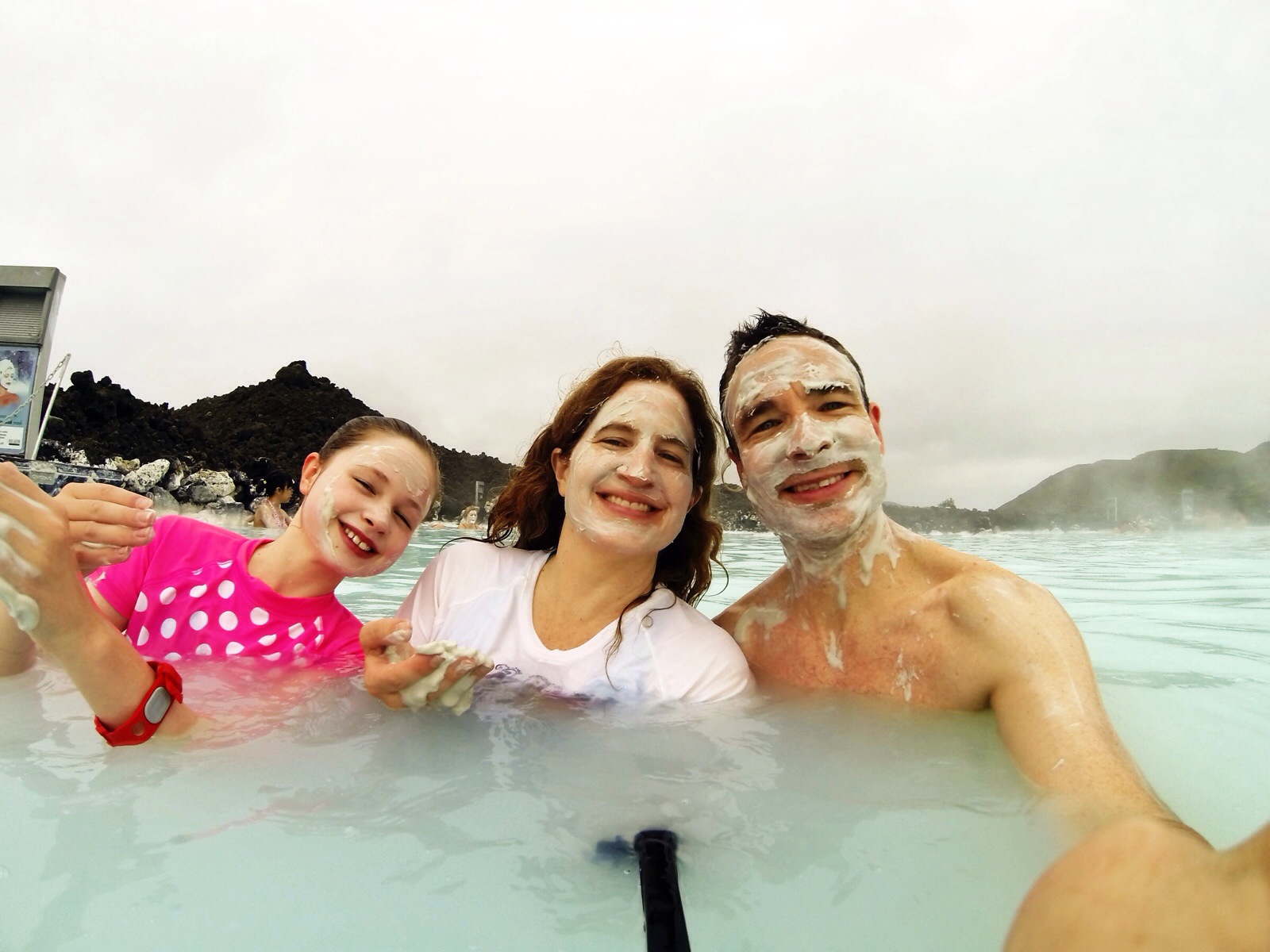 And shot a group photo of the group: 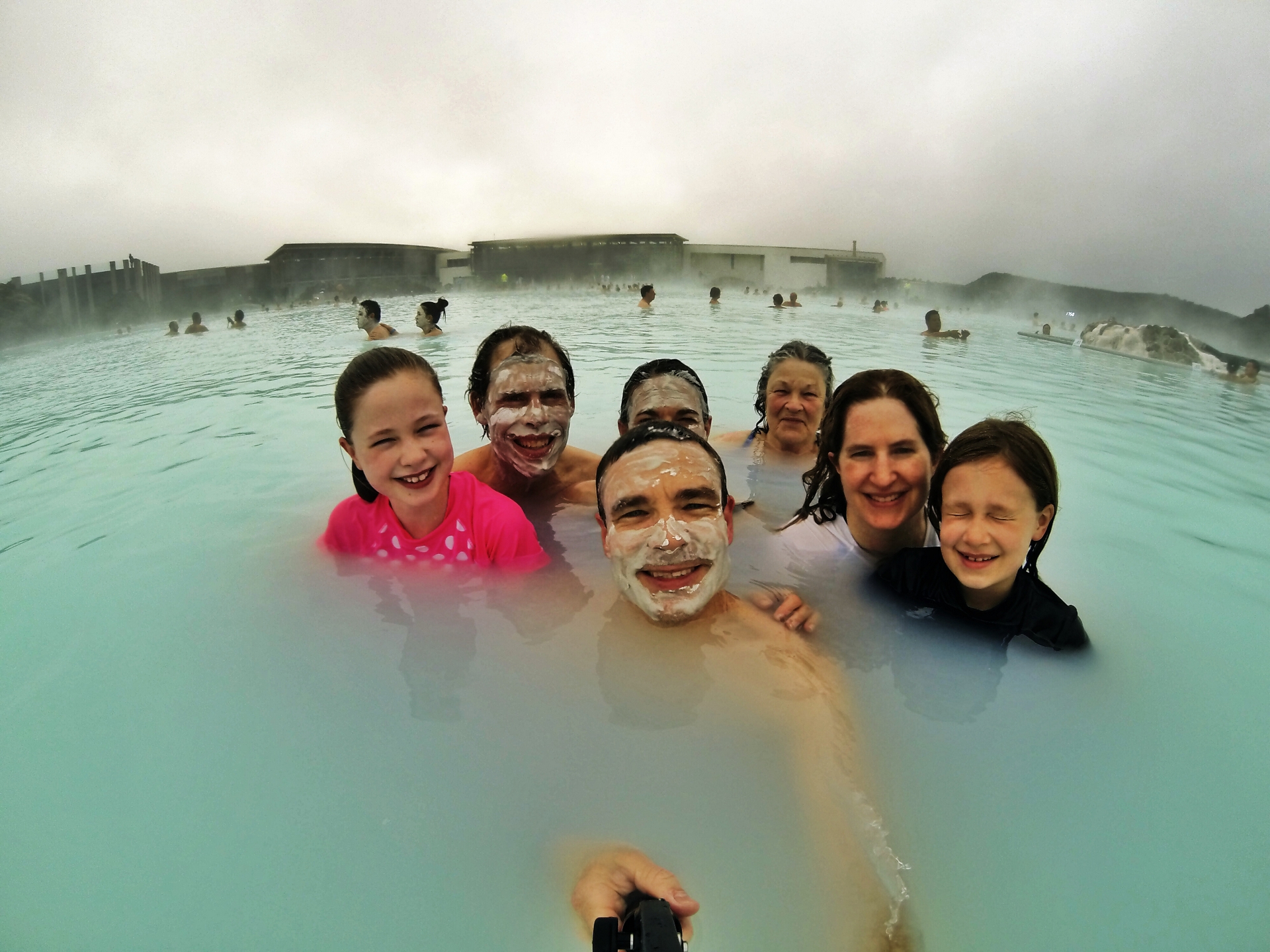 We spent a couple hours wading in the water and swimming through the lava igloo before hopping out for a bite to eat at the on-site restaurant called Lava. 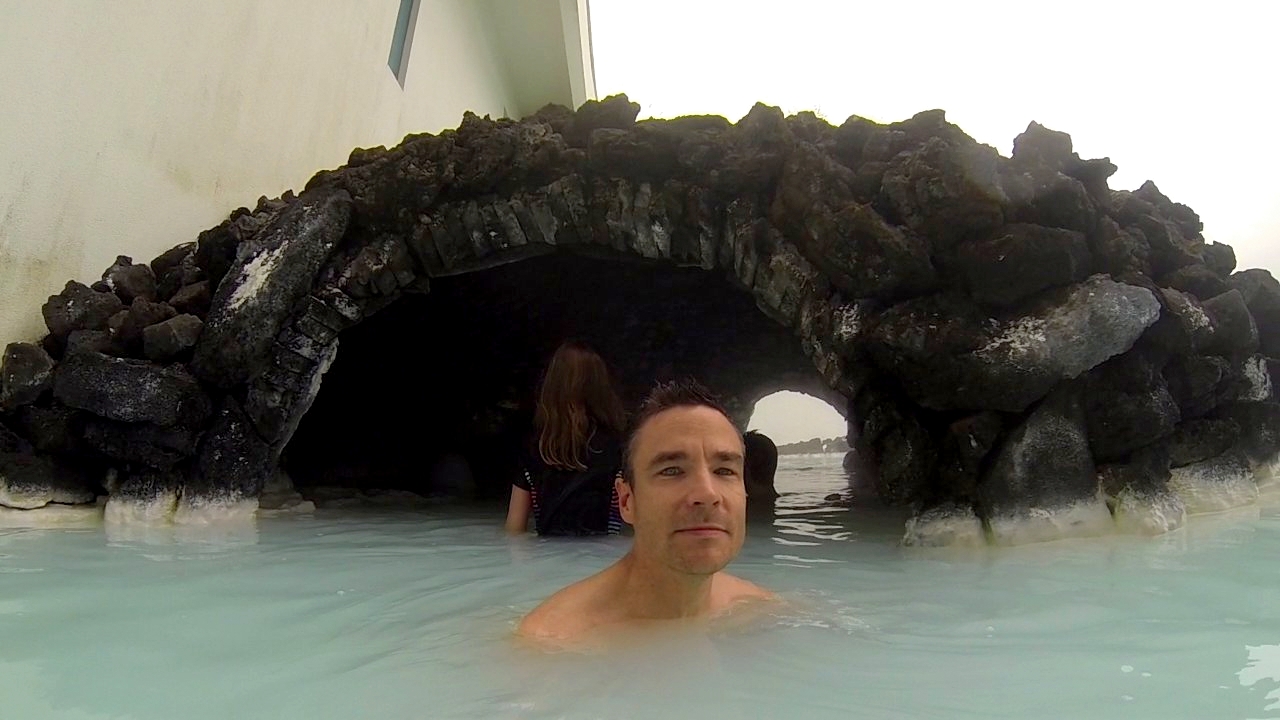 We had dinner at the Blue Lagoon’s Lava Restaurant where we had some amazing “torched salmon”.  It’s prepared with thick pieces of smoked salmon finished with a little brûlée. It’s delicious and dissolves in your mouth!  We also enjoyed the blue signature cocktails: 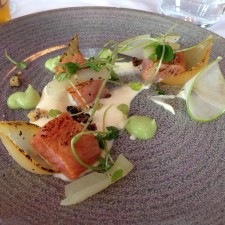 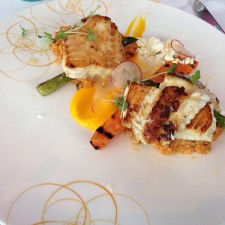 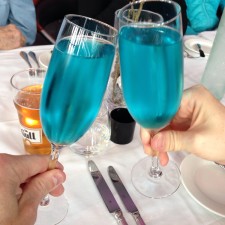 Some views off the roof of the Lava Restaurant, aptly named because it was carved out from the lava flow: 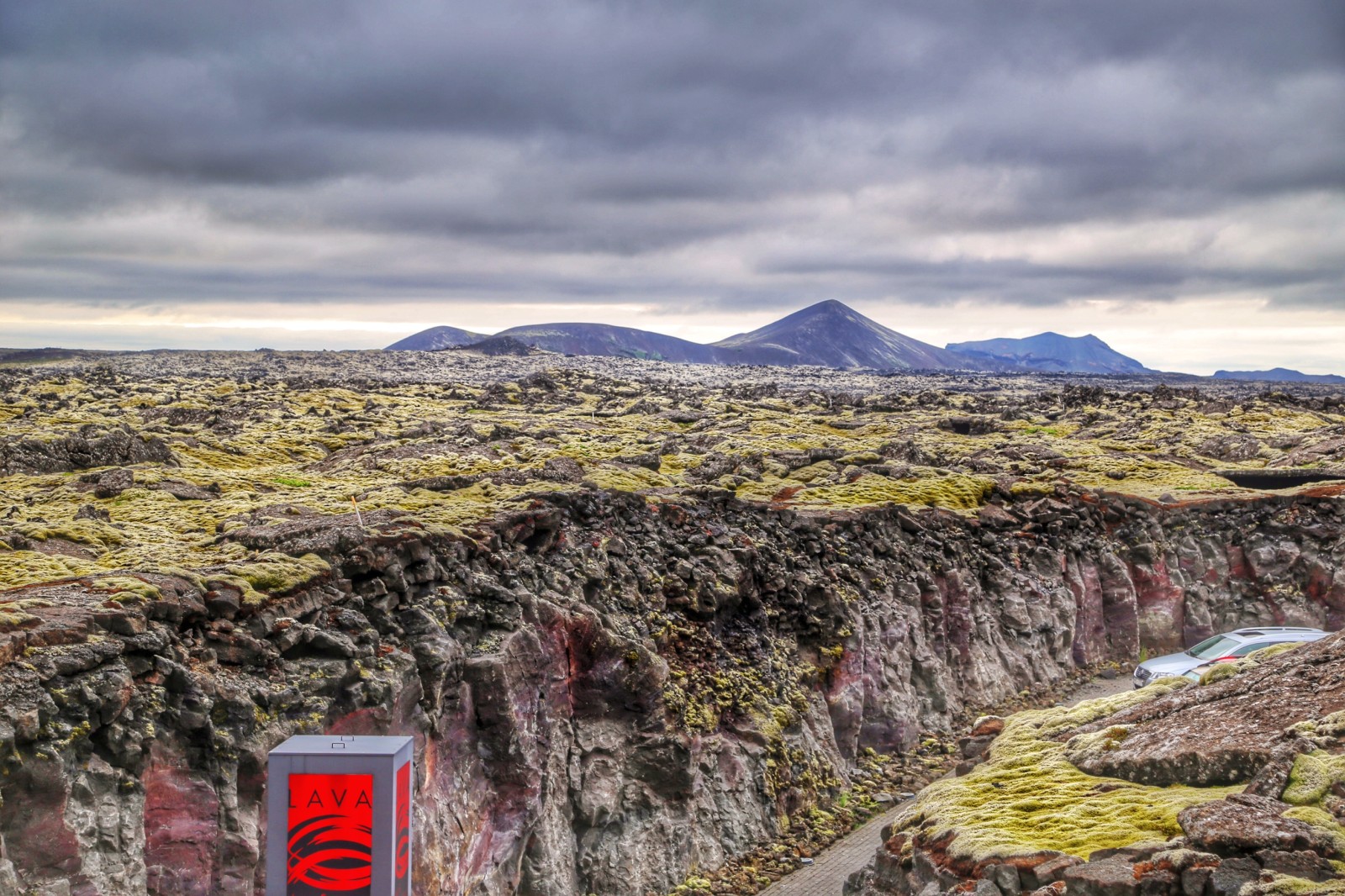 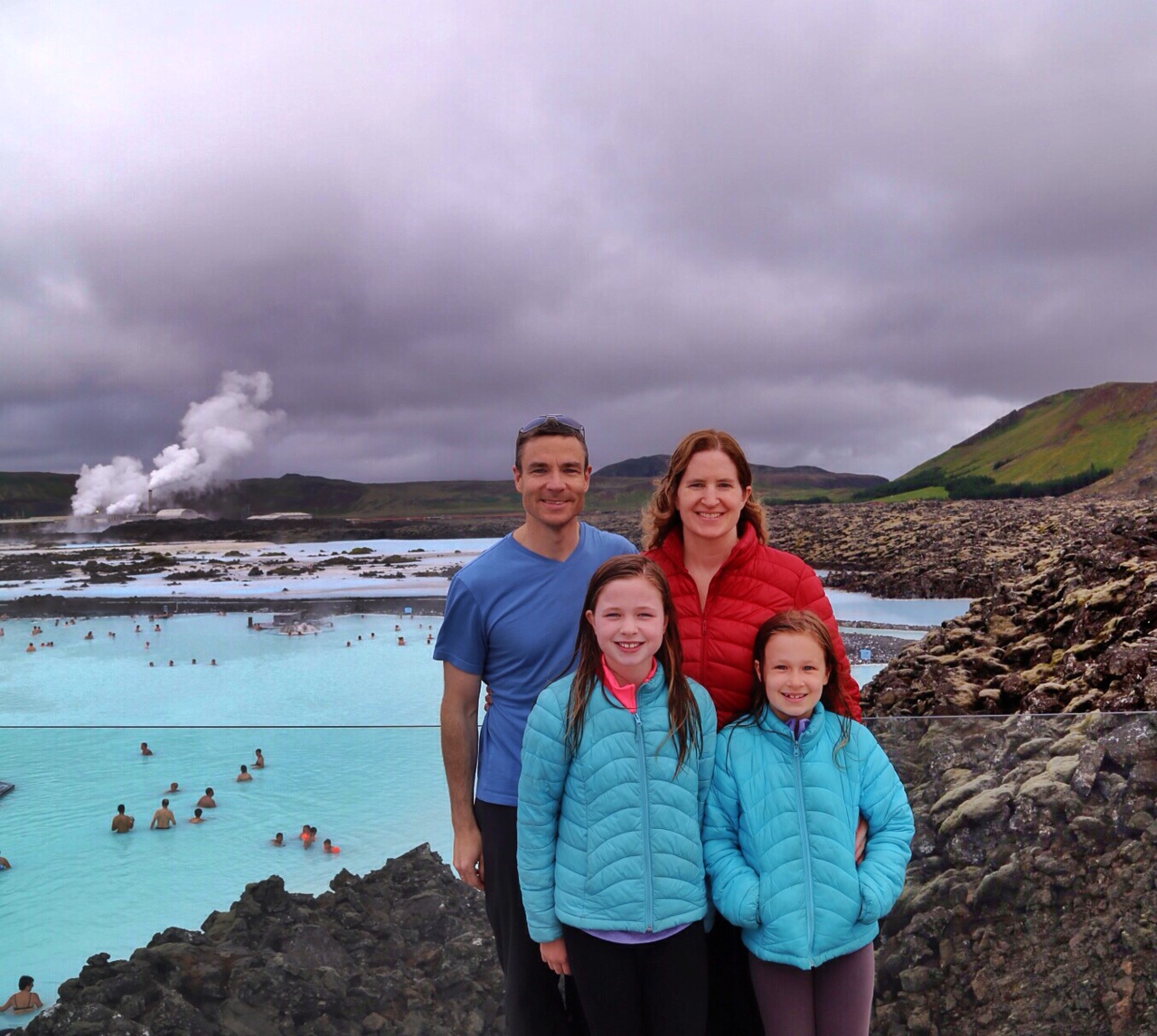 And a few more shots of the Lagoon itself 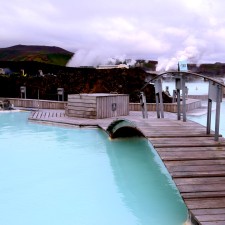 There are a few of these little bridges around the lagoon 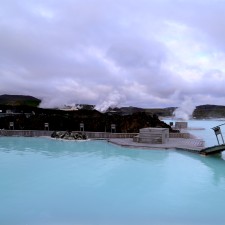 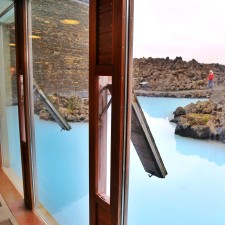 This is from inside the lobby

One parting shot of a neighboring overflow pool just outside the Blue Lagoon: 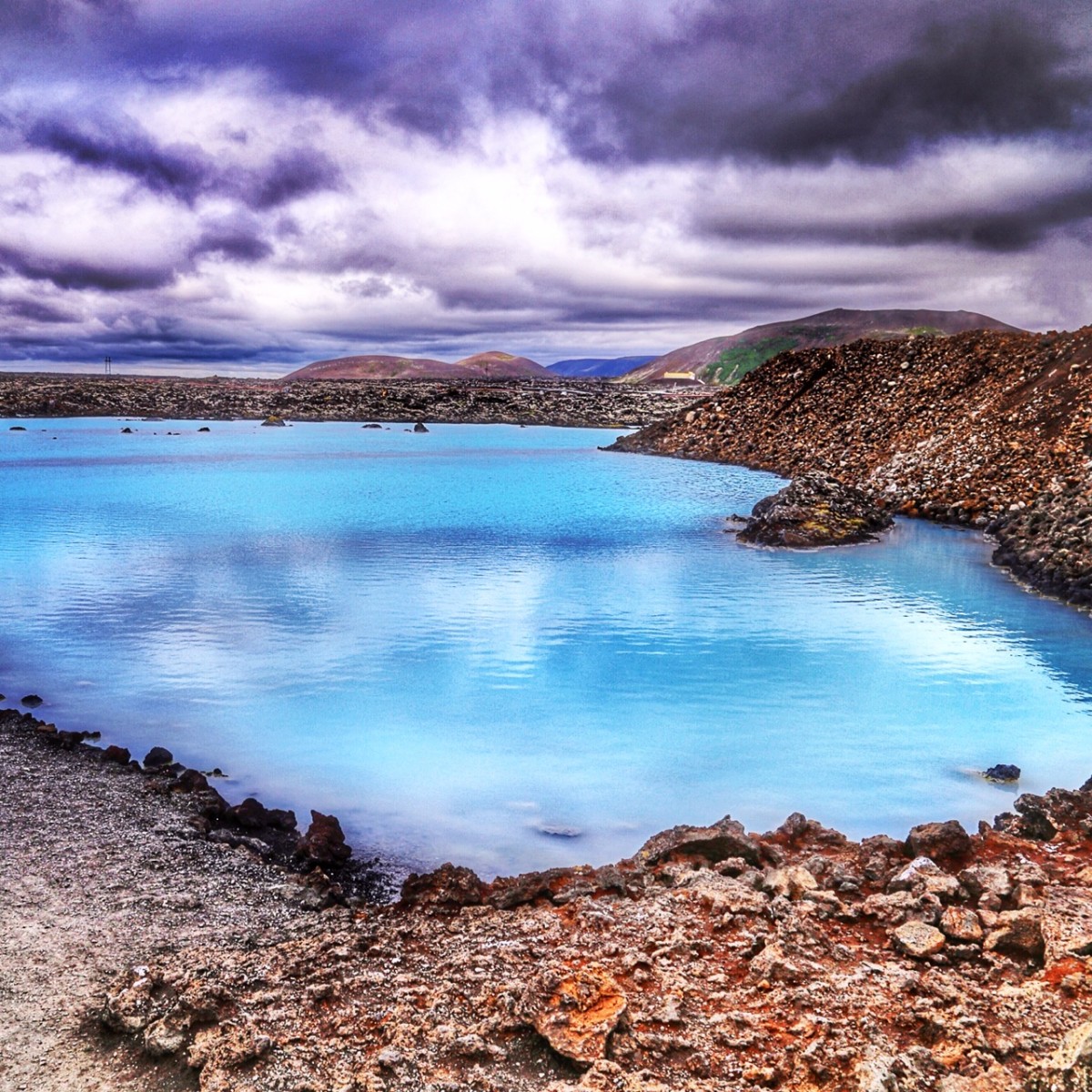 We boarded the bus to head up to Reykjavik where we had rented three apartments through VRBO.  The interaction with the owners was very odd, and I was cautiously optimistic that we would actually have a place to stay.  It seemed like a scam – the reviews were glowing but few and far between, the email exchanges were prompt until a deposit was sent and then sporadic, emails were short and did not offer a contract until asked, and we were supposed to call the owner (not the “brother” who deals with the reservations and the main point of contact) 30 minutes before we arrived so that he could let us in – and we had to call from an Iceland phone number because he wouldn’t accept international calls… It was just a little weird.  But, they were extremely helpful and friendly (we ran into them a few times in town), the owner was nice, and the apartments worked great and were fairly central to the main street, so it was all good!

When we arrived in Reykjavik, it was 10:30.  Here is a panorama out the front of one of our apartments at 11PM in Reykjavik a.k.a. sunset ! : 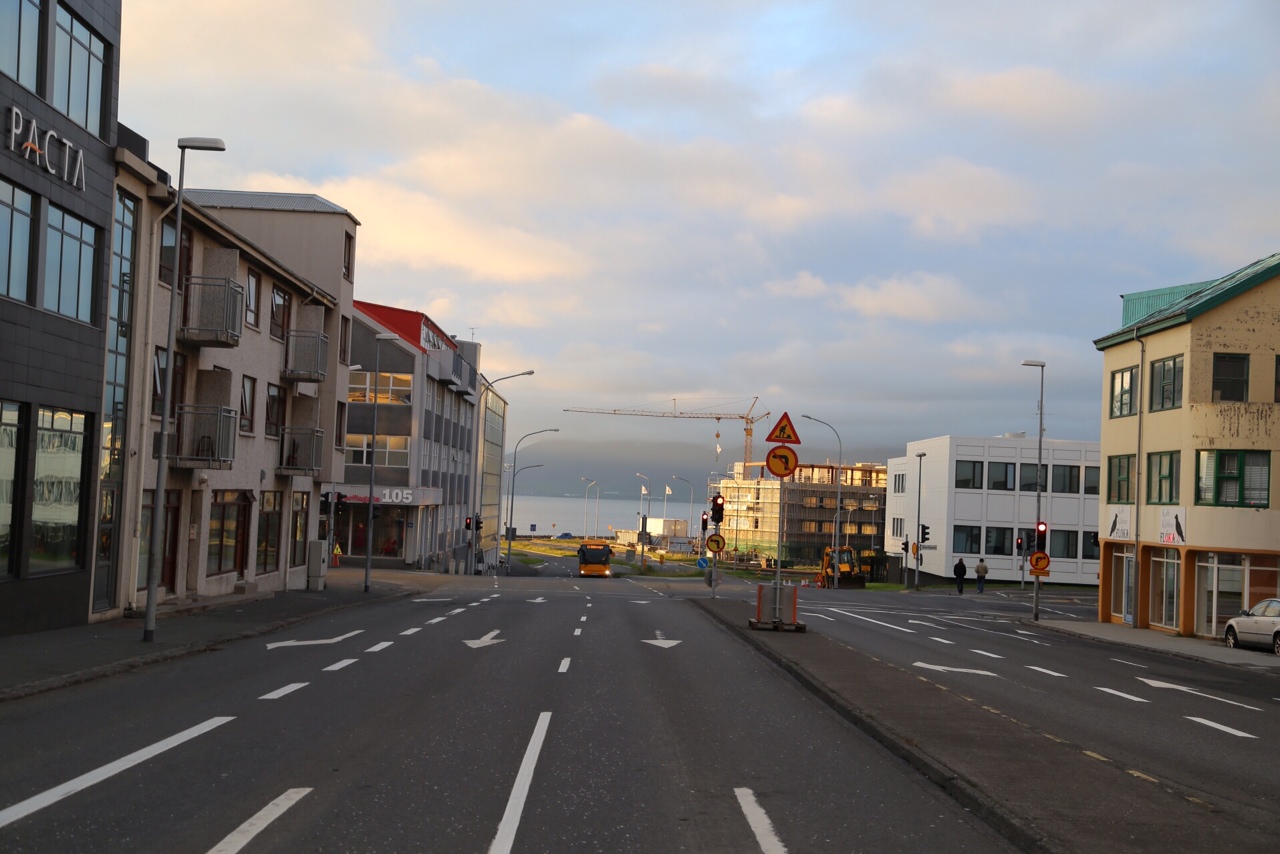 And Midnight on the clock tower of the Hallgrímskirkja church (more on that later) out our back patio: 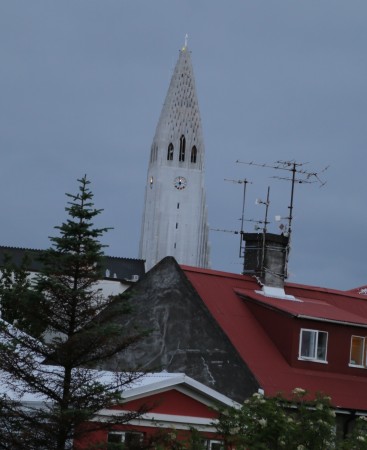 One thought on “Iceland: Splashdown at the Blue Lagoon”