After Moray, we headed for our last and final stop: Ollantaytambo. We left Moray, passed through Maras, and drove back down the switchbacks above Urubamba before up the valley. Below is a screenshot from Google Earth looking up the valley towards Machu Picchu for some geographical context: Maras sits on a plateau above the valley, with Ollantaytambo at the far end (it is also where we catch the train to Aguas Calientes – Machu Picchu): 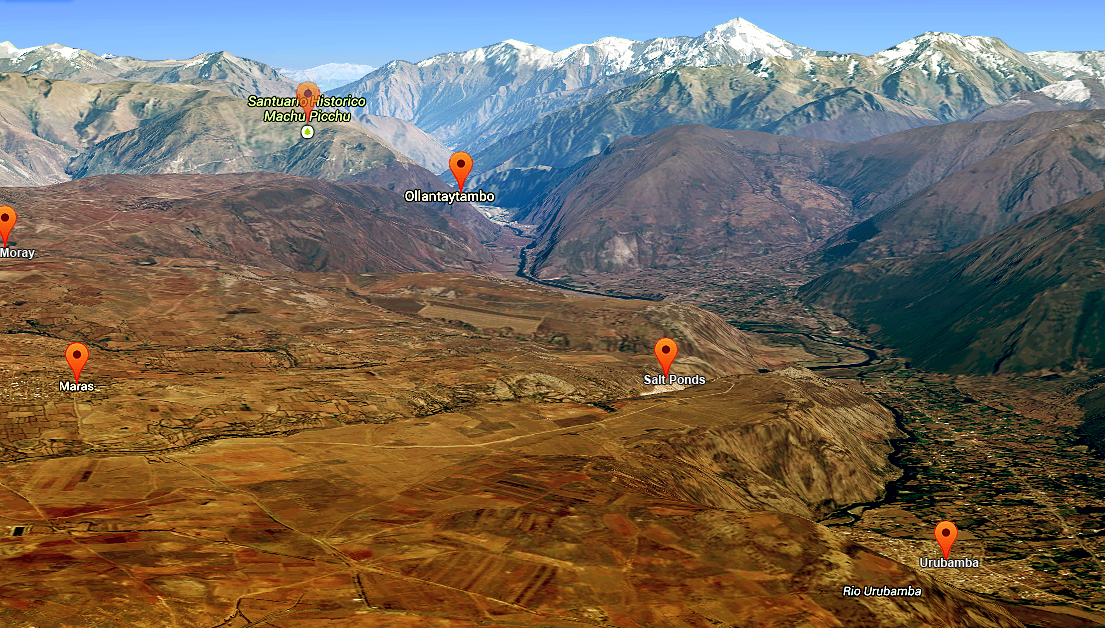 Winding our way up the valley, it felt a little like parts of Wyoming or Alaska with mountains in the distance and a wide willow-lined river flowing near the road. Across the river on the way to Ollantaytambo, we caught a glimpse of the Maras salt ponds (white triangle) from below: 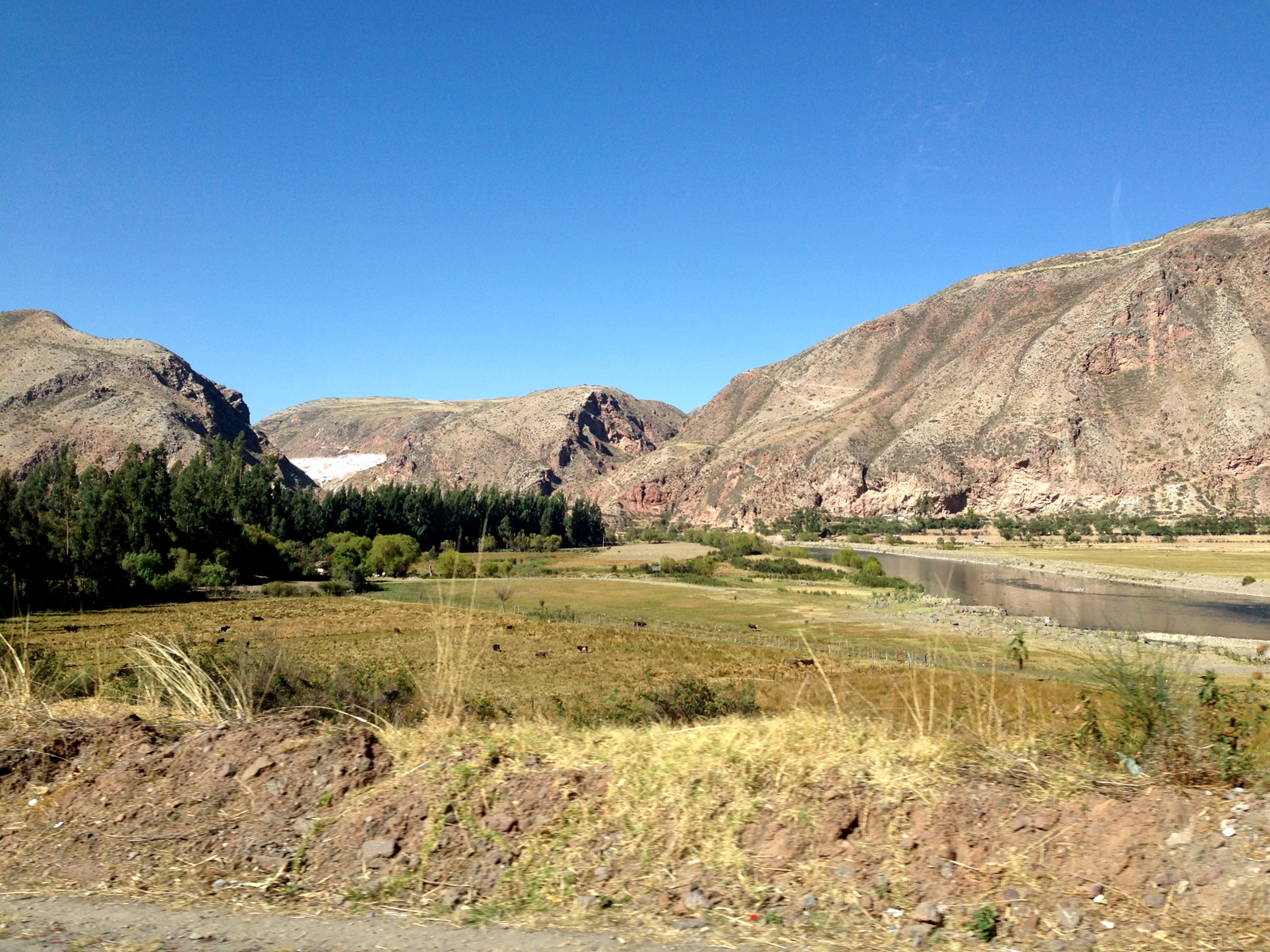 The first thing that we encountered on entering the outskirts of Ollantaytambo was a bit of traffic because there is only a single narrow cobblestone street into and out of the town. Fortunately, the town was prepared with traffic cops to regulate the one-lane road – one direction followed by the other direction. We were first in line to cross for our direction: 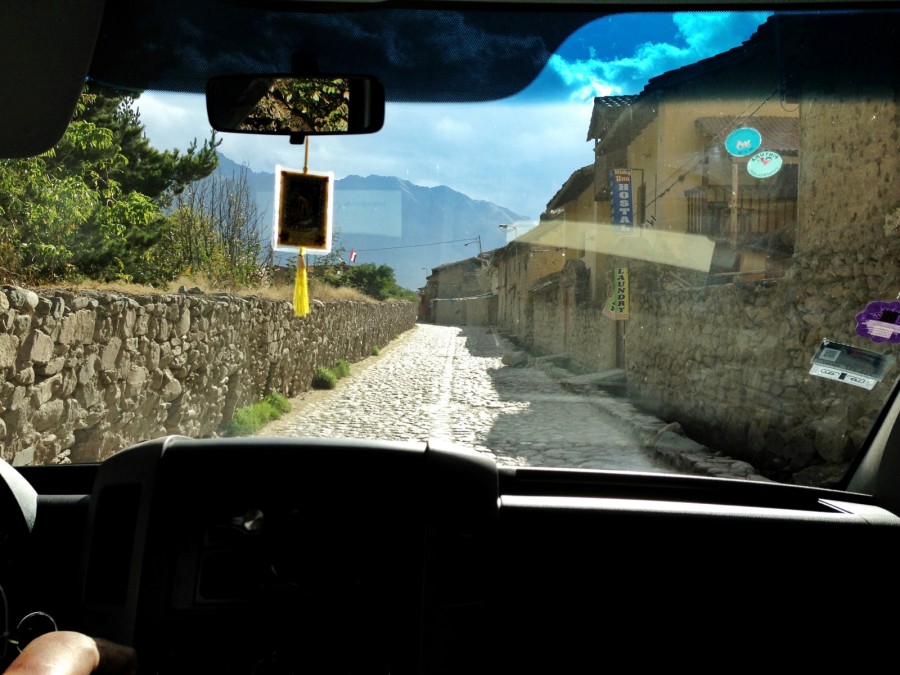 We arrived at about 4PM just as the blinding sun (which made for somewhat poor photography conditions) was about to set behind the massive structure of terraces. Lines of people (tourists) snaked up to the top of the Terraces of Pumatallis: 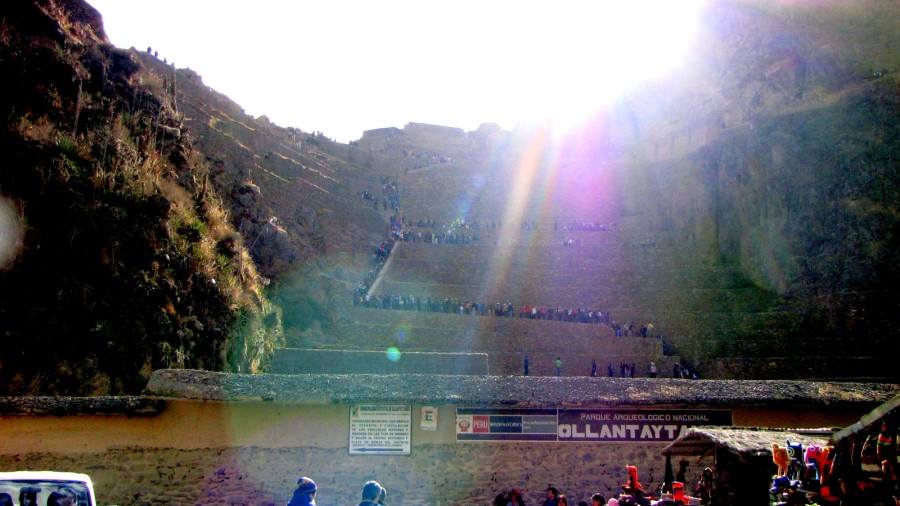 Pachacuti was the 9th king of Cusco who built the Inca Empire through a series of conquests of neighboring and distant kingdoms. He became the 1st ruler of the Inca Empire in the mid-1400s, and his rule extended over 300,000 square miles. The heart of the empire was Cusco.

Ollantaytambo was part of Pachacuti’s estate and was used for ceremonial purposes. It was subsequently ransacked by the Spaniards in the mid-1500s who pulled down some of the larger dark gray ceremonial stones from the top and scattered them down the terraces, hence the random dark stones at the bottom.

The view from a couple terraces up. The view is really stunning with the V-notch. The Incas had a series of lookouts along the Sacred Valley that were within line-of-sight of subsequent lookouts. This provided very fast signaling up and down the valley.:

The climb was quite steep! 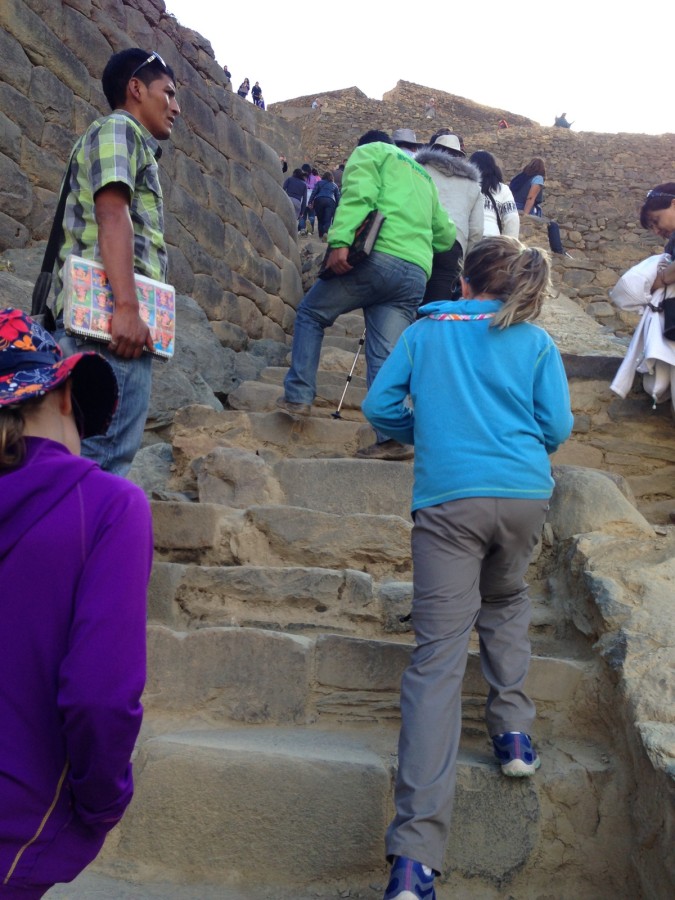 Here are some perspectives trying to catch the elevation change:

Like Saksaywaman, the stone work of the ceremonial stones was very precise: 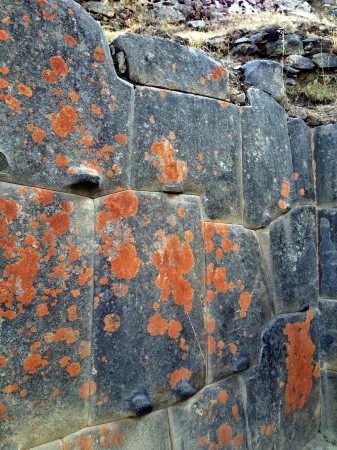 The bumps on the rocks were most likely used as handles or pegs to carry and place them.

Once on top, the views of the town below were beautiful with the rugged terrain surrounding the town below. Note the large black stones at the bottom as well as several terraces up from the bottom. These were pulled down from the top by the Spaniards: 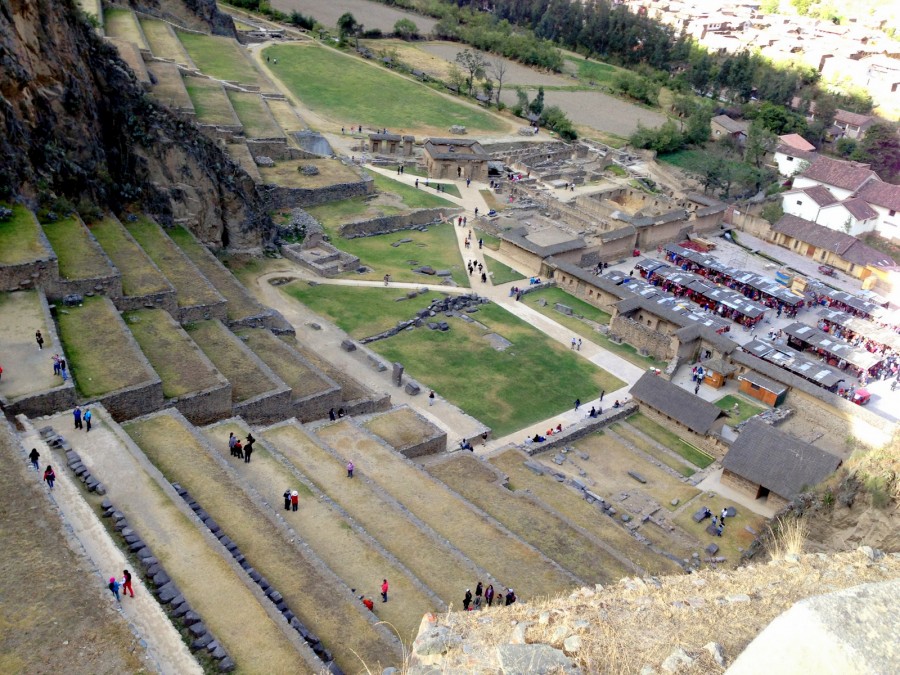 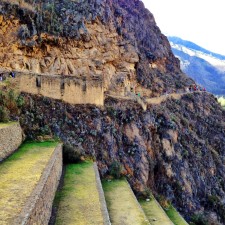 And looking across the valley above the town at the massive hillside with the ruins of Inca storehouses which were set at a higher elevation presumably to maintain a lower temperature. 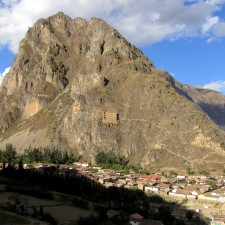 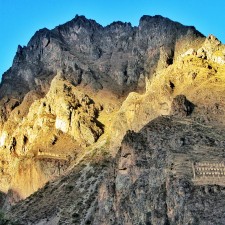 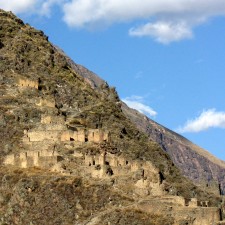 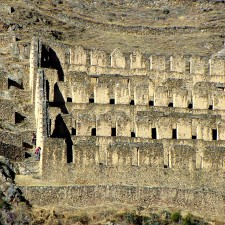 Over the top, on the other side, is a beautiful green valley, and the ever-present snow-capped peaks. 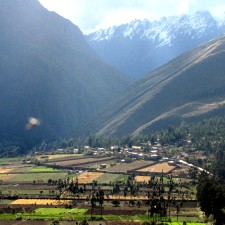 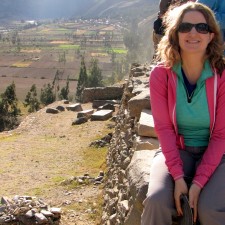 From the top, we hugged the hillside and followed the path around. Looking back towards the top of the terraces: 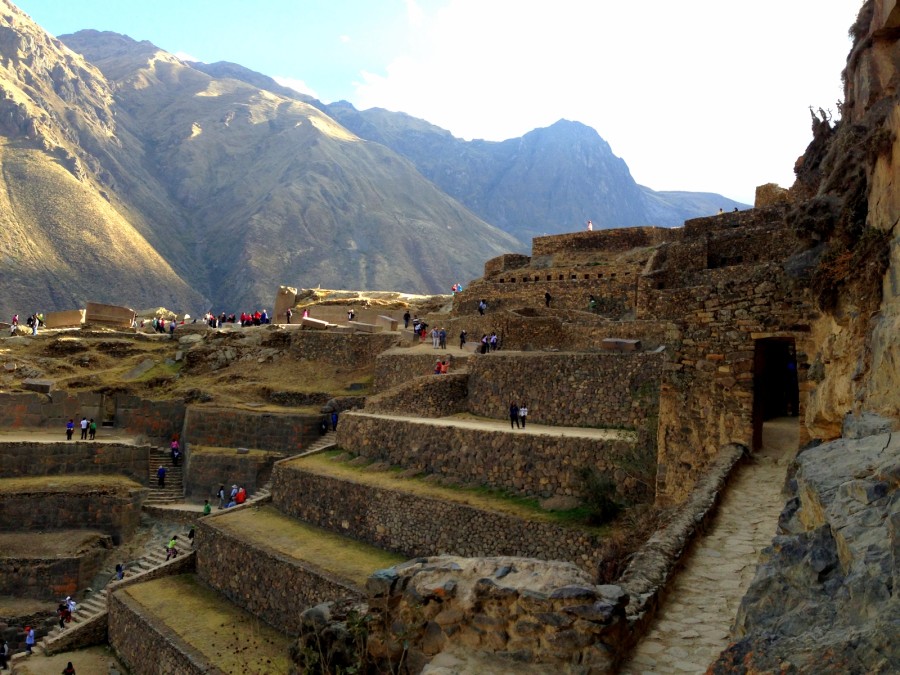 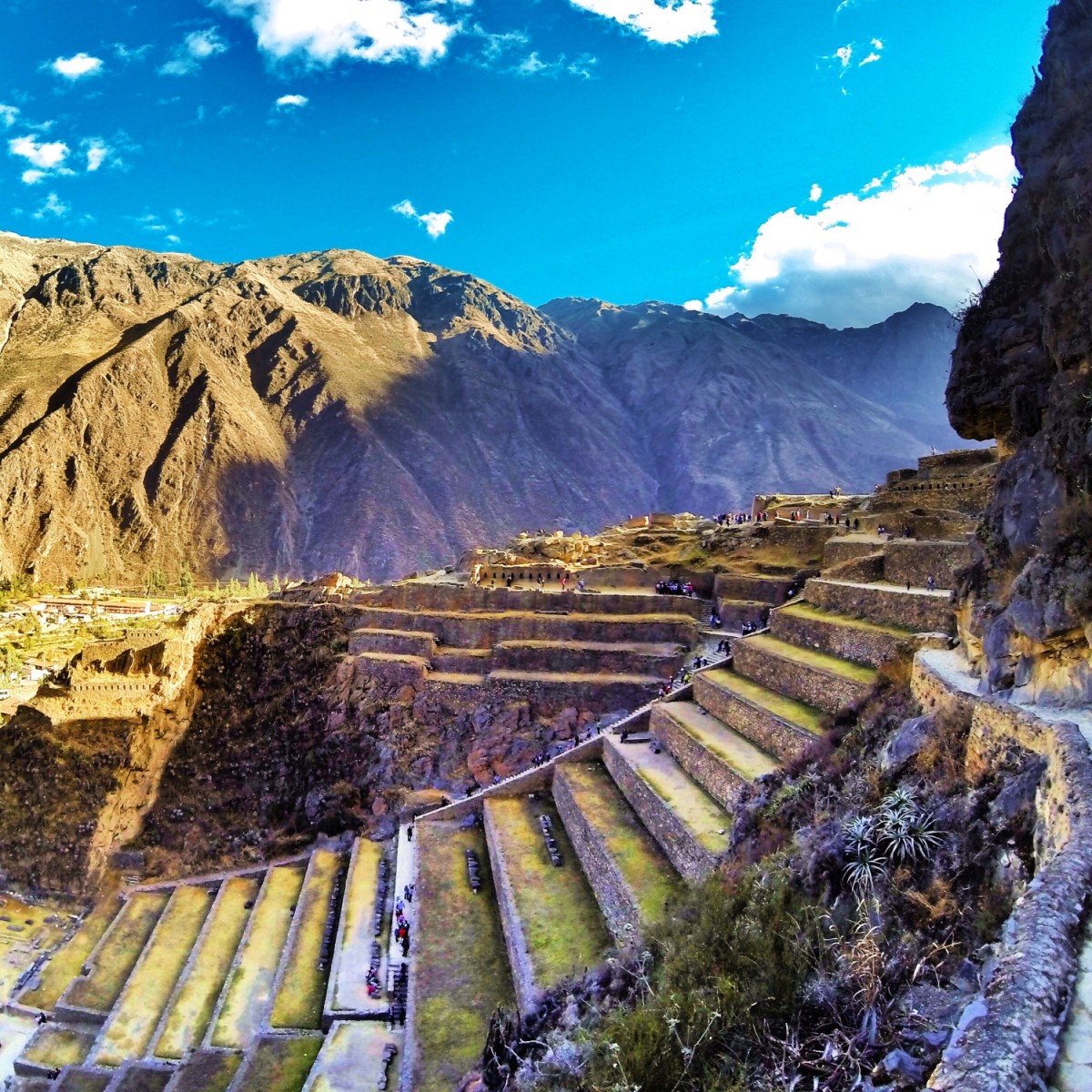 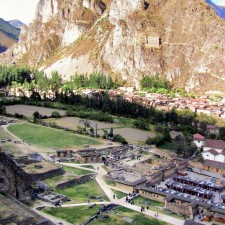 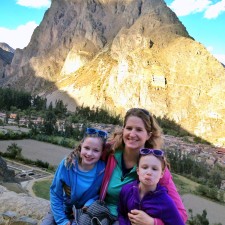 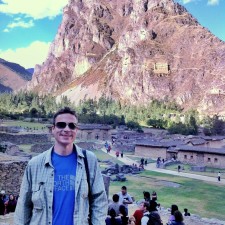 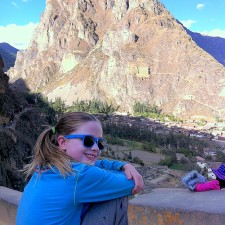 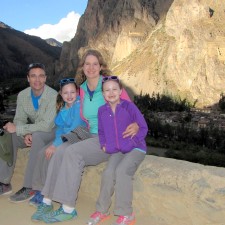 The steps back down were just as steep (note the irrigation channel to the left of the steps): 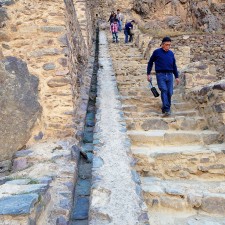 Back down in the village below is the Bath of the Princess (Baño de la Ñusta) with the upper half of the Inca Cross, or Chakana, carved around it.   It was used for ceremonial bathing: 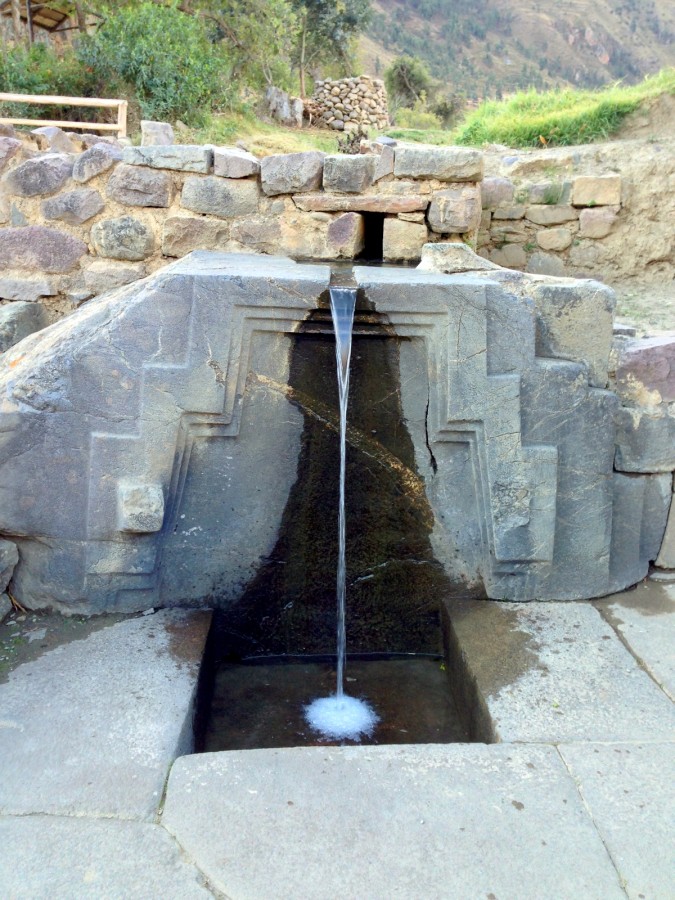 A couple of views from back on the floor of the valley just as the last sun was beaming from behind: 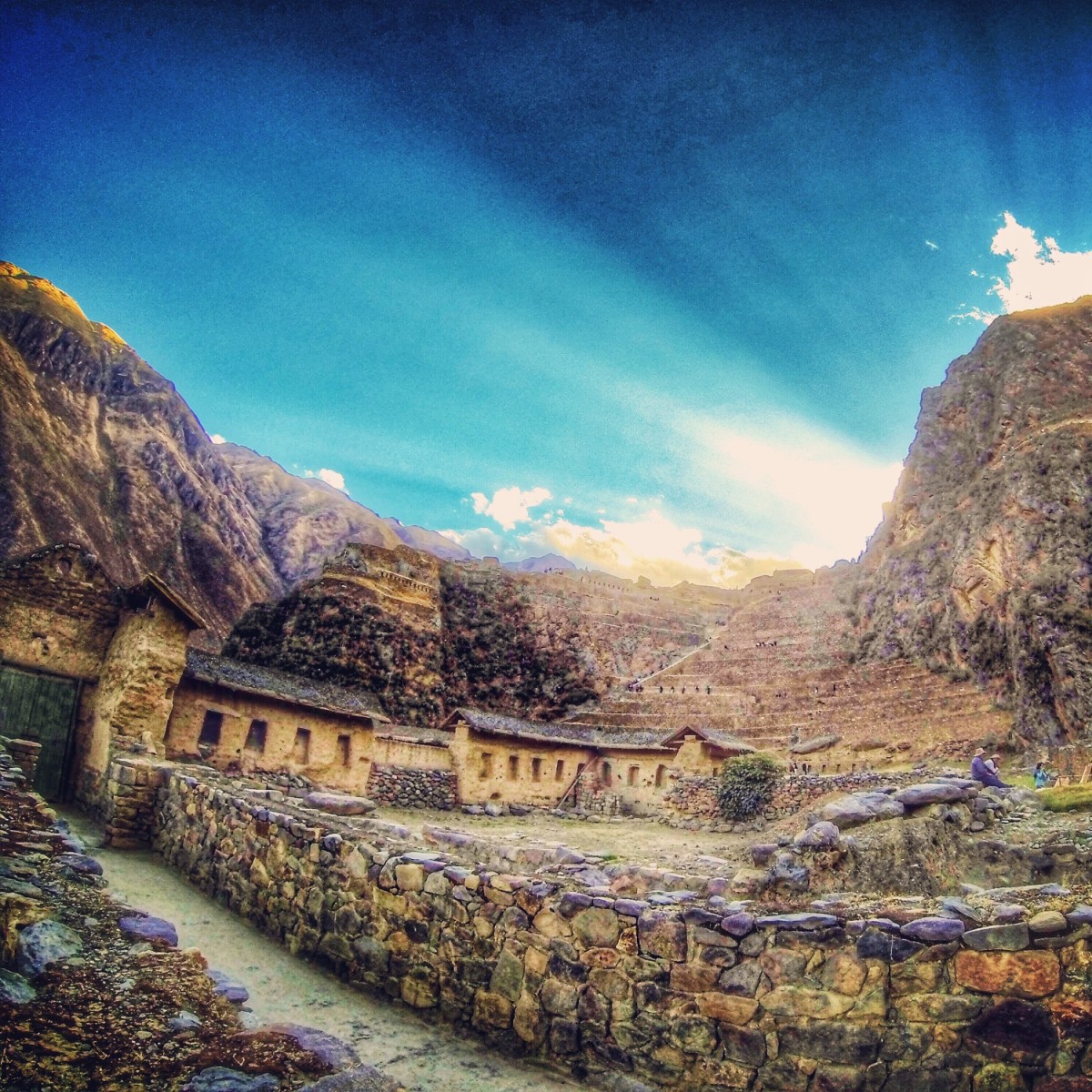 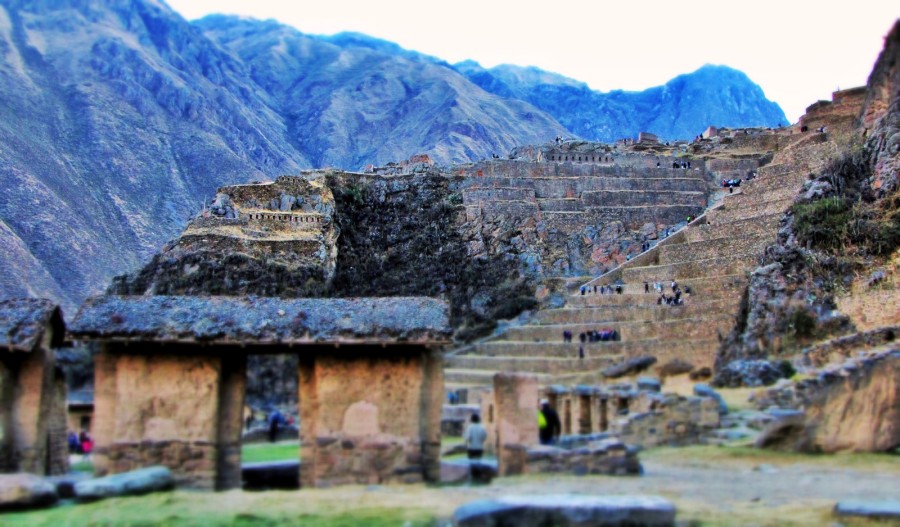 Whew! Busy Day 2!  Maras, Moray, and Ollantaytambo are all unique and amazing places!

Tomorrow, on to Aguas Calientes and Machu Picchu!