Editor’s note: I realized that I had written, but not posted, a review of the St. Regis Lhasa Resort, Tibet. Without further ado, enjoy!

The St. Regis Lhasa Resort is the first and currently the only 5-star hotel in downtown Lhasa. The architecture is well done and it oozes local Tibetan spirit in its artwork and decor. We were greeted with white Tibetan offering scarves: 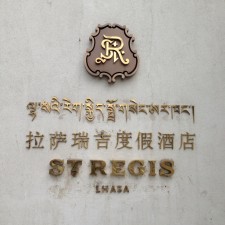 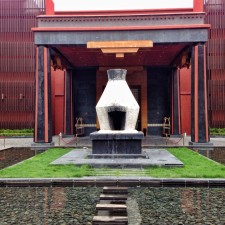 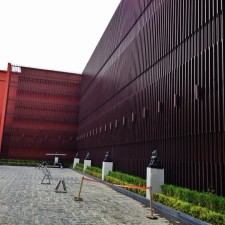 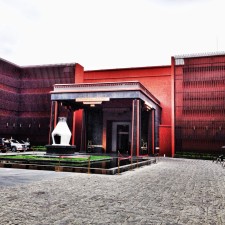 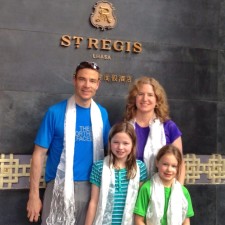 On entering the hotel lobby, the Potala Palace, which is about 1.5 miles from the hotel, can be seen through the floor to ceiling windows: 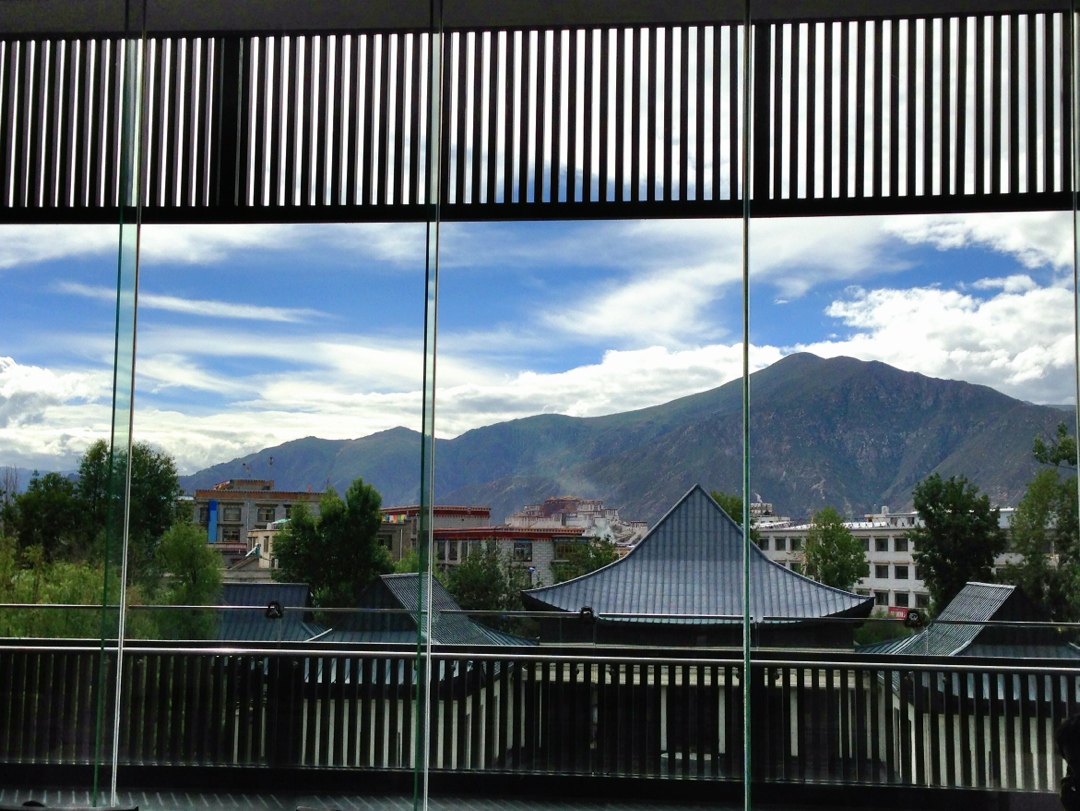 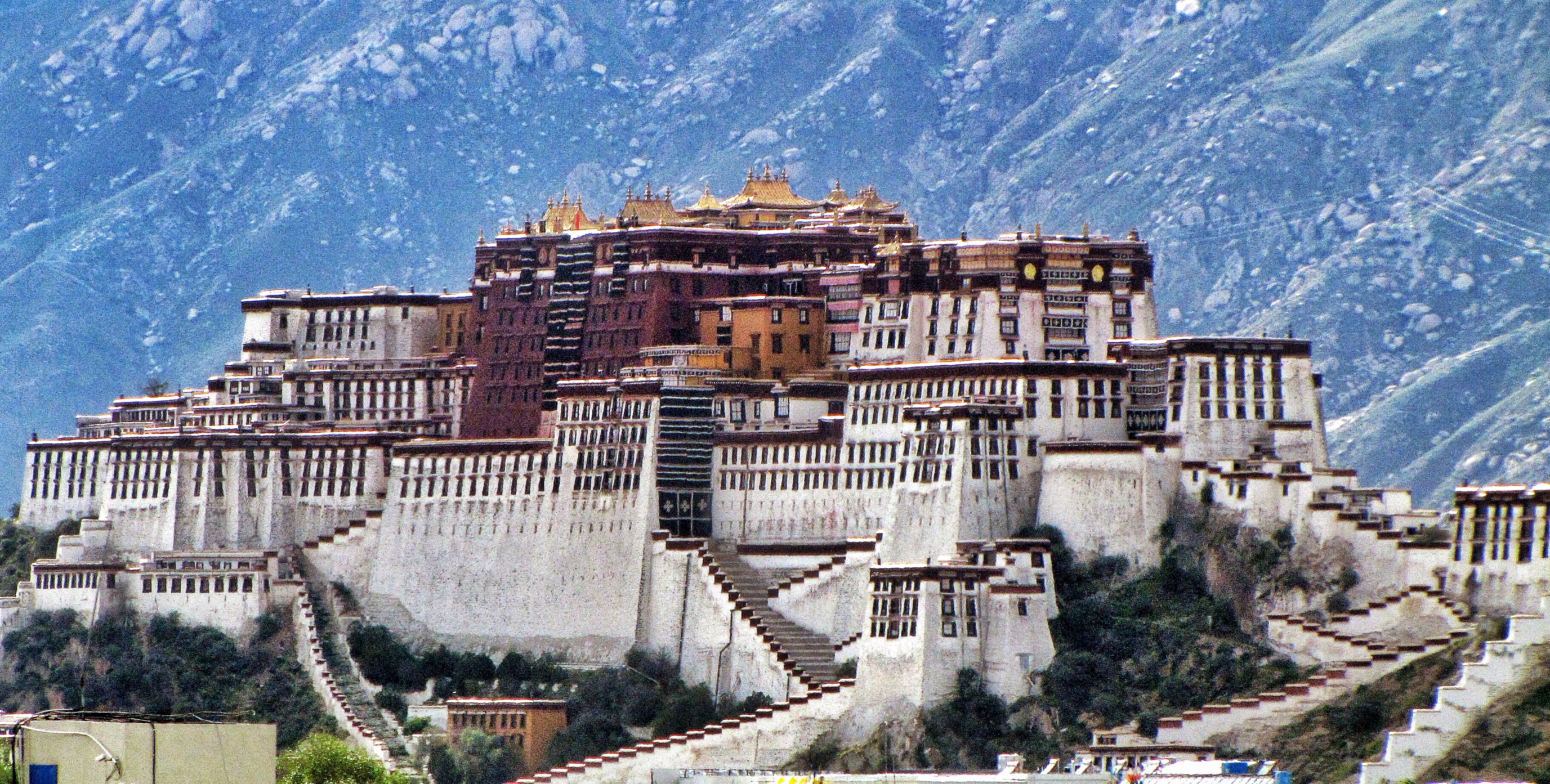 The windows of the lobby also overlook a reflecting pool and the spa which have dramatically different appearances based on the weather: 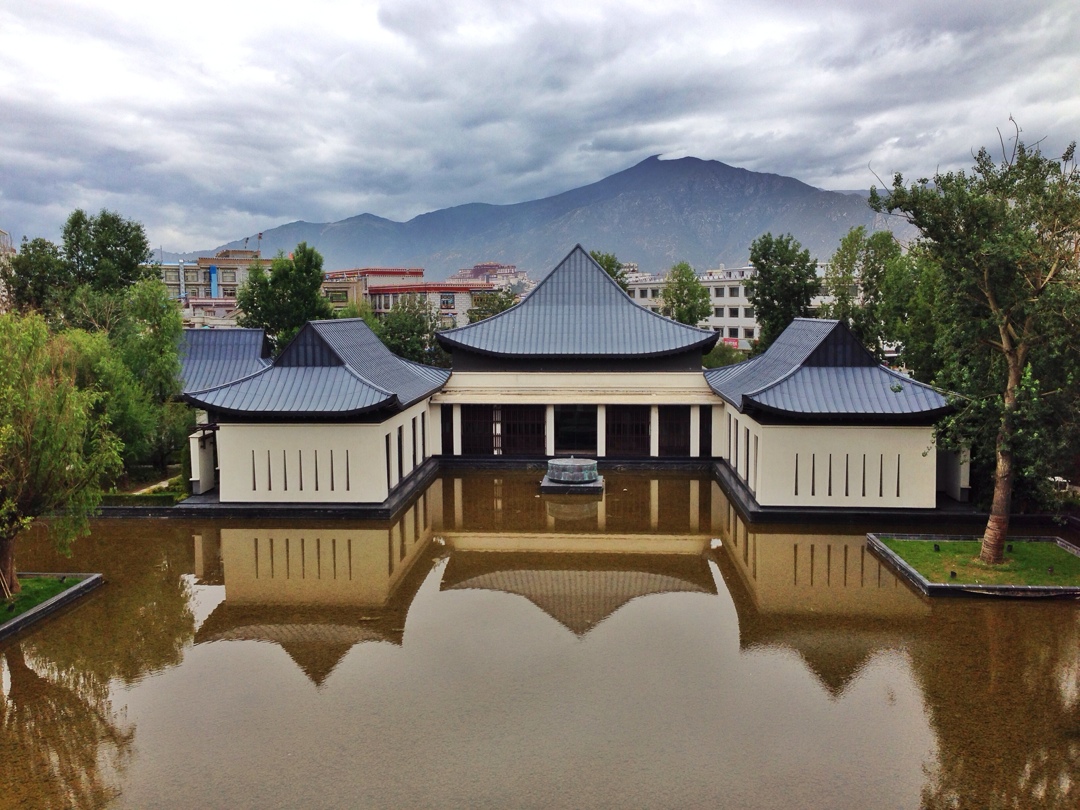 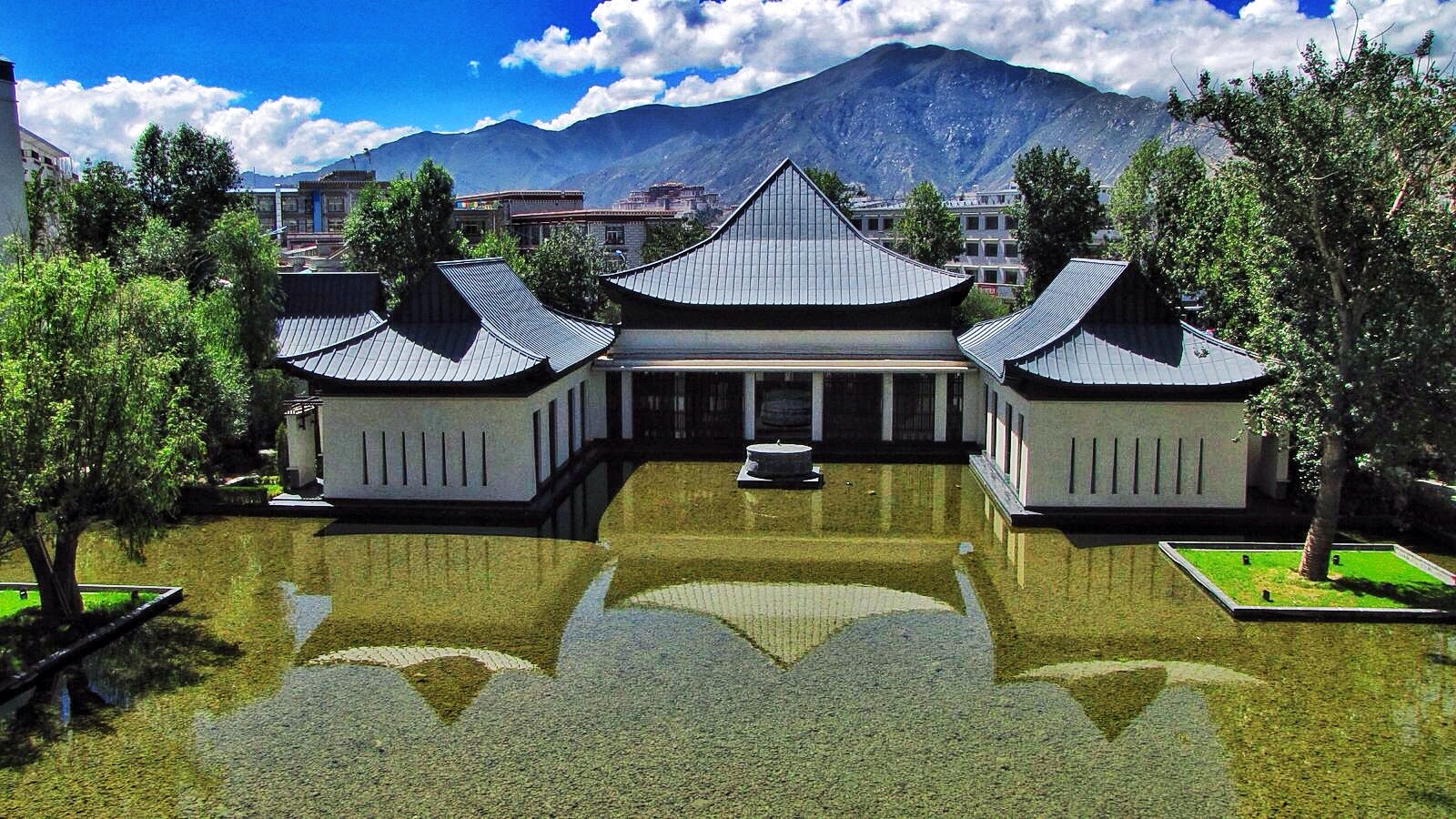 The indoor spaces of the lobby, tea room, and den are cavernous. 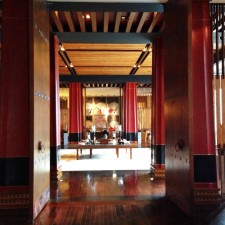 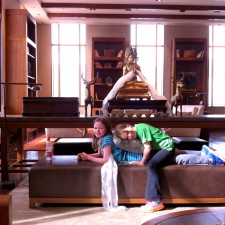 The rooms are very nice and well designed.  It featured a king size bed, office nook, and step up double-sink bathroom.  The shower and toilet areas were all covered in granite and enclosed in glass (no privacy here

).  They wheeled in an extra bed to accommodate our crew.   The bed was comfortable, but the pillows were not.  Hard and heavy, we asked for down pillows (which had been requested prior to check-in when they sent a survey shortly after making the initial hotel reservation).  They brought us 2 of the 3 requested down pillows and then started to bring us other options (they apparently ran out??).  When you’re headachy with altitude sickness, even the pillows matter. 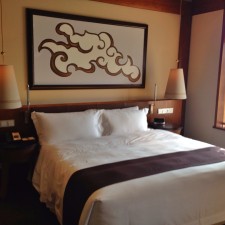 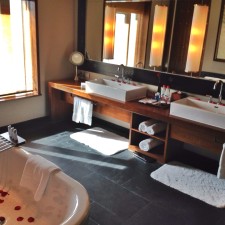 The view from our room was similar to the lobby: The Potala Palace.
By day: 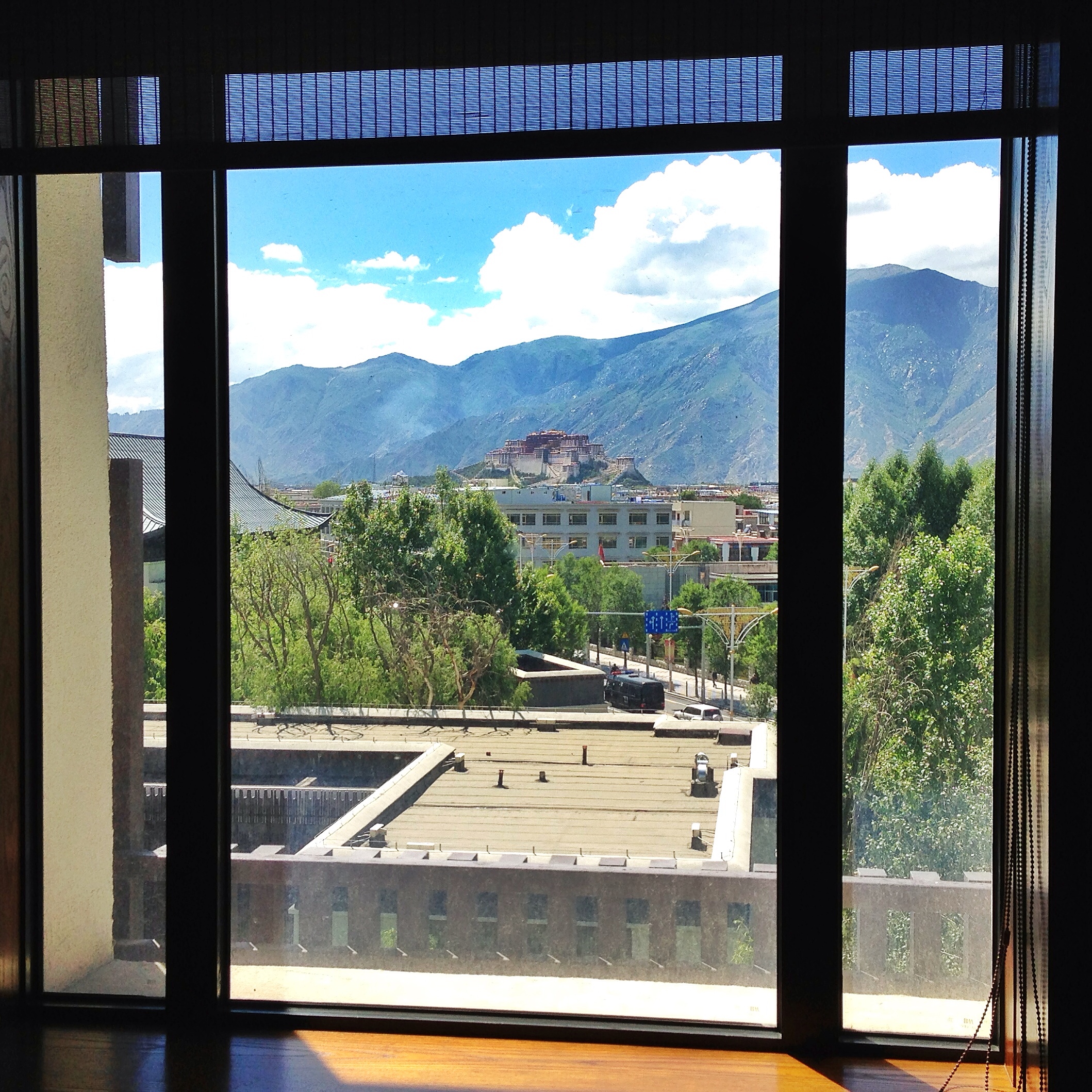 The relaxing pool at the Iridium Spa is a dazzling 30 feet by 30 feet oasis of gold tiles that glows a greenish gold. 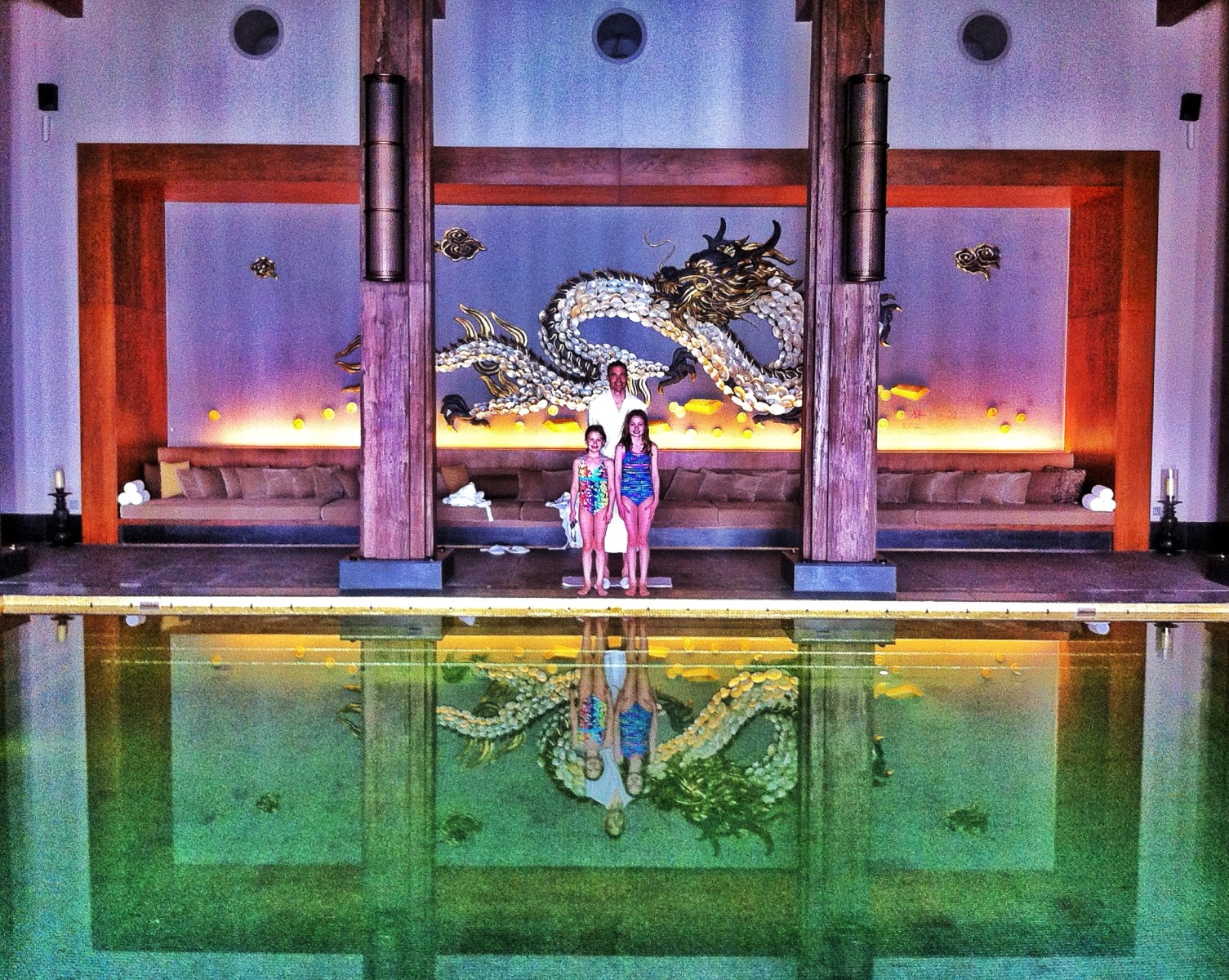 This is truly a pool of gold: 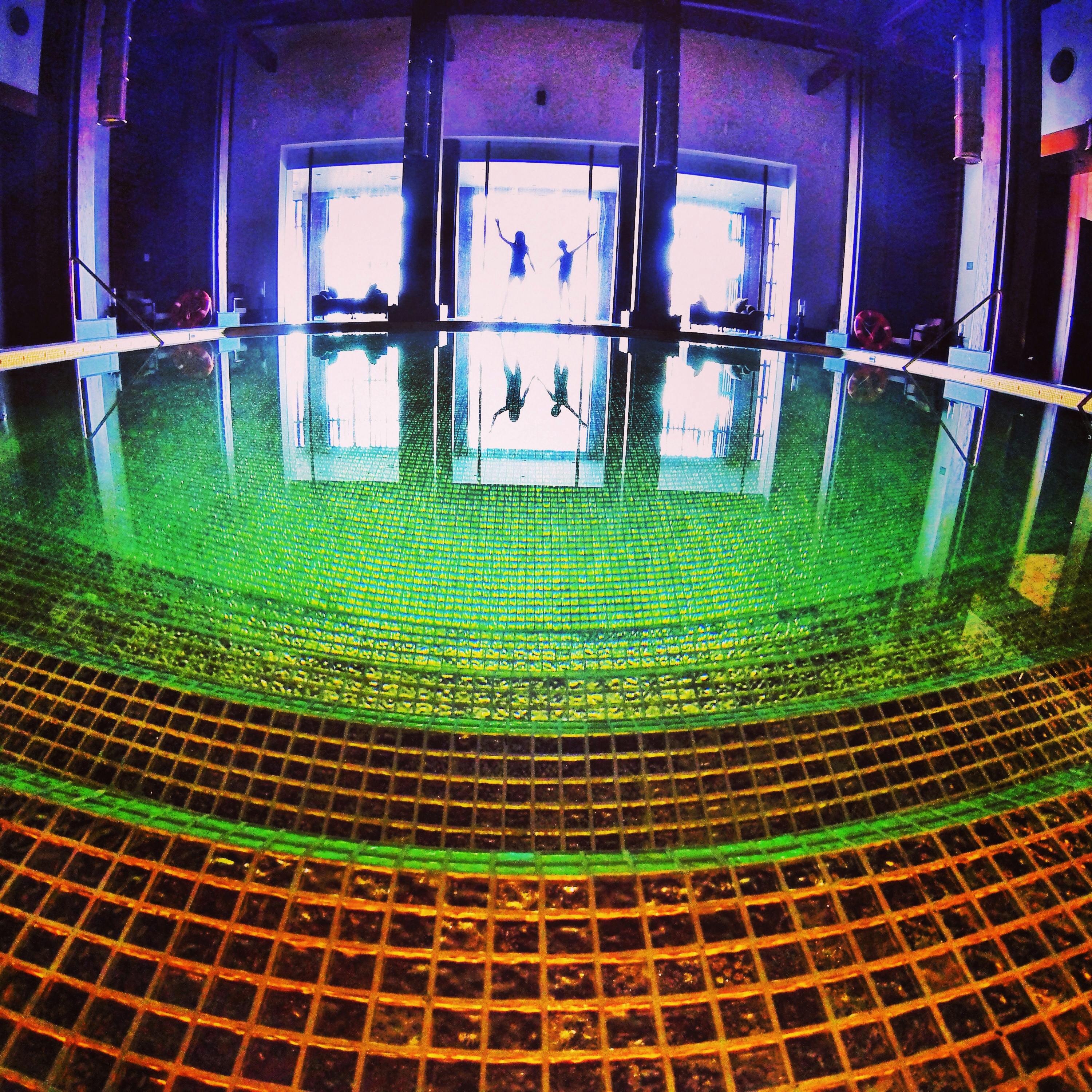 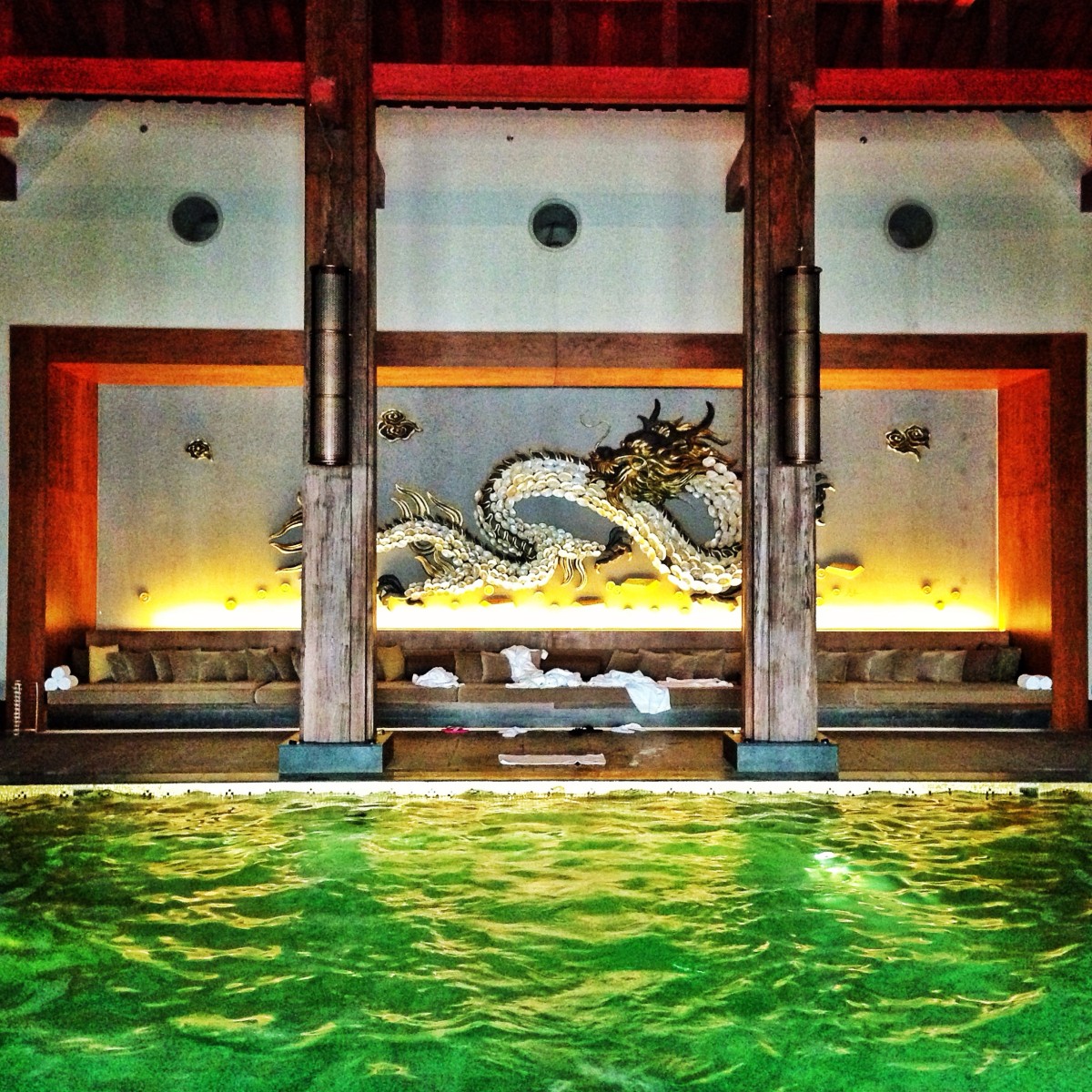 The dragon, made of shells, protects the gold bars and coins: 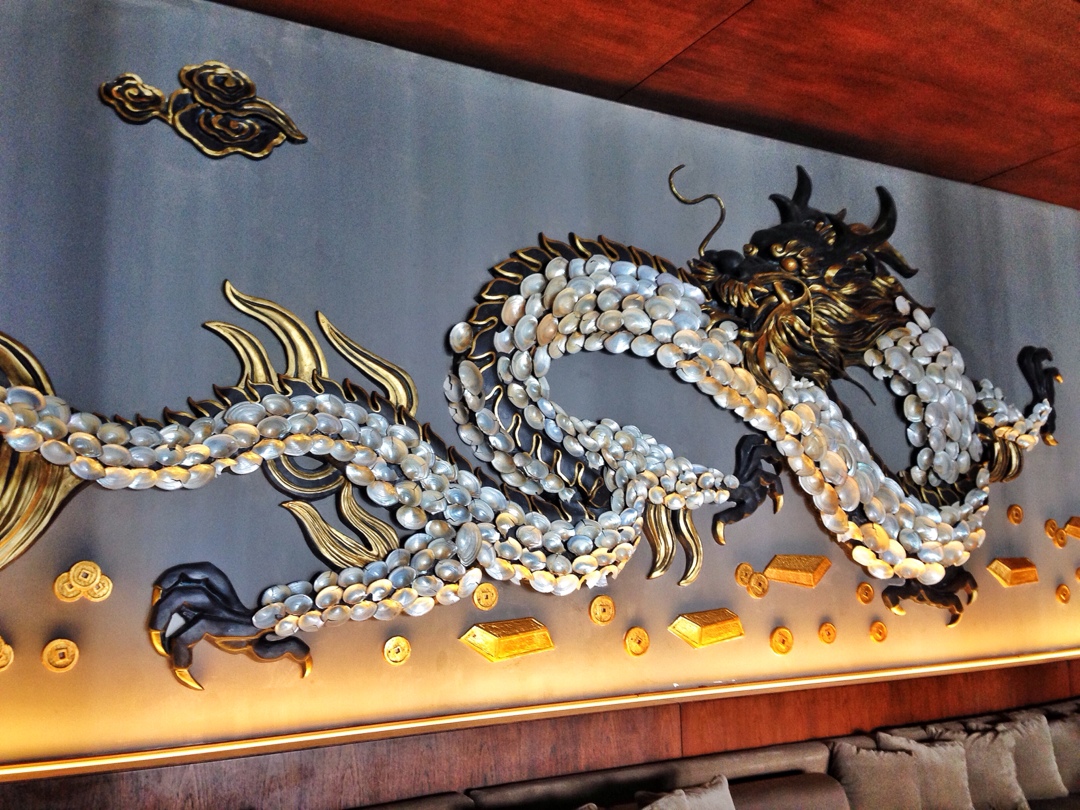 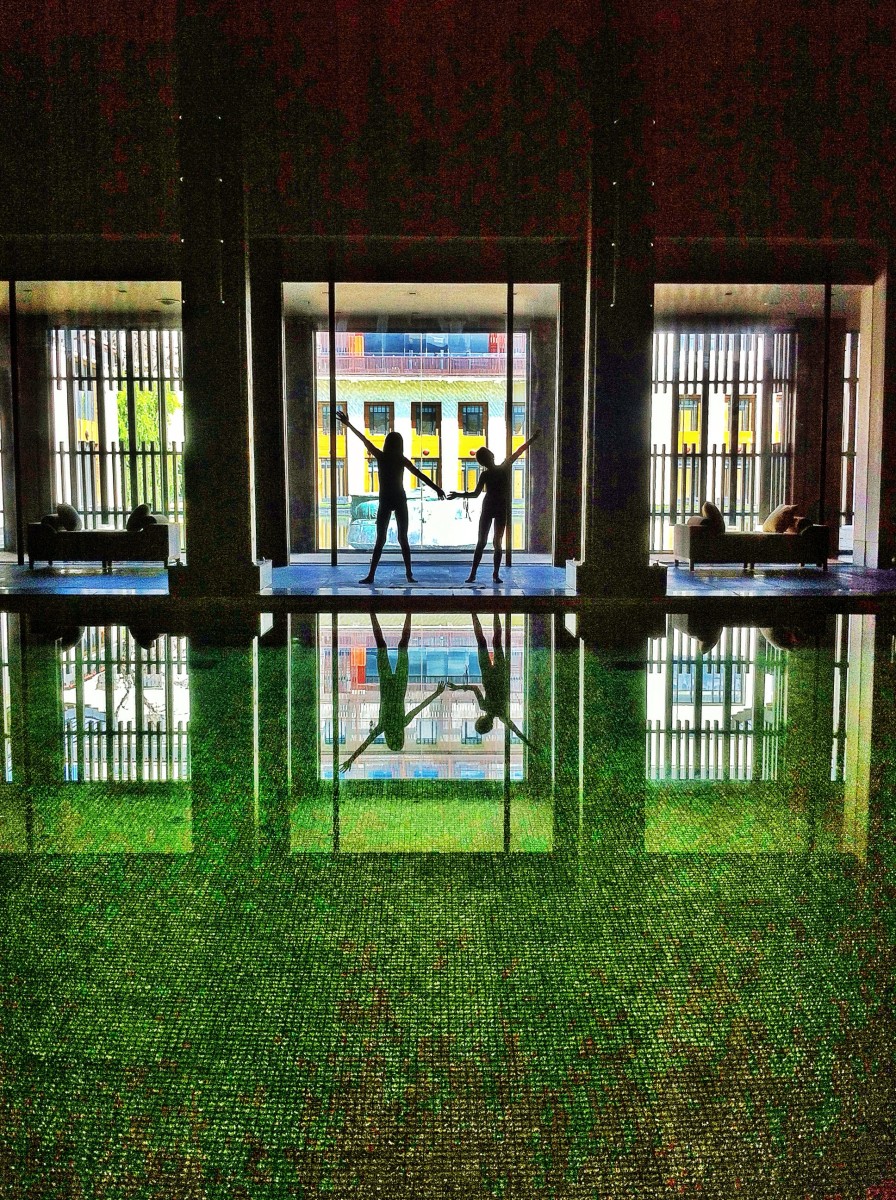 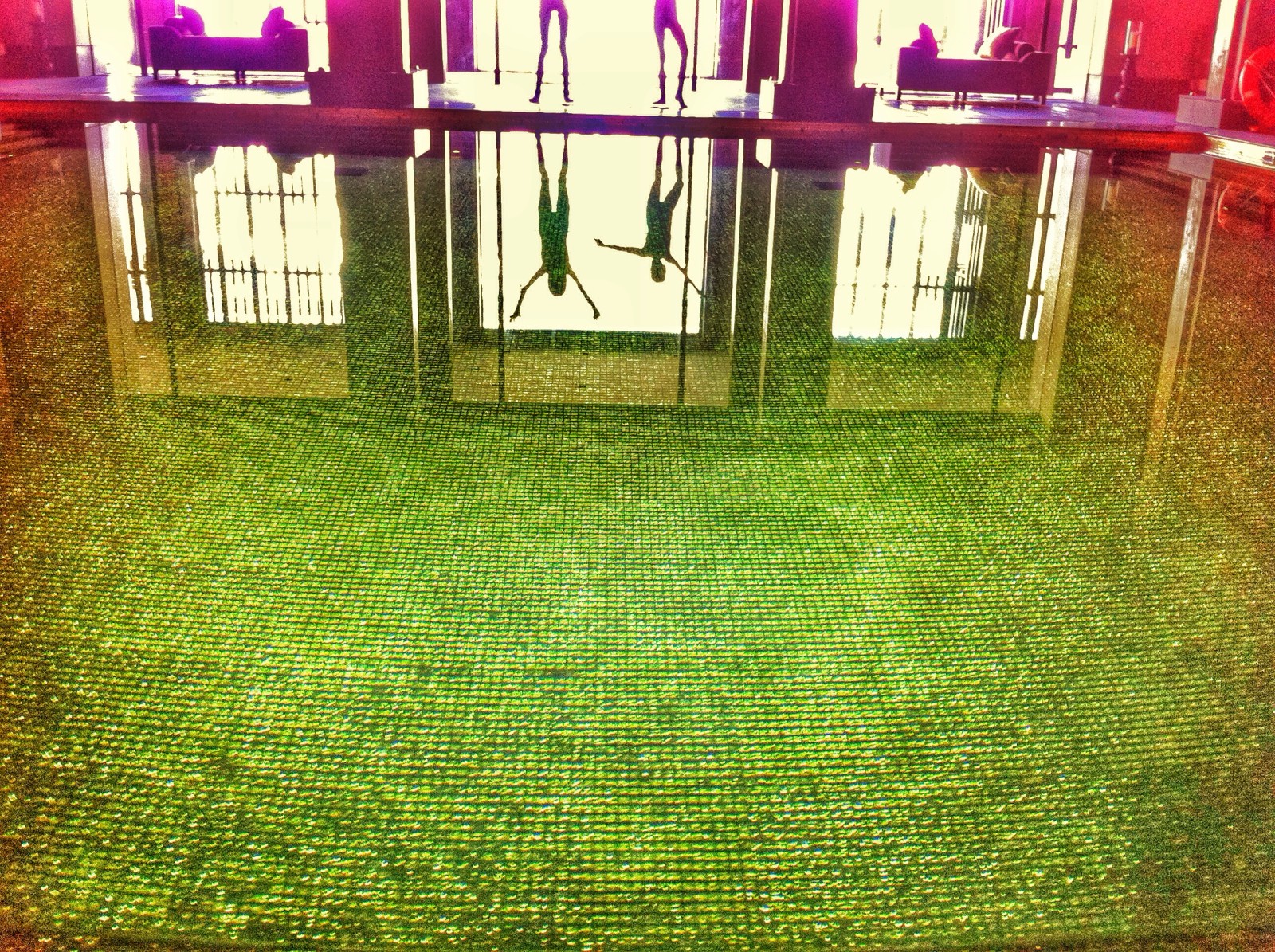 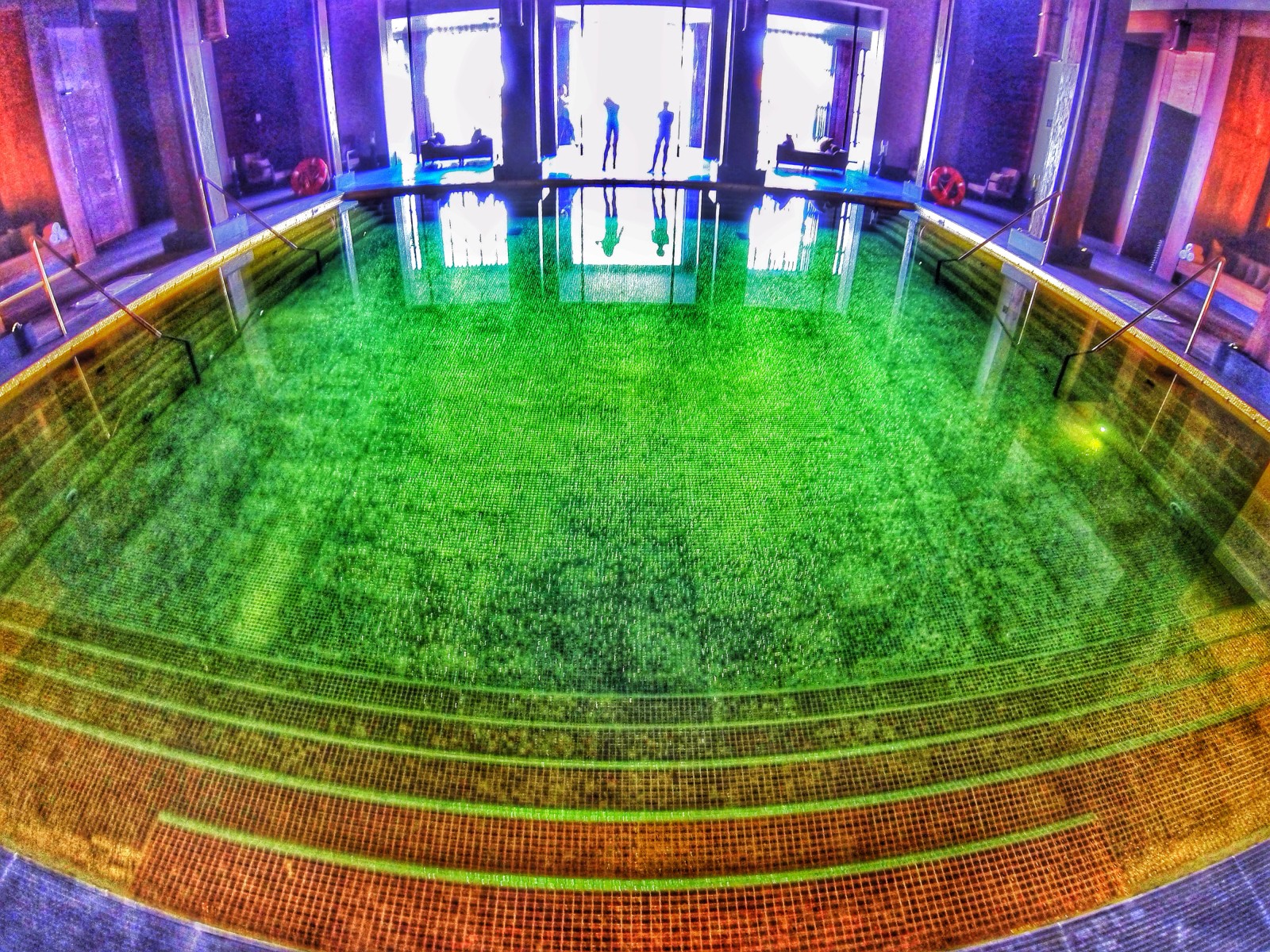 From the lobby, it’s down an elevator and a 5 minute walk outside.  From an architectural design standpoint, it makes sense why they put the spa at the opposite end of the reflecting pool, but practically speaking, it’s a bit of walk and tricky in the in-room slippers across the granite steps. 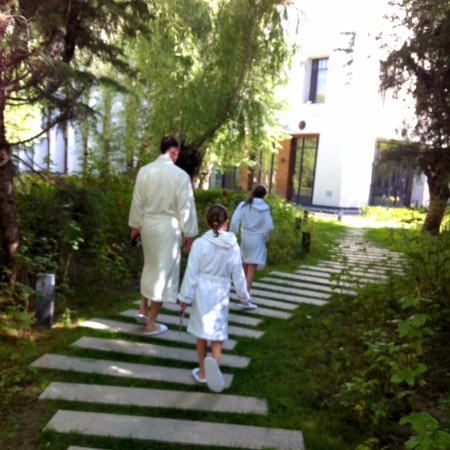 We visited the pool at the Iridium Spa on our first day.  Posted signs state that the temperature of this relaxing pool is kept between 28 and 32 C.  It was probably closer to 25C at the center of the pool.  The heaters are around the perimeter (which is also where they measure the temperature), so the staff thought that they were in-spec.  We asked them to re-measure and turn up the heat which they quickly responded to.   We visited the pool again 2 days later and the pool was a very relaxing 32C (or more).

The view of the reflecting pool back towards the lobby was also a nice sight: 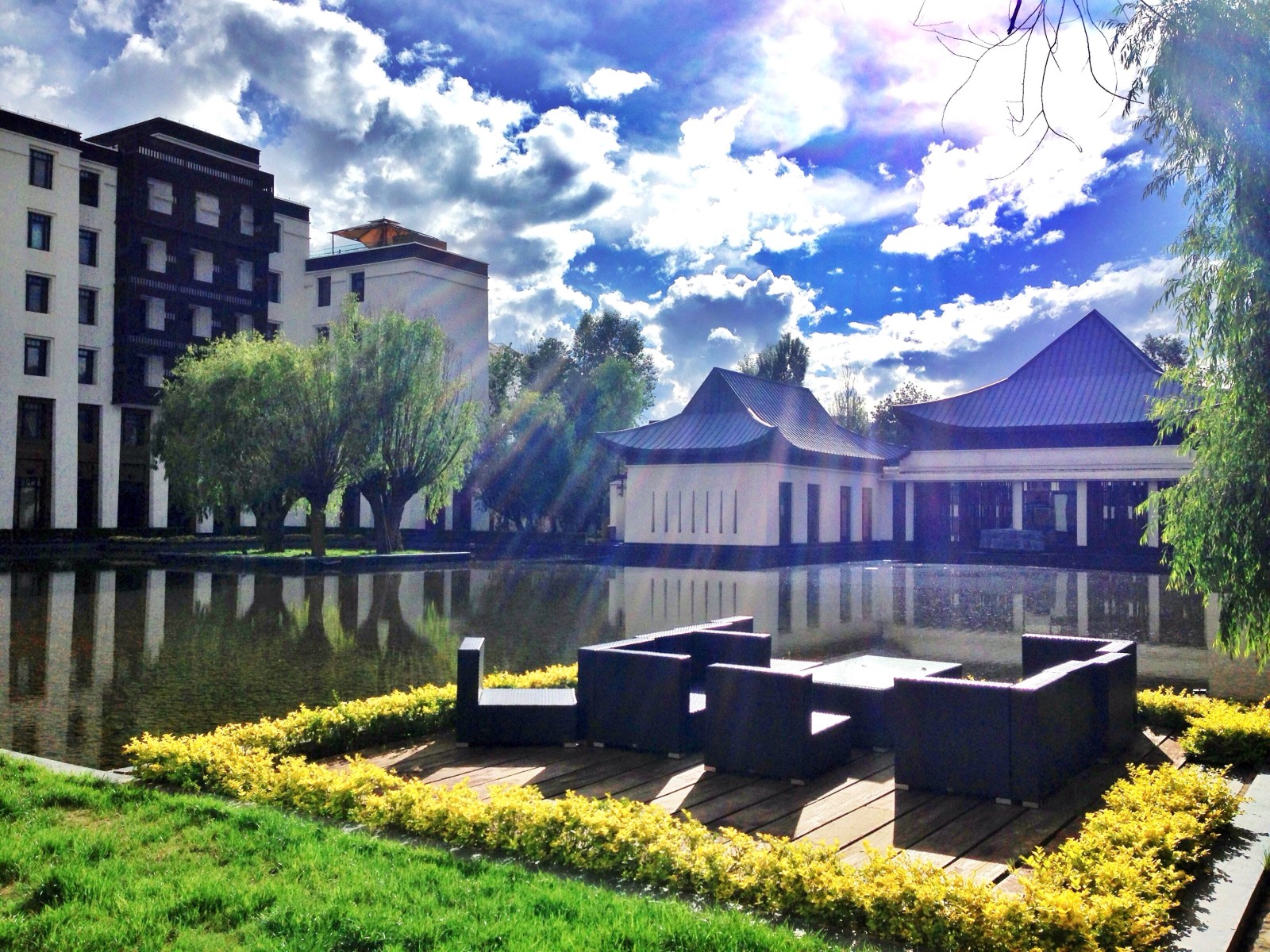 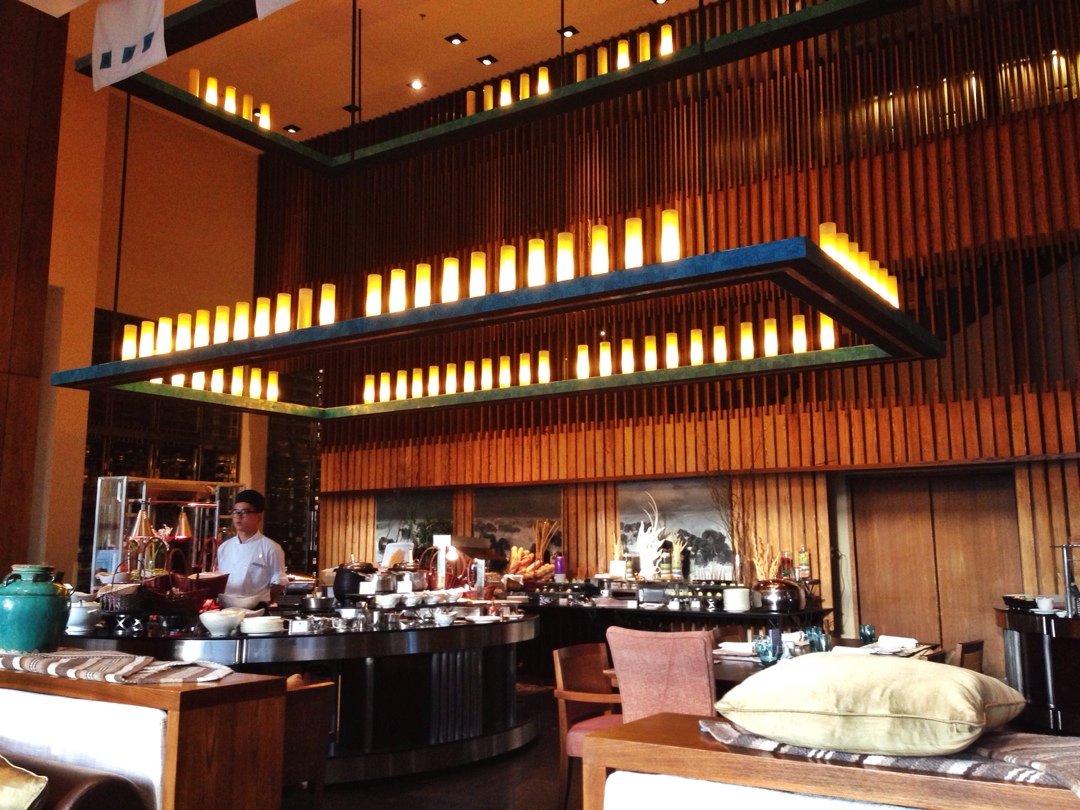 The St. Regis Lhasa Resort is a beautifully designed hotel. It’s an amazing hotel from an architectural point of view, but it was quite empty.  There wasn’t anyone playing a piano or bustling crowds like we saw in Chengdu at the Shangri-La.  This is a 5-star resort in Lhasa – a little out of place, and a little too expensive for most of the Lhasa visitors.  The cold pool and somewhat slow meal service (both of which were remedied by the staff) are indications that we were visiting in the off-season, they don’t have many visitors, or have never been full. If the Trip Advisor reviews of the other hotels in Lhasa give you pause, then stay here. It’s nice, safe, quiet, and a very relaxing santuary from the hustle and bustle and incense of Lhasa.