After an early-ish bedtime (8PM) and some jet lag to help, we woke up über-early and left the hotel by 3:30AM (!) to visit the Tsujiki Fish Market auction. We took a short cab ride through the quiet pre-dawn (pre-anybody who is sane enough not to wake up at 3) Tokyo streets. 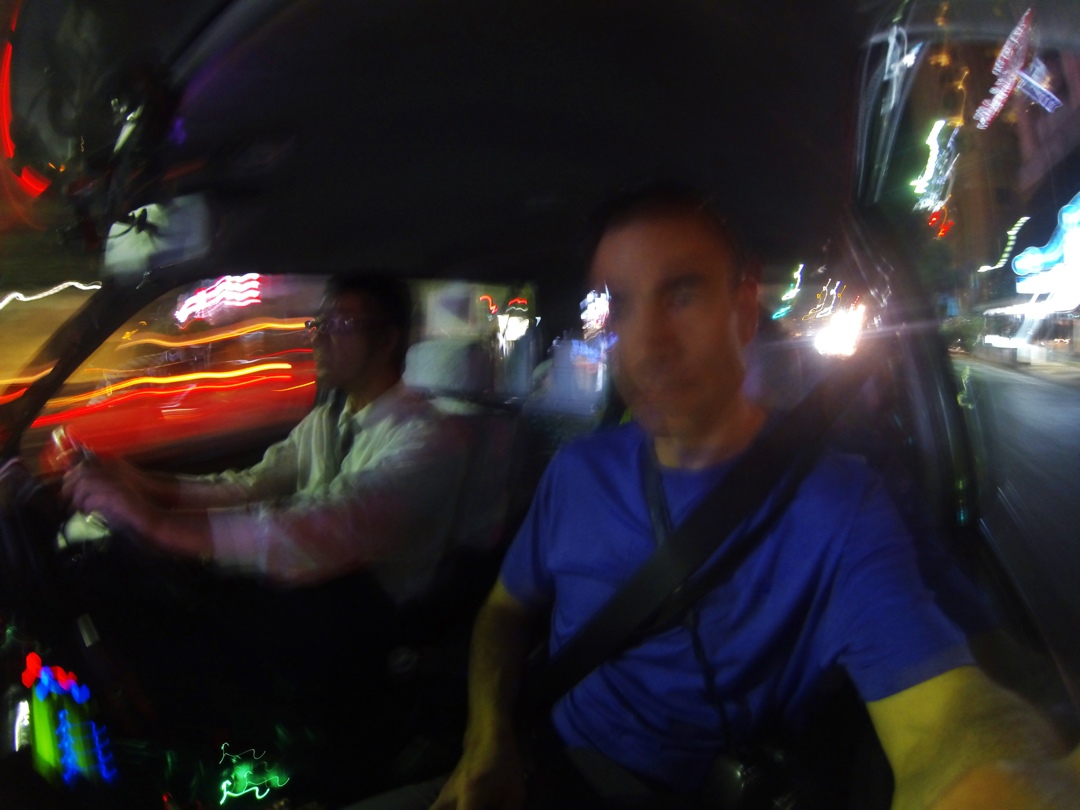 The market limits how many people can visit the auction to 120 people, separated into 2 groups of 60, first-come, first-served. By the time our taxi dropped us off, there was a line already forming. After a few minutes, we were ushered into a room and issued mesh green vests – first group, a sea of green vests and multi-lingual discussions. 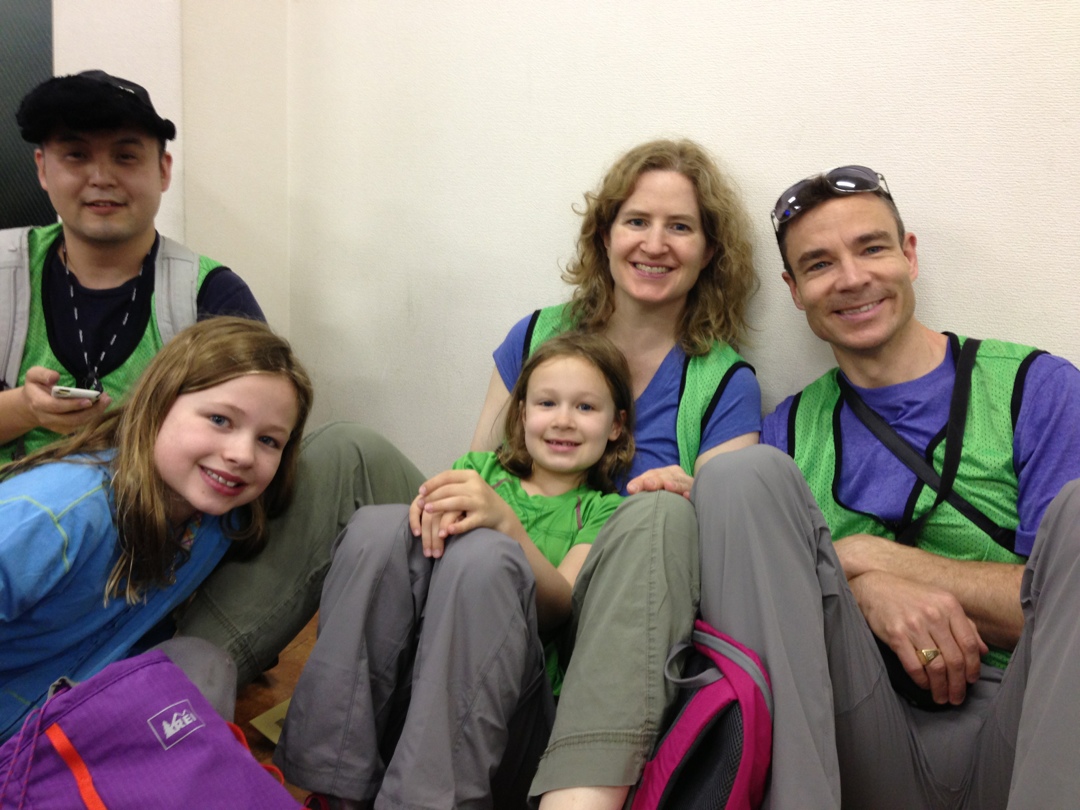 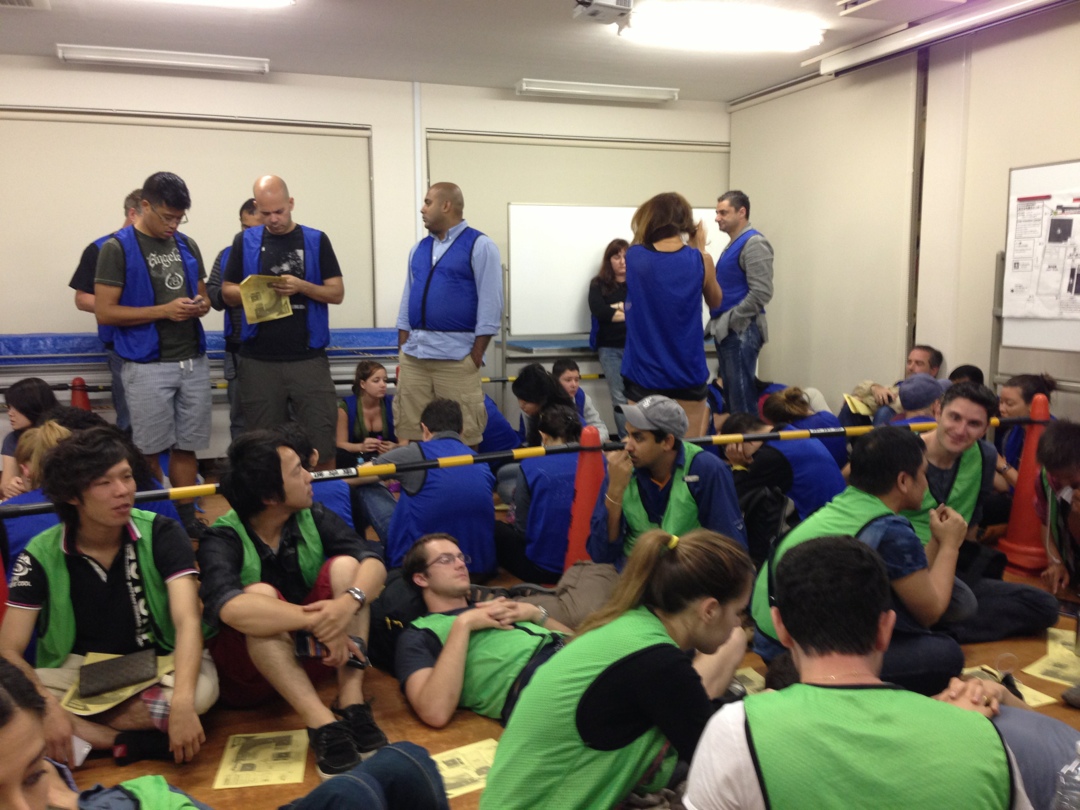 Then we waited… When you have a couple hours to kill in close confinement, you chat with the video blogger from Japan with the custom built hat-cam or the trio of Kiwi travelers. The video blogger’s hat resembled a Goofy hat from Disneyland with its oversized brim. 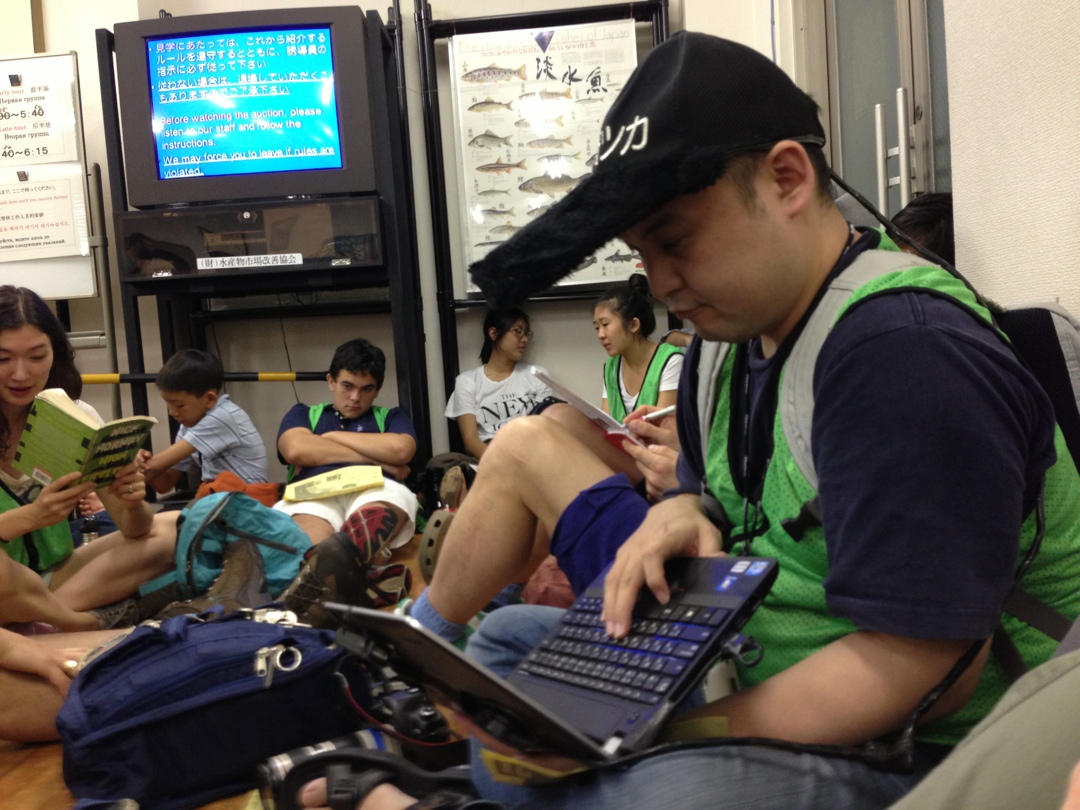 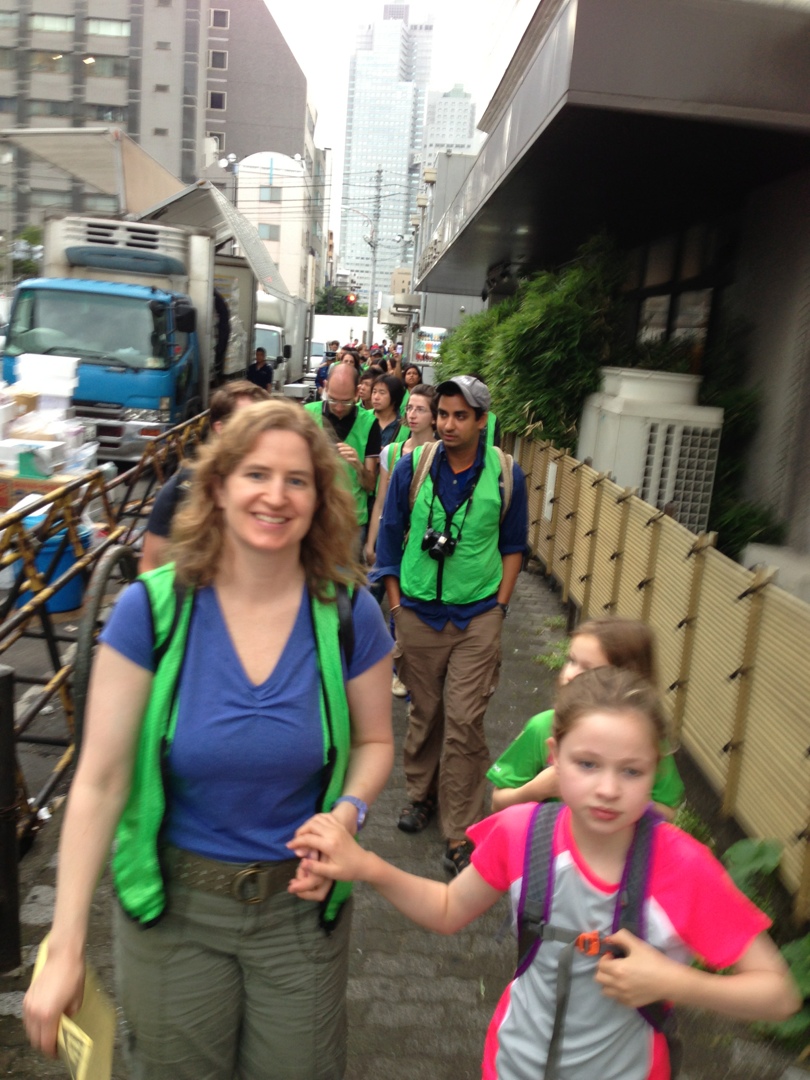 The Fish Market is a busy place at 5:25 in the morning. Hundreds of people are racing around on Mighty Cars –3-wheeled and 1-wheel-drive (and steered) flat-bed electric carts — unloading and loading fresh and frozen fish from around the world. It’s amazing that nobody gets runover by these guys. They drive fast and weave in and out. 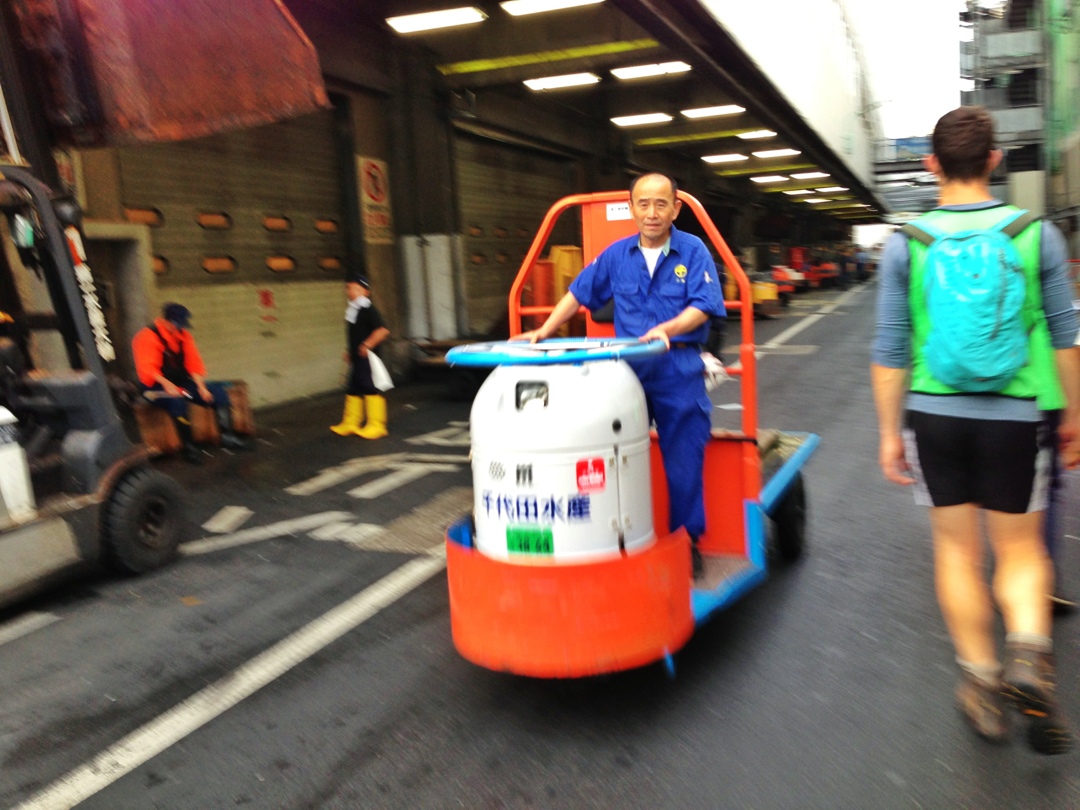 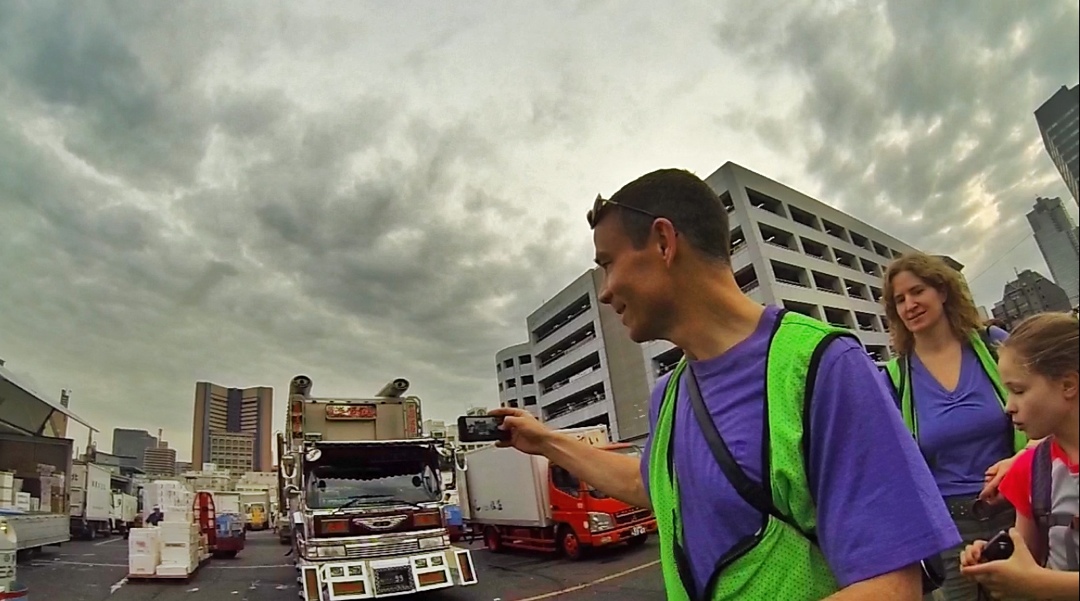 Tuna arrives flash frozen at a cool -60C degrees off ships from from Japan, China, Thailand, and sometimes South Africa which yield tuna monsters of 300kg!  The auctions are a cacophony of bell-ringing and auctioneering, selling the fish row by row. But before the bell rings, prospective buyers inspect the fish by lifting flaps of flesh near the tail, looking for subtle texture and color variations that make for good sushi.

The fish have yellow labels on their heads that denote the country (or ship) of origin and the weight in kilograms. 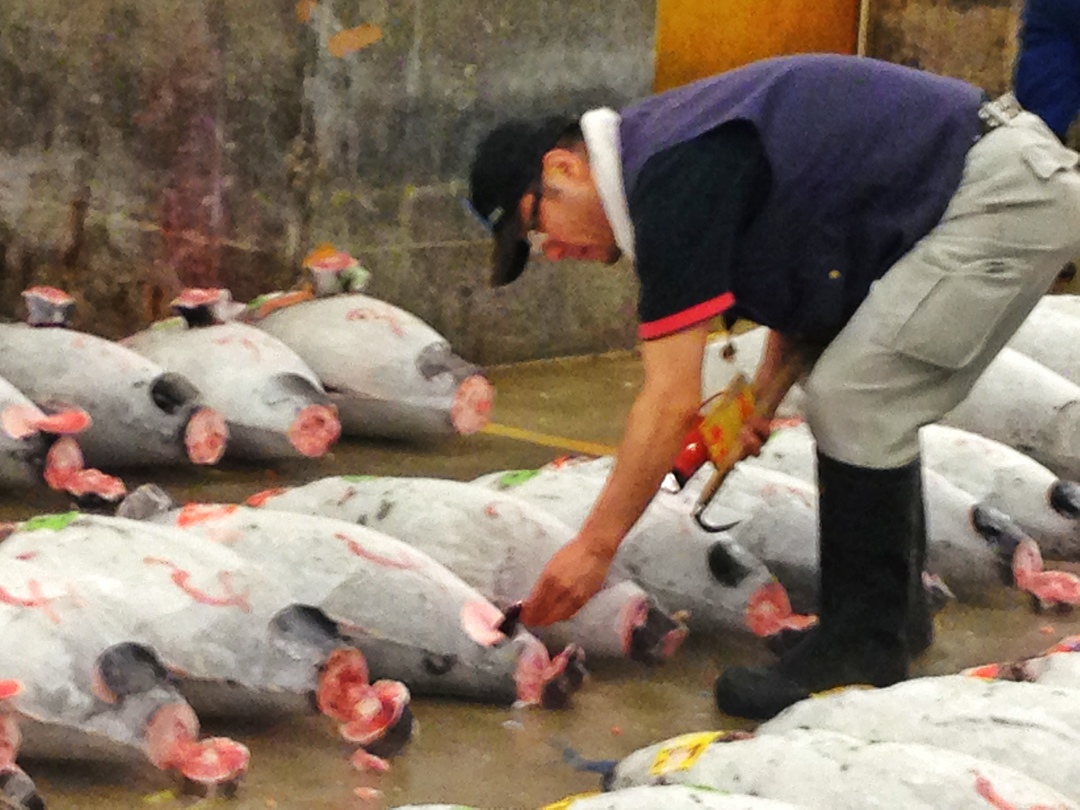 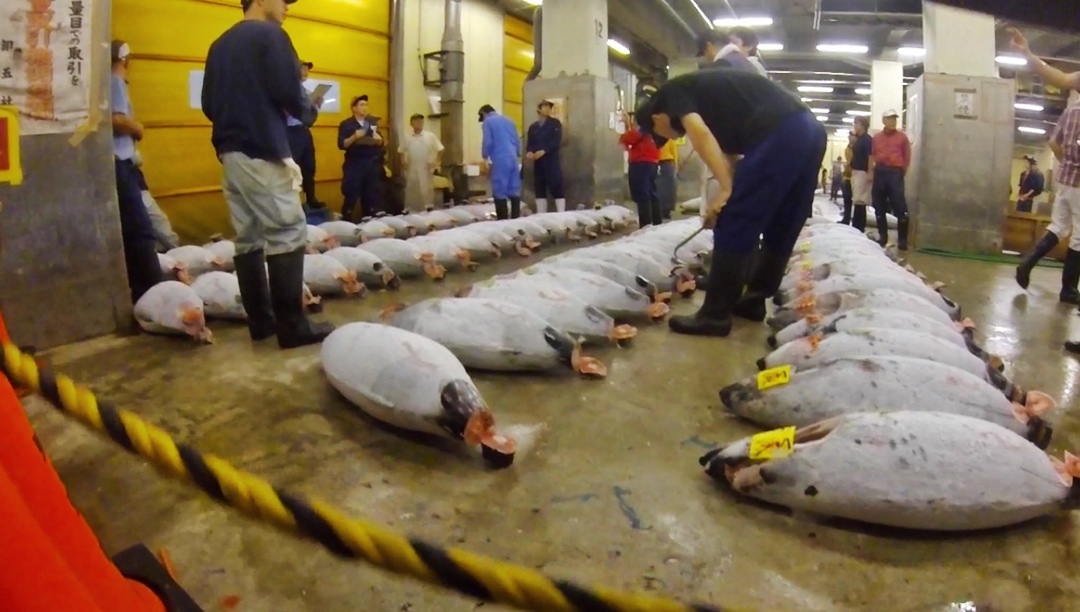 The actual auction is done row by row with the auctioneer doing what auctioneers do. He stands on a small stool and shouts while another guy writes down the winning bids. 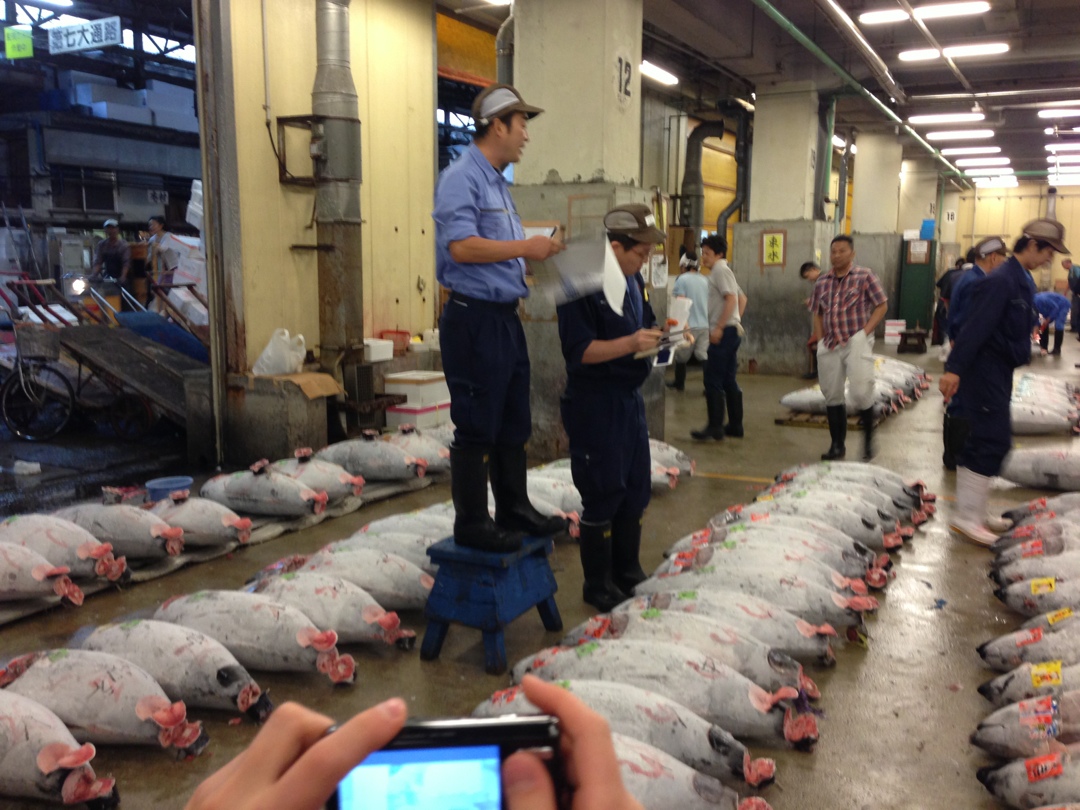 One of the buyers came over and started talking to the girls. He was very friendly and answered any questions we had regarding how the tuna was rated, how much it cost, and how large the fish get. 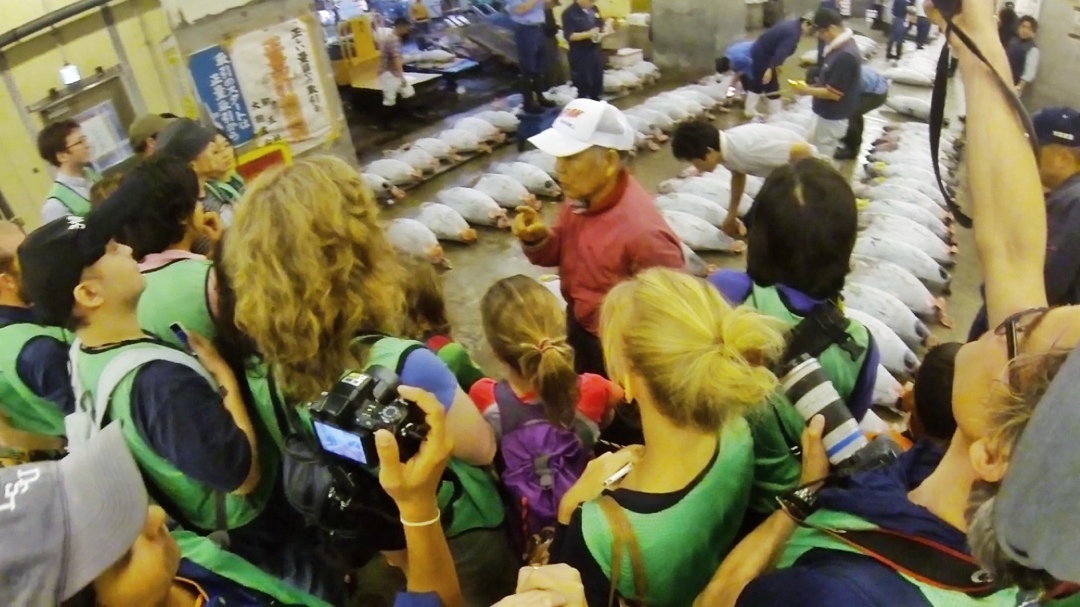 He walked away to buy more fish, but returned a short while later with a Fish Market auction hat for the girls to try on for a photo-op. 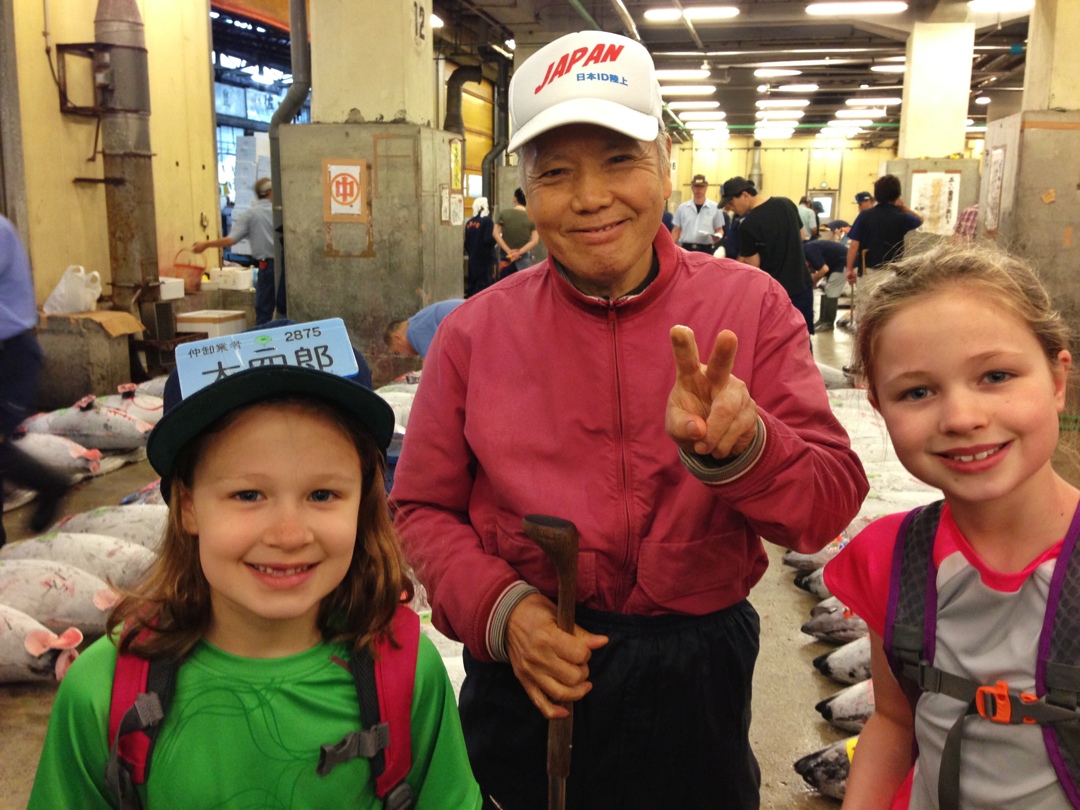 The Friendly Buyer with Hat

After 25 minutes in the auction, we were escorted out. Beyond the auction is a massive wholesale market. One of the guidebooks said that over 2,000 tons of seafood passes through here each day. 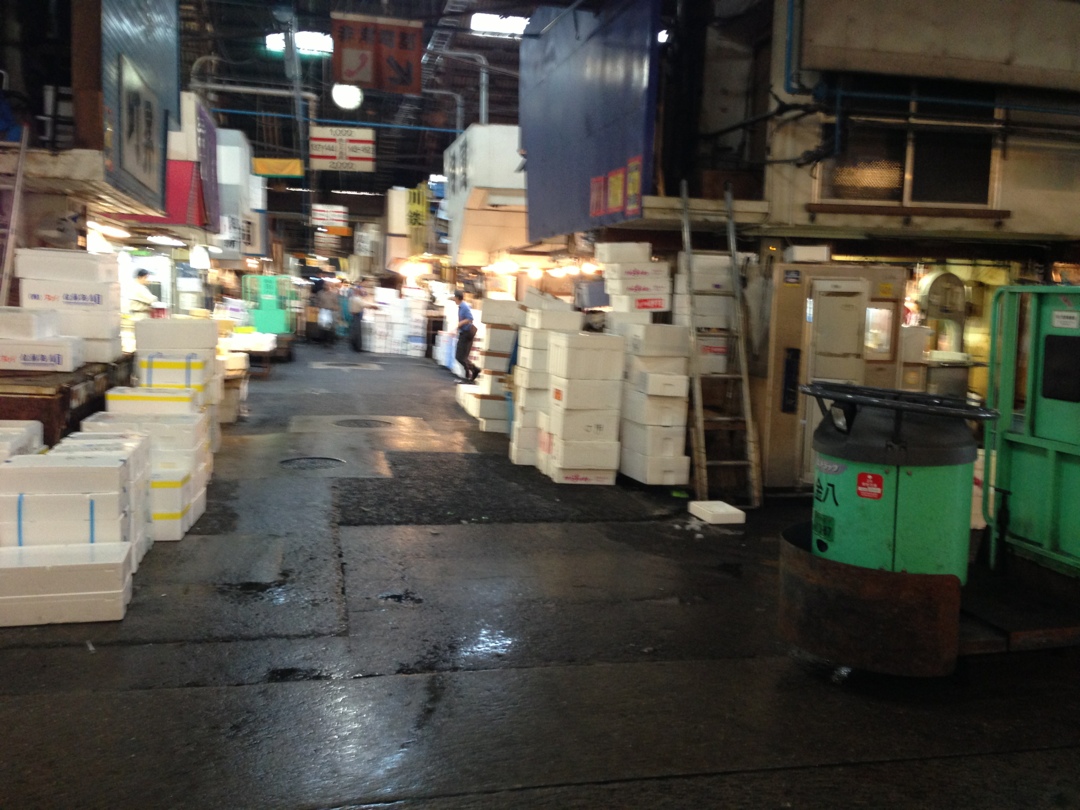 Outside the Fish Market was a mountain of styrofoam containers used to ship sea-borne products to it. Some were picking through the containers to reuse or recycle. 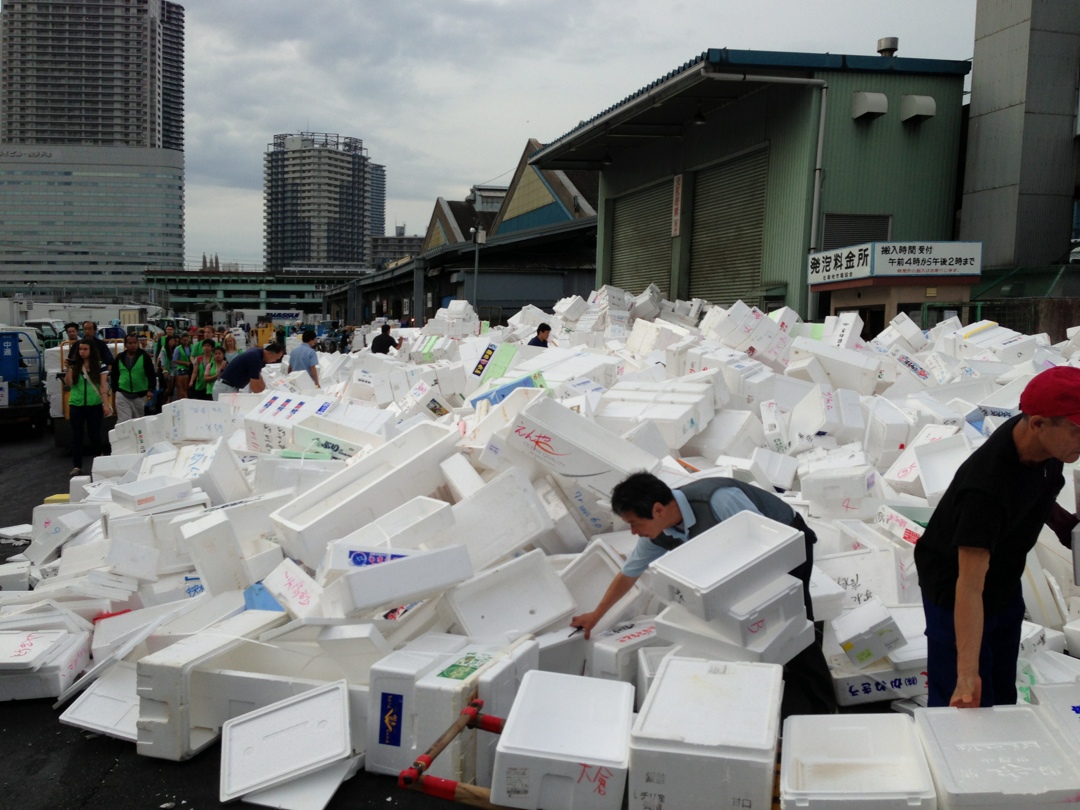 All in all, it was a great experience and a great use of jet-lag. And even better, we were done by 6 – just in time to go back to our hotel and have breakfast. Three hours later, we would start our Tokyo tour at 9:30.