We were met at the airport by our guide, Lily, and our driver, Mr. Chow. Lily has been a guide for about 8 years, previously working for an Australian tour company before setting up her own business.

Xi’An’s ancient city wall dates back 600 years ago. It’s 14km around and you can walk or bike or ride a cart around it. 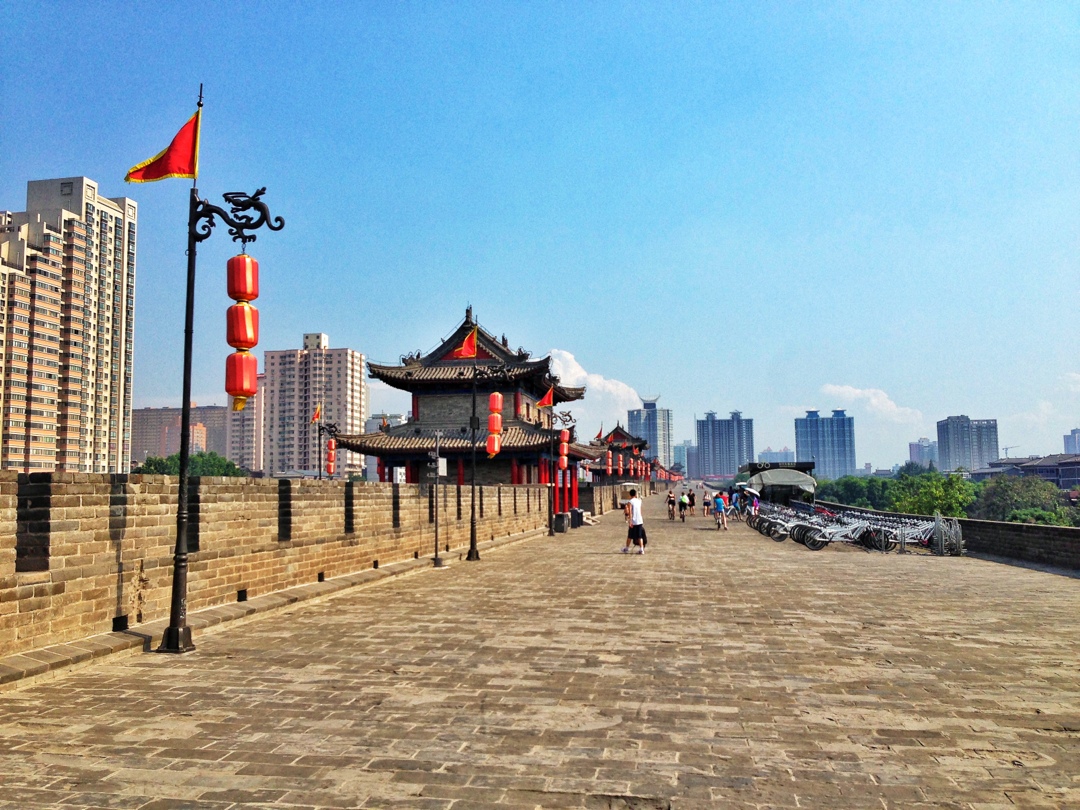 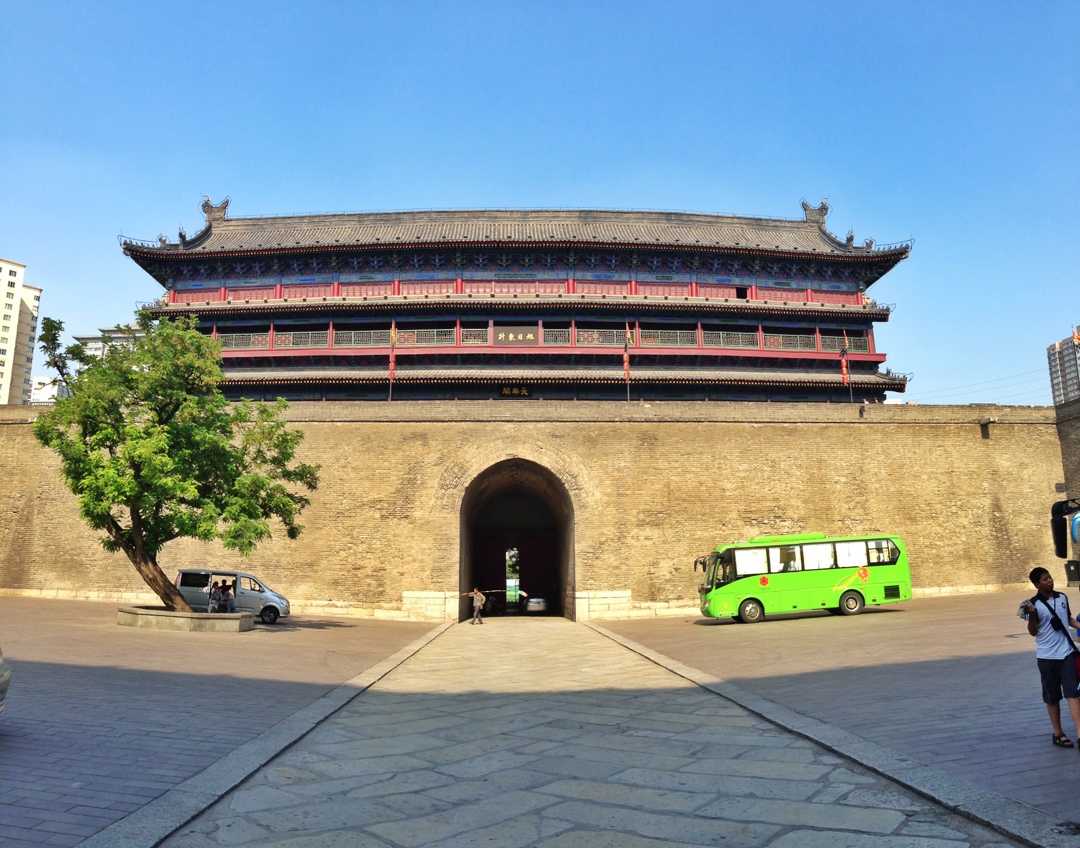 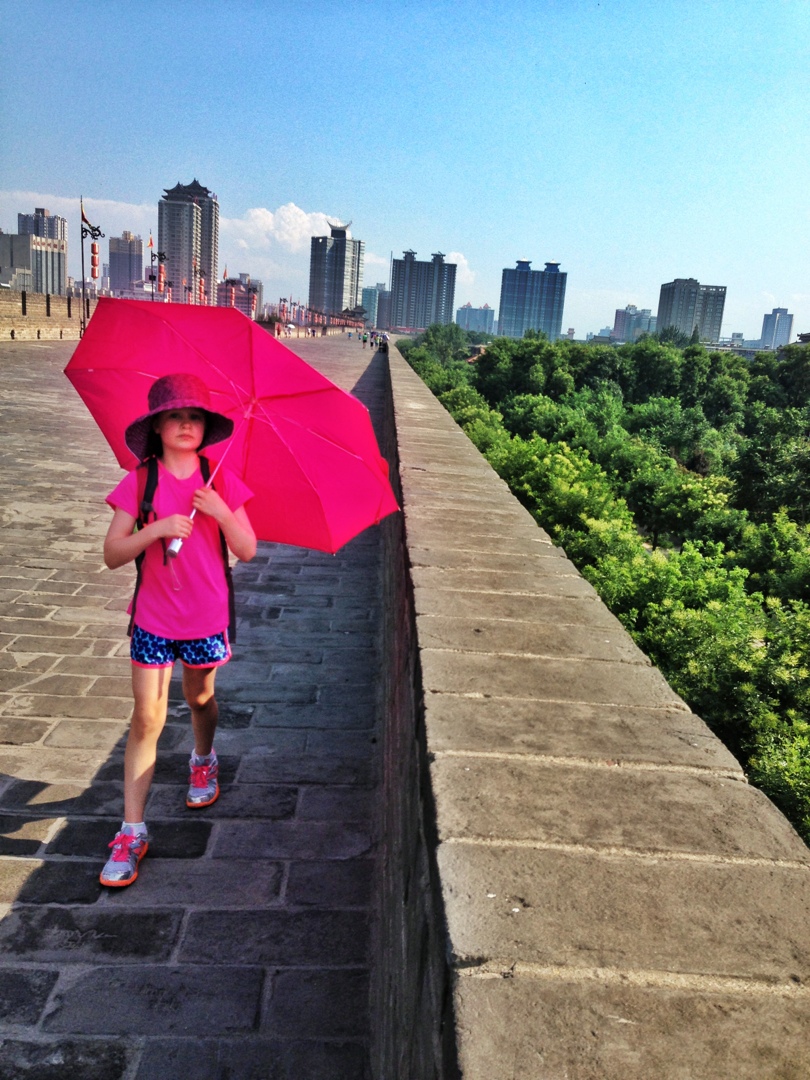 Nearby is the Muslim district, a street filled with vendors selling everything from naan to noodles and roasted walnuts to peanut candy. 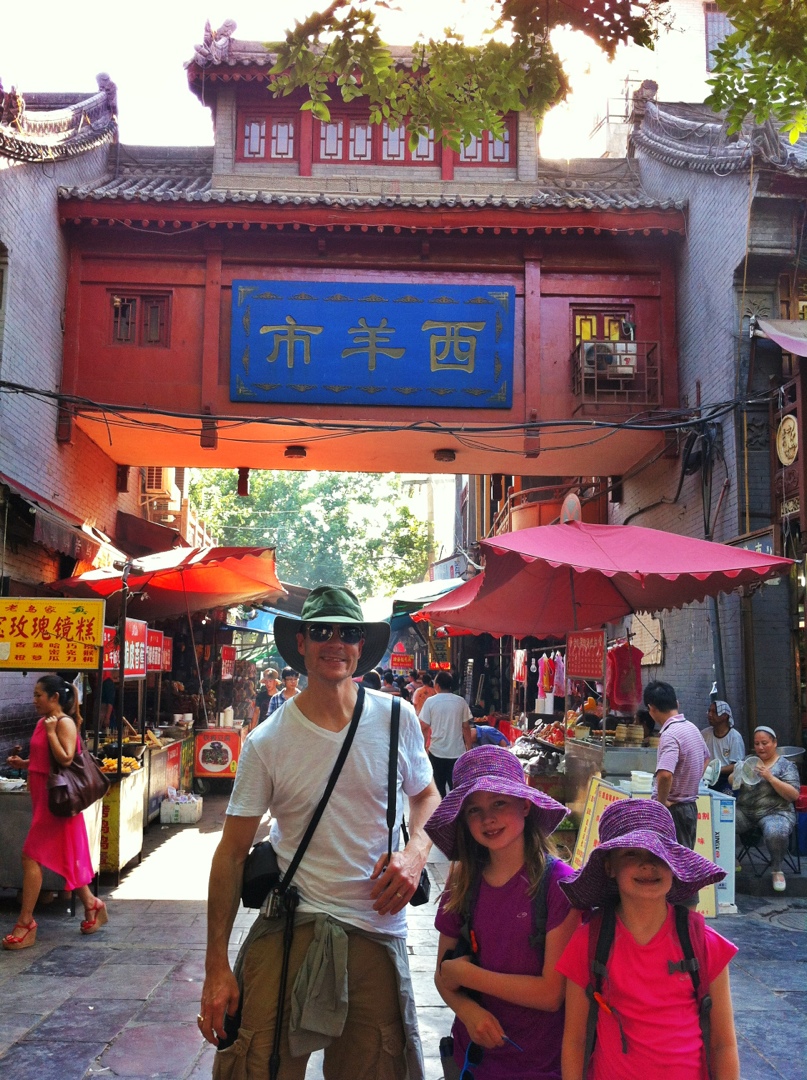 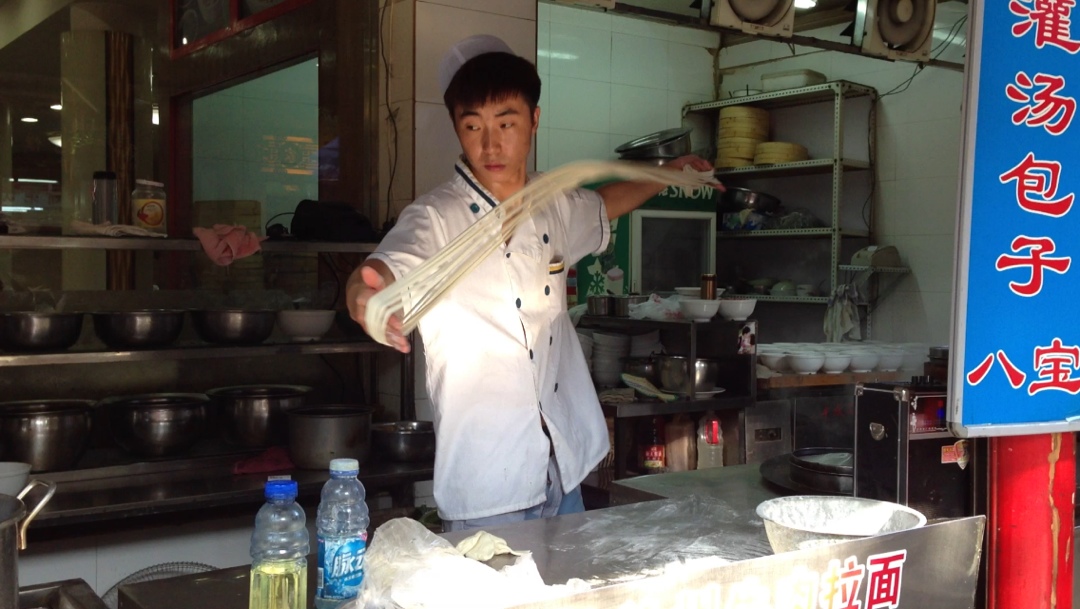 Lily took us to an authentic neighborhood noodle restaurant. Many at the restaurant had probably never seen a Westerner, so there were giggles, stares, and a few photo ops. 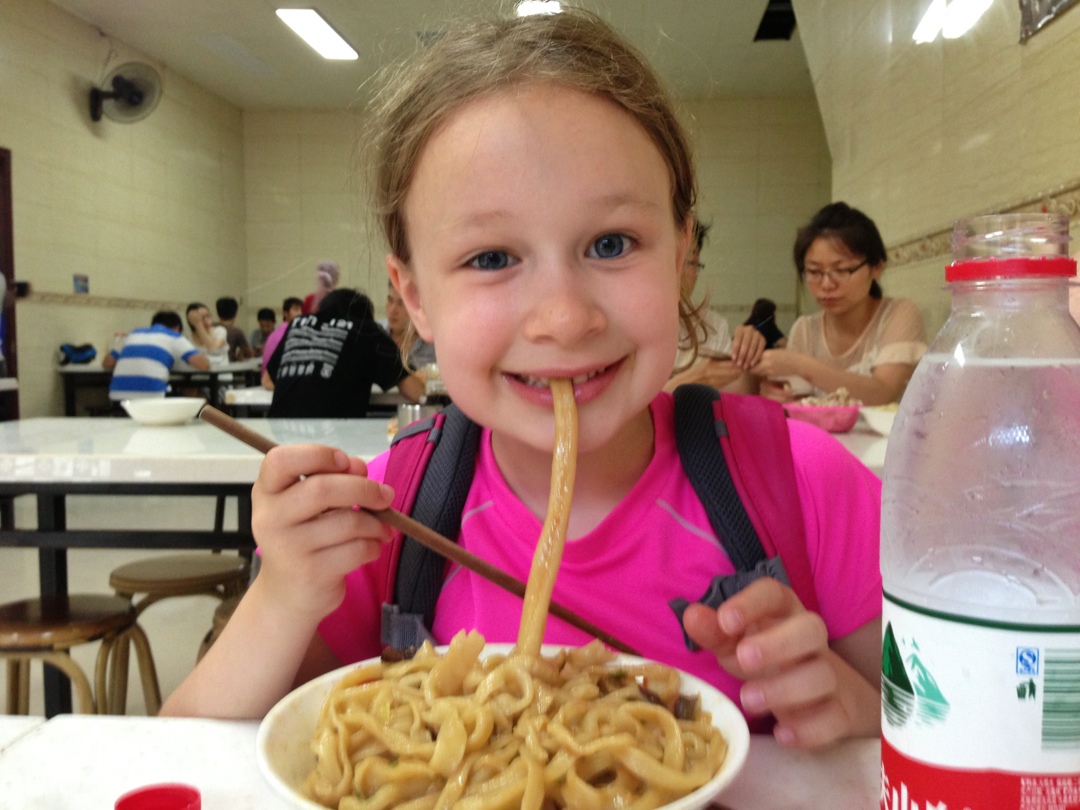 The next morning, Lily met us at our hotel – the Golden Flower by Shangri-La – and we headed to see the Terra Cotta Warriors. The warriors and nearby Emperor’s mausoleum mound from 221BC were discovered in 1974 by a farmer, Mr. Yang, who was digging a well on the site. Mr. Yang became somewhat of a celebrity in 1989 when the Clintons visited and met the former farmer. Today, Mr. Yang has a much easier life, sitting in an air conditioned room signing autographs and taking photos: 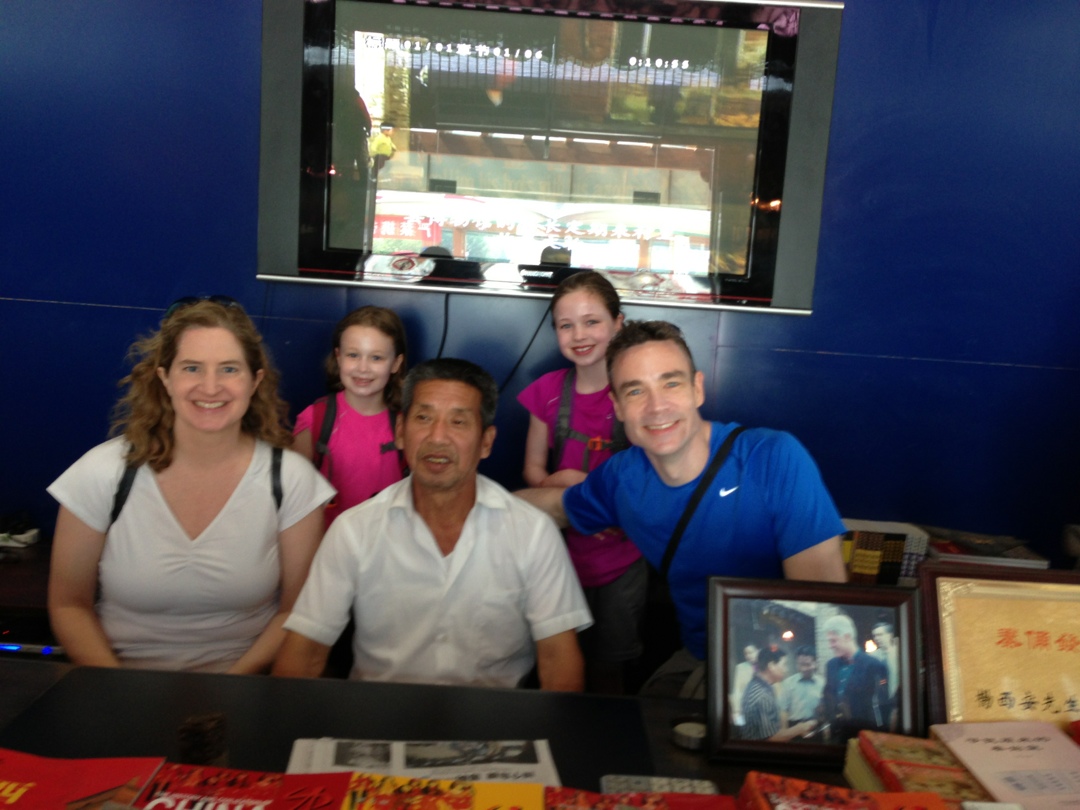 The first and largest pit unearthed contains over 6000 warriors. It’s about the size of a football field. This tomb was ransacked shortly after it was built by peasants unhappy with the excesses of the Emperor. Today, archaeologists work off-hours at night to rebuild the warriors one by one. The first warrior took about 18 months to refurbish and reconstruct. Today it takes about 3 months.

The second and third pits are much smaller. The second was plundered by tomb raiders, while the third — much much smaller — was left almost untouched. 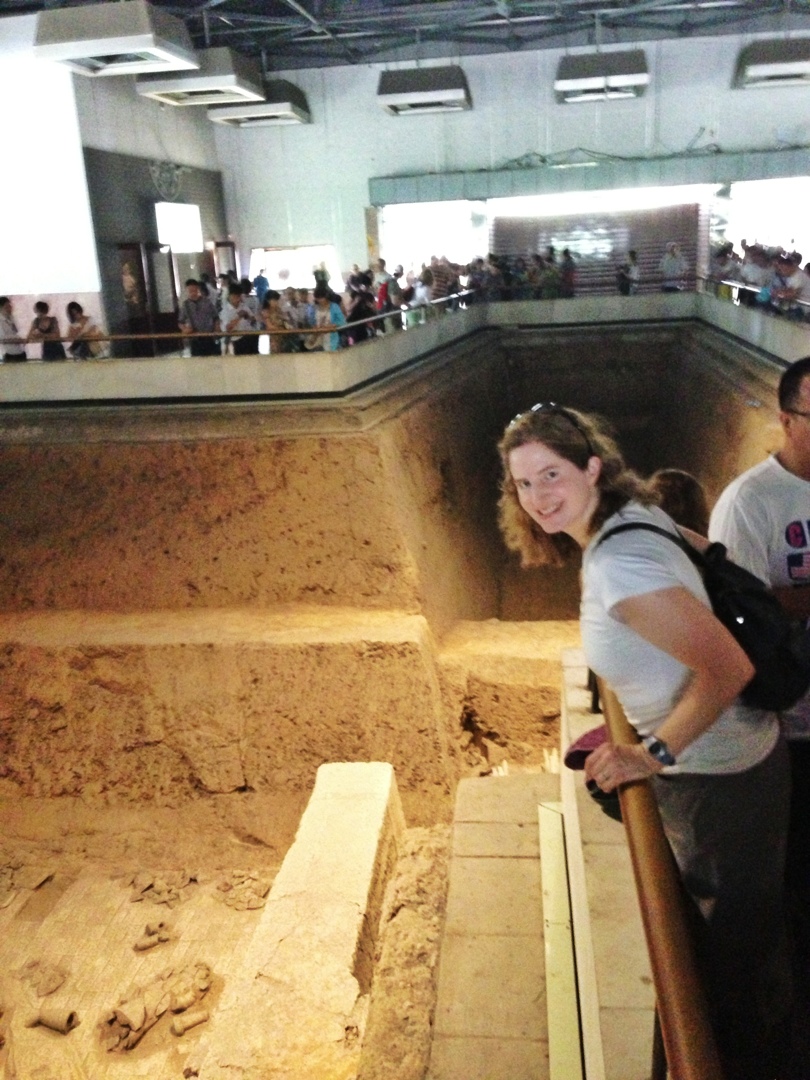 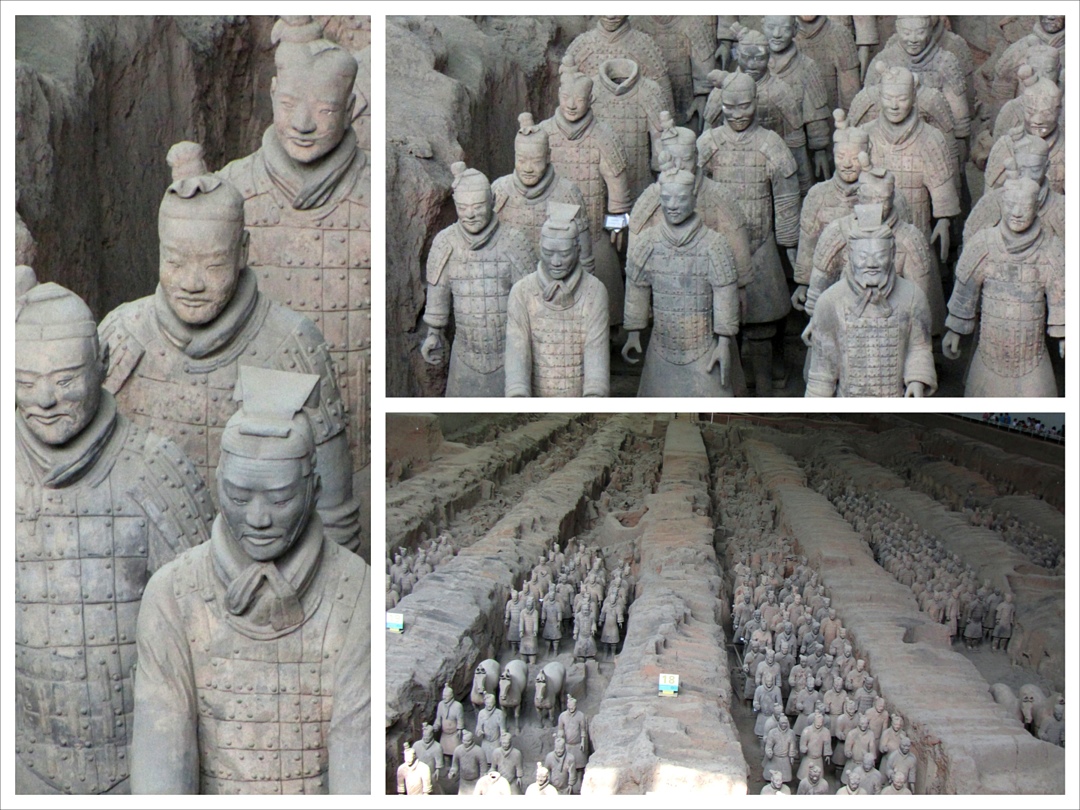 When built, these tombs were covered with wood and grass mat roofs. Even without tomb raiders, the beams have rotted and fallen in over the last 2200 years, filling with dirt and toppling warriors. 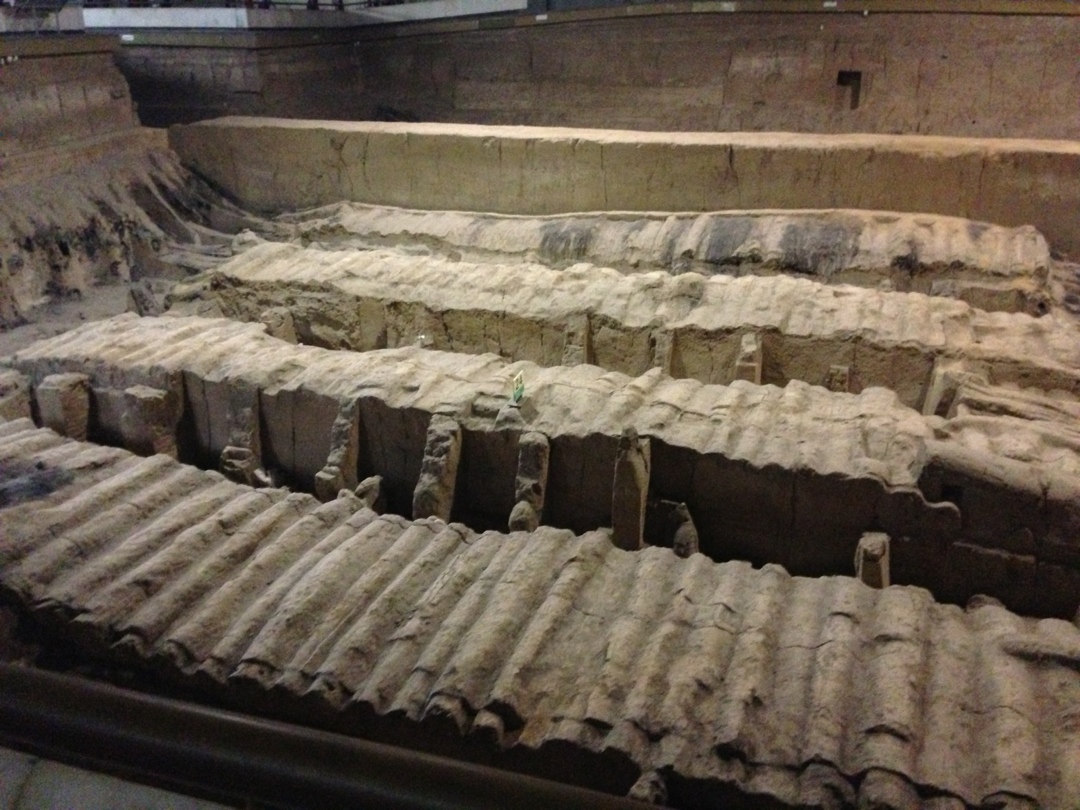 According to an ancient book that documented the construction of these tombs, the Emperor’s mausoleum and mound were laced with mercury to (i) preserve the Emperor, and (ii) poison any who tried to destroy the tomb. Modern tests show a high level of mercury, so it’s probably best that Mr. Yang did not dig his well.
After the warriors, we headed back into the heart of Xi’An.  The Wild Goose Pagoda and Da Ci’en Temple were built to house and store Buddhist artifacts. 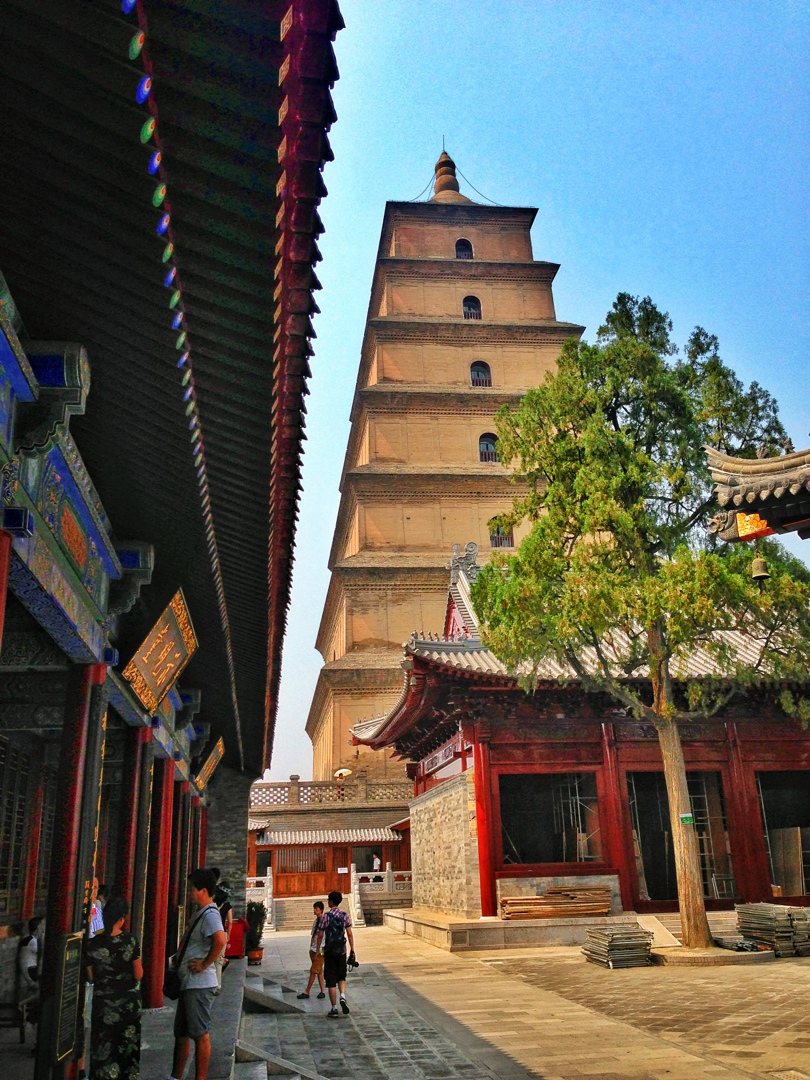 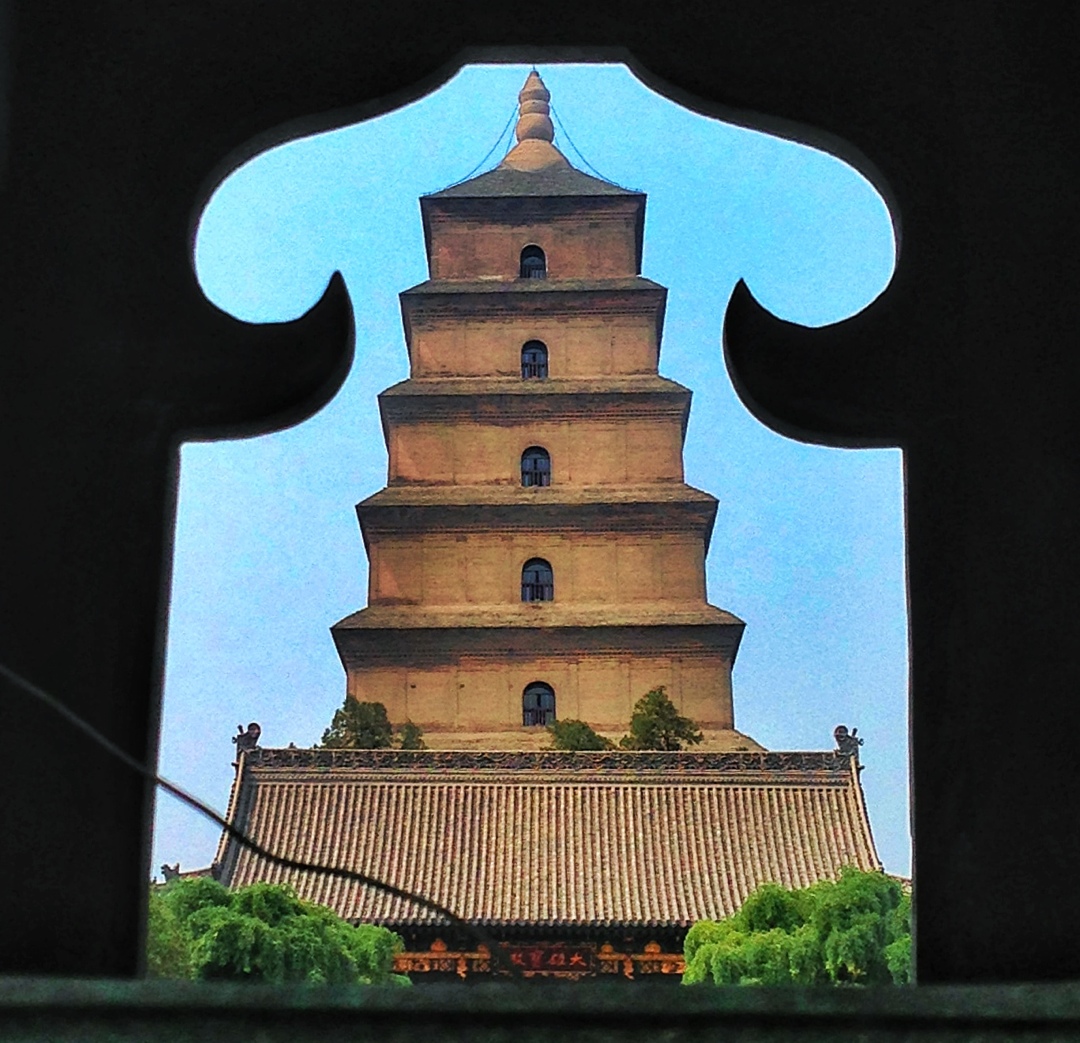 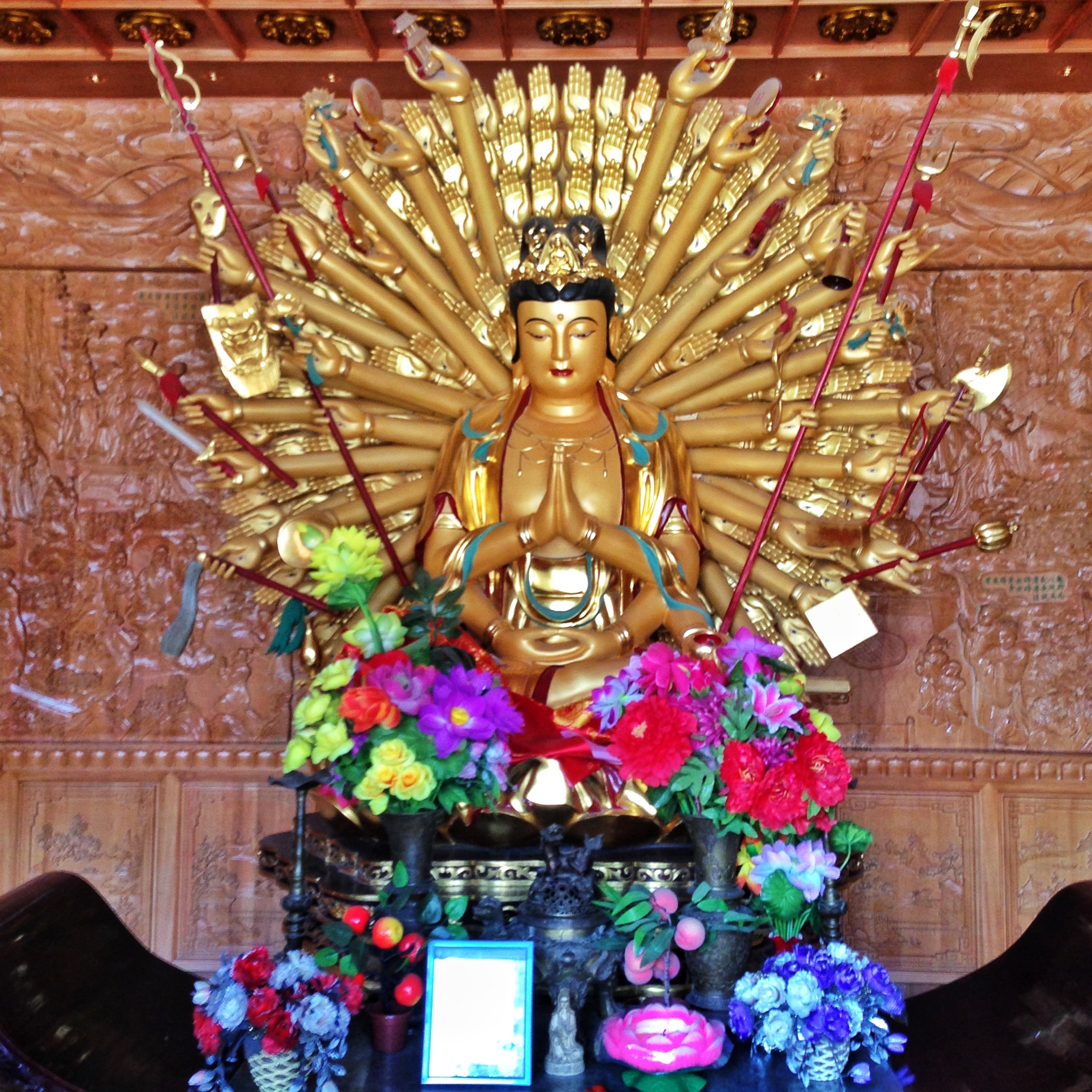 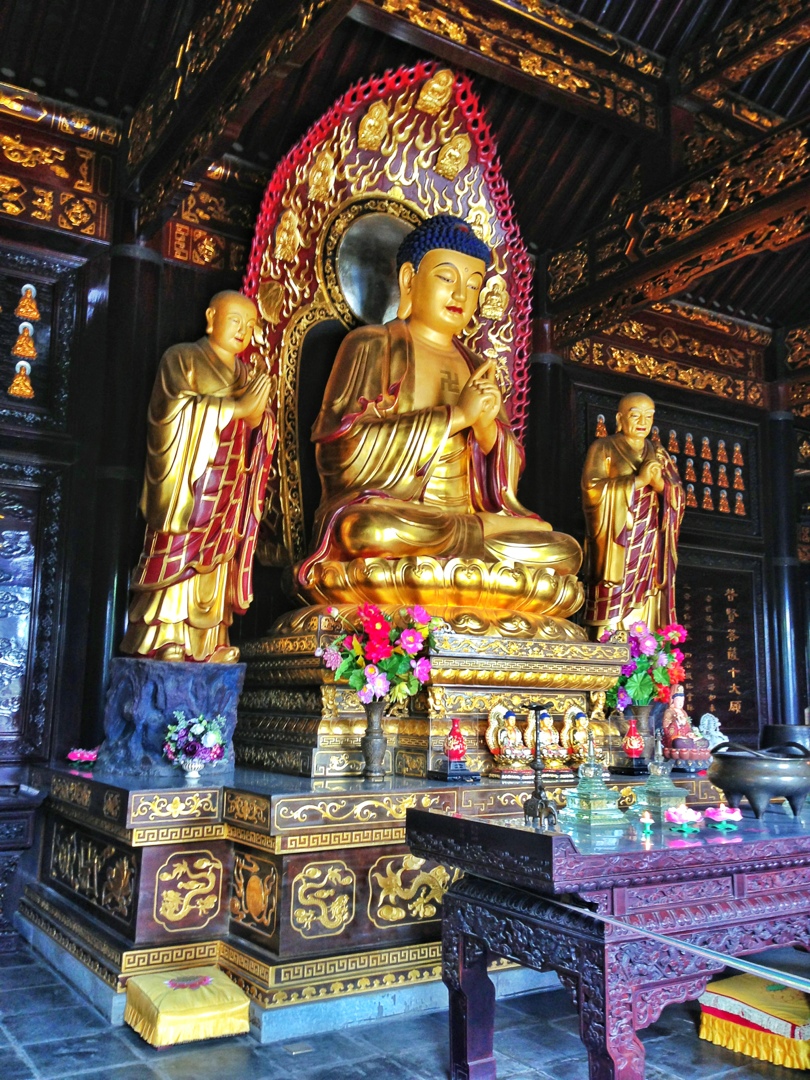 A friend of Lily’s, Mr. Lee, was our guide through the temple. He explained the various Buddha statues and the pagoda. At the end of the tour, he les us to an art studio where he made personalized calligraphy names for each of us. Mike = Big Stepping Scientist. 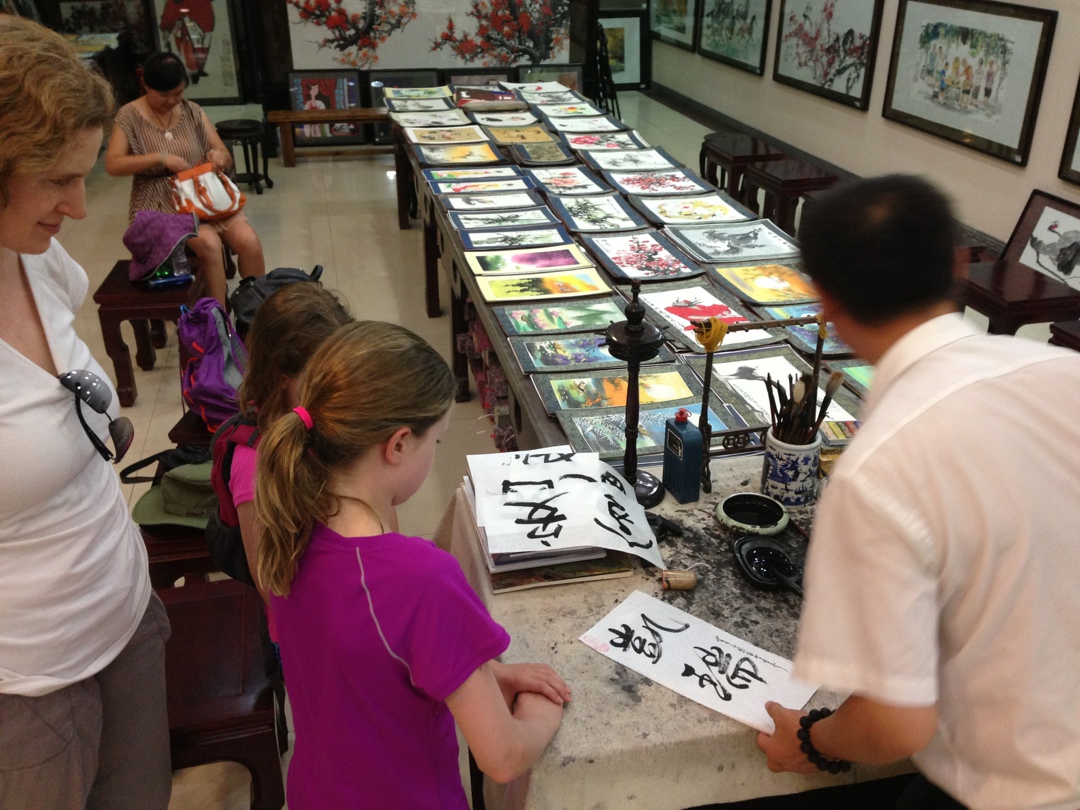 On our last night before the airport, we went to the Xi’An Cultural Show featuring historical costumes, music, and dancing from the affluent period of the Tang Dynasty (618AD to 907AD). 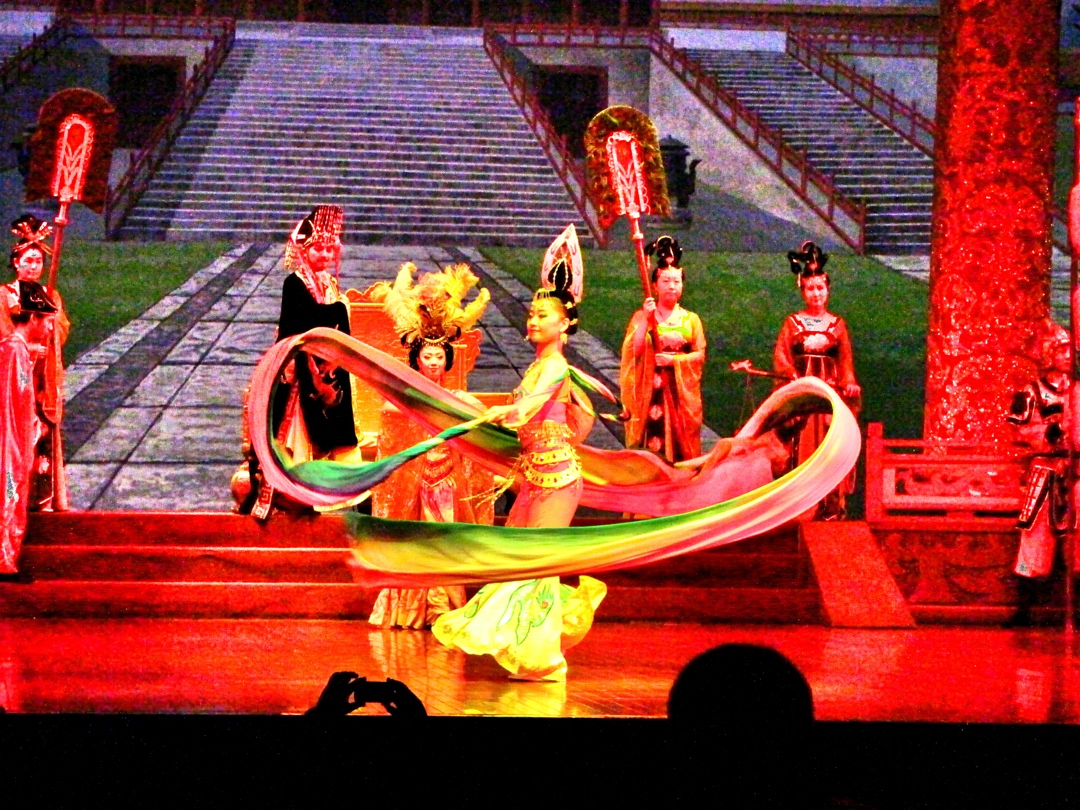 We had a very nice time with Lily. She was super flexible and bent to our vegetarian and kid-centric (I’m bored, I’m hot, I’m hungry) needs. Our driver, Mr. Chow, was also very friendly and helpful and bought ice cold drinks and cookies for our rides. He also took us to the airport on the last day. 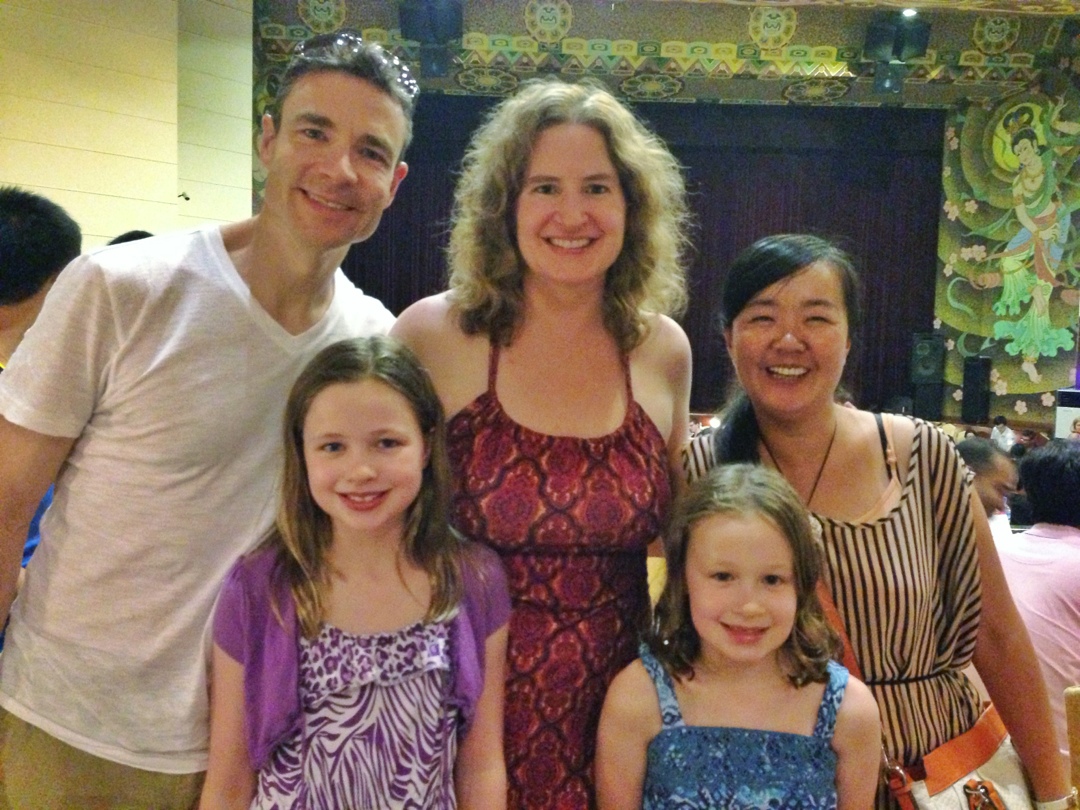